SciTech Tuesday: The Last Man on the Moon 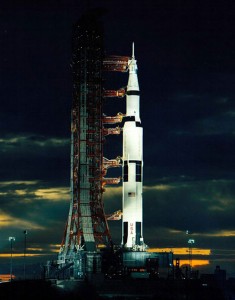 Apollo 17 landed on the moon 40 years ago today, marking the last manned lunar mission.  The Apollo 17 mission itself was unique in a number of ways.  It was the first night launch, it set the record for the longest time in lunar orbit, it carried the only trained geologist to walk on the moon’s surface, and it was the only mission to use a gravimeter to measure the lunar gravitational field.  A J-type mission, Apollo 17 involved a longer three-day stay on the lunar surface, three moonwalks, and a Lunar Roving Vehicle, also known as a “moon buggy.”

Almost thirty years after WWII, Apollo 17 was the final manned launch of a Saturn V rocket developed by NASA under the leadership of Wernher von Braun.  Von Braun played a leading role in designing Nazi Germany’s Aggregate series of rockets, the most successful being the A4 or more commonly known as the Vengeance Weapon 2 or V-2.  Subsequent Aggregate designs, specifically the A10, A11, and A12, became the foundation for von Braun’s Saturn V, used to launch the Apollo missions.

As the decades have passed since the end of the Apollo space program and conclusion of WWII, thematic similarities can be drawn between the two.  Both the Apollo program and WWII brought significant advances in technology including computers, telecommunication, aviation, and navigation.  Both were massive undertakings in project management, logistics, and systems engineering.  And both changed the way we view our world, opening new frontiers of discovery and innovation.

Watch astronauts Harrison Schmitt and Eugene Cernan sing “I was strolling on the Moon one day” during one of the final moonwalks of the Apollo 17 mission.

Join us in 2013 for The National WWII Museum Robotics Challenge!