On 25 September 1942, the Roosevelt Hotel in New Orleans hosted  the Million Dollar War Bond Breakfast. Seats to the breakfast were obtained only by promising to purchase $1000 in war bonds. Such breakfasts were held nation-wide and the New Orleans breakfast doubled the orgaziners’ goal and set the national record with over $2,800,000 in bond subscriptions.

The Roosevelt Hotel (named for Teddy Roosevelt) was the site of many events, dinners, fundraisers and dances during the war. After a name change and closure, the hotel reopened as the Roosevelt in 2009, where many of these wartime venues can be seen in their restored glory. 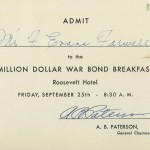 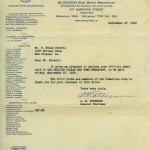 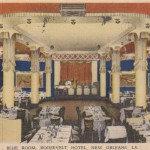