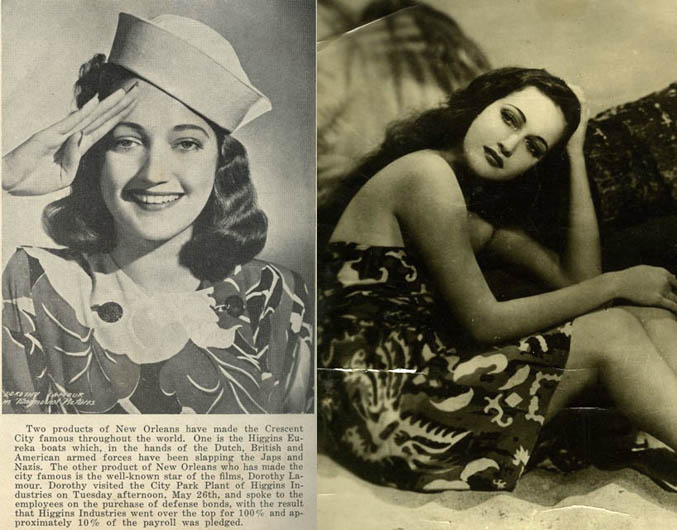 Dorothy Lamour was born Mary Leta Dorothy Slaton in New Orleans in 1914. She lied about her age and won “Miss New Orleans” in 1928. “Miss New Orelans” moved to Chicago and then New York, starting out signing with Rudy Vallee. Her first film was Jungle Princess in 1936, a film that would define her career because her costume was a sarong. Lamour would be known throughout her career as “The Sarong Girl.” During WWII, Lamour was one of the most popular pin-up girls and she traveled the country selling war bonds. She came to be known as the “Bond Bombshell,” selling over $21 million in bonds. On 26 May 1942, Dorothy Lamour traveled back to her hometown to host the Dorothy Lamour Luncheon at the Grand Ballroom at the Roosevelt Hotel. Later that afternoon she visited Higgins Industries. The above-left article is taken from the May 1942 issue of The Eureka News Bulletin from Higgins Industries. Dorothy Lamour died on 22 September 1996.

Before the Food Pyramid Was a Pyramid or When Butter Was Its Own Food Group Why We Fight: Prelude to War