The Lübeck Cathedral in flames in the aftermath of an RAF bombing raid, March 1942

In spring 1942, the air war over Europe became a tit-for-tat game of retaliation, aimed more at destroying civilian morale than wartime industry.  On 28 March 1942, the Royal Air Force bombed the German city of Lübeck in what was the first large-scale RAF raid to do considerable damage to a German city. The town was hardly defended due to its lack of industrial infrastructure, so why use valuable resources on a militarily unimportant city?

British Air Marshal Arthur “Bomber” Harris was a staunch believer in the war-winning power of breaking the enemy’s morale. With his actions justified by the Area Bombing Directive of 14 February 1942 which allowed for the targeting of civilian targets, Harris and his bombers sought to wreak havoc on the German population, starting with Lübeck. The majority of the city’s buildings and homes were affected by the bombing to some degree. Hundreds were killed and wounded, with thousands more left without roofs over their heads. Though considered a success for the RAF, the Lübeck raid would bring about the wrath of the Luftwaffe at the expense of the British population and the fabric of its cultural history.  On 14 April, Hitler instituted the Baedeker Directive, calling for a shift in focus from military to non-military targets.

Today is the 70th anniversary of the first of a series of retaliatory attacks on British cultural and civilian targets. Luftflotte 3 hit Exeter on 23 April 1942 in the first of what would become known as the Baedeker Raids or Blitz. The series takes it name from the well known Baedeker travel guides, as the targets became less militarily significant and more culturally relevant. One German statesman was quoted as saying, “We shall go out and bomb every building in Britain marked with three stars in the Baedeker Guide.” Over the next few days days, subsequent attacks struck Bath, Norwich, and York. Canterbury would be hit a month later, likely a direct retaliation for a massive RAF raid on Cologne the night before that killed hundreds, wounded thousands, and destroyed more than 10,000 homes. 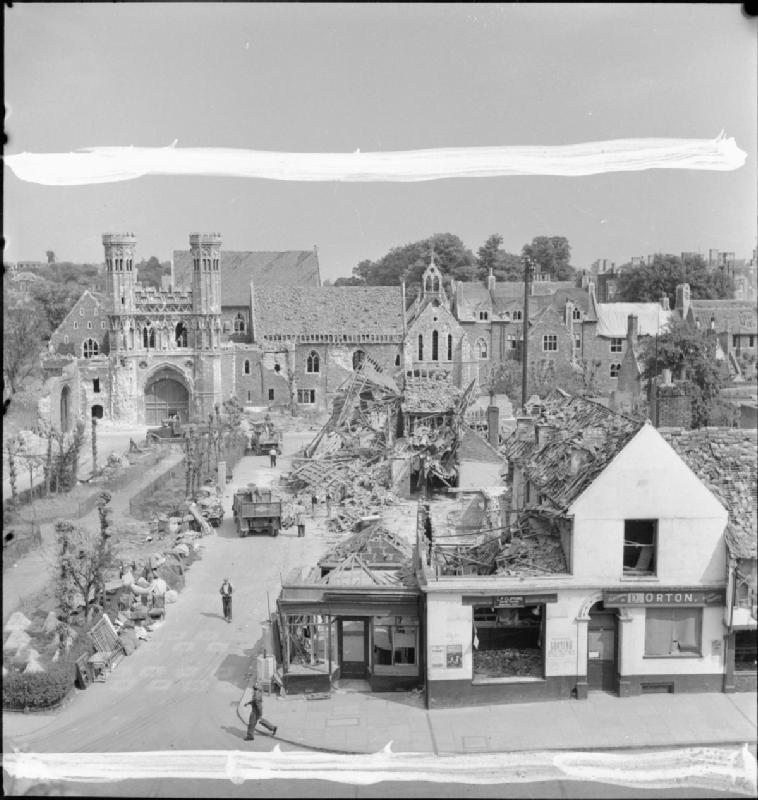 A view of St. Augustine Abbey in Canterbury and the damage in the surrounding area.