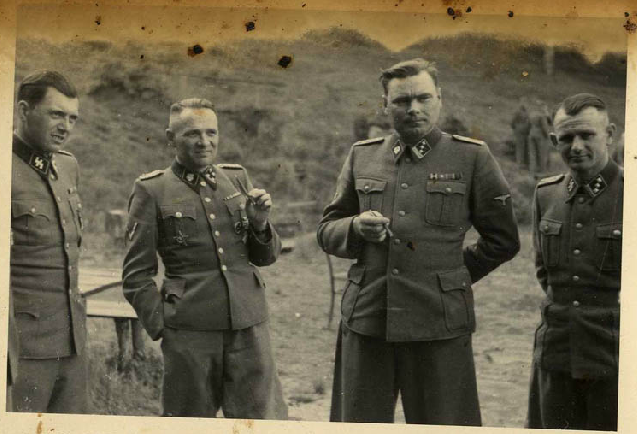 Dr. Josef Mengele (1911-1979) is a name associated with inhumanity at its worst in the modern world. Unlike Adolf Eichmann, for example, whom Hannah Arendt famously personified as the “banality of evil,” claimed only to follow rules and do simple paperwork which ultimately led to mass murder; Mengele, on the other hand, basked in the freedom which the racist ideology of the Third Reich afforded him. Most infamous for performing savage experiments on living—and unwilling—subjects, mainly children, Mengele is also often remembered by survivors for his cold decision-making during the selektion process at the entrance of Auschwitz-Birkenau. He was one of several doctors who decided who would live to work, and who would be sent to the gas chambers immediately.

Mengele held two doctoral degrees, one in anthropology and a second in medicine. It was while studying in Frankfurt that Mengele met and came to idolize Dr. Otmar von Verschuer, who was known for his work in genetics and more specifically twin studies, interests which Mengele latched onto.

In 1937 Mengele joined the NSDAP, and later volunteered for service with SS Medical Corps. In this capacity, he worked as a genetics researcher with the SS-run Race and Resettlement Office (RuSHA) in Posen. RuSHA’s foremost mission was to maintain the so-called racial purity of the SS by means such as approving the marriages of members of the SS—only after several weeks of invasive scrutiny of a chosen partner and her family background. In 1942, Mengele was sent to the Eastern Front with the 5th SS Panzer Division Wiking, where he was wounded while serving as a combat surgeon and transferred back west due to his injury.

Upon his return to Germany, Mengele was promoted to Captain and joined his mentor, von Verschuer, at the Nazi-sanctioned Kaiser Wilhelm Institute of Anthropology, Human Heredity, and Eugenics. KWIA had been headed by Eugen Fischer from the late 1920s to the early 1940s, and was replaced by von Verschuer in 1942. Both men were members of the Nazi party, and both were well-known for their work in fields championed by the Nazi party as scientific justifications for their race-based ideology. While Mengele was at KWIA, the institute was treated as a necessary element of German wartime industry due to its contributions to the studies of genetics, heredity, and perhaps most relevantly to the Third Reich, eugenics. Thus Mengele followed in a long line of scientific research aimed at the categorization and potential cleansing of races. In some ways, the research conducted at KWIA  paved the path to the atrocious Aktion T4, the program of euthanizing or sterilizing those considered to be unfit for reproduction or life. Though Mengele would eventually be tried for war crimes, his colleagues never were, perhaps due in part to von Verschuer’s disposal of the work done at KWIA during the war. 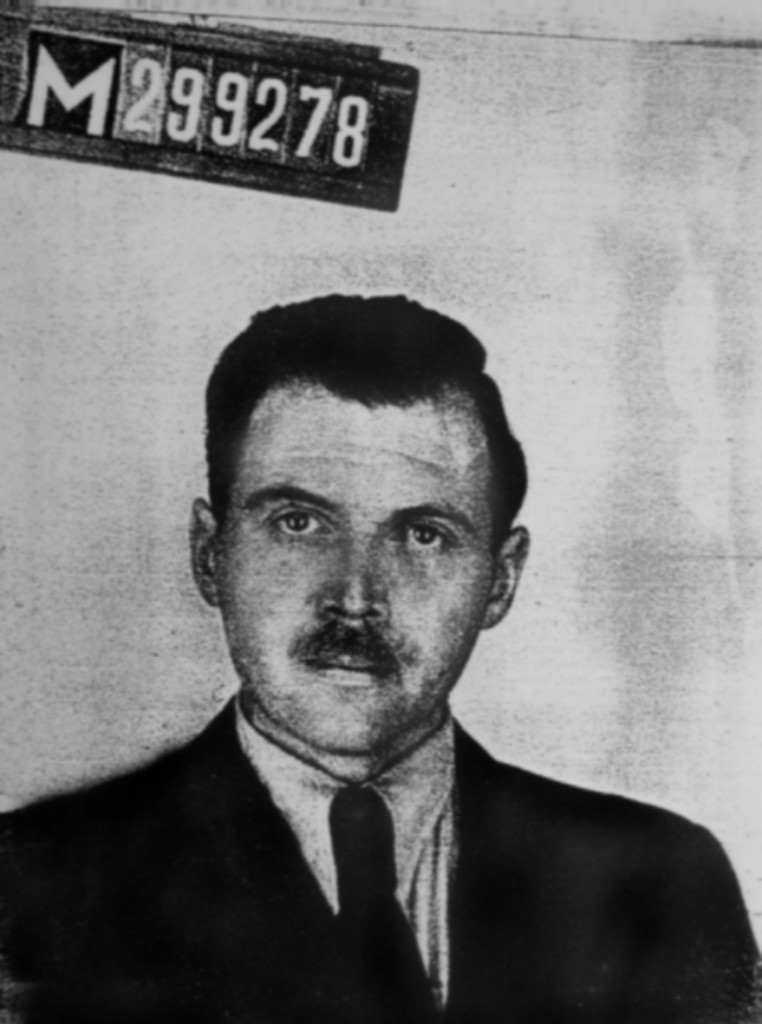 Portrait of Mengele for a false ID, taken in Argentina in the 1950s.

After a few months at KWIA, Mengele was transferred to Auschwitz-Birkenau. There, under the auspices of the German government, Mengele conducted experiments on live specimens of his choosing, and condemned to death those he saw as too feeble or useless for life. He ultimately sent approximately 400,000 people to their deaths in the camp’s gas chambers, and personally murdered several more, mainly twins, babies, and dwarfs, on whom he experimented without conscience. Mengele sent the corpses, organs, skeletons, and blood samples of Jewish and Gypsy children to other scientists, including von Verschuer, for further study. Ironically, Mengele was also well-known for “courting” his victims and giving them special treatment. Those on whom he planned to experiment were generally given better housing and food to keep them healthy, and he would often bring the children treats and milk.

By January 1945, Auschwitz-Birkenau was evacuated, and Mengele repeatedly moved to other smaller camps until he was captured.  Released in June 1945, he remained in Germany under a pseudonym. In 1949, he successfully fled to Argentina. When Eichmann was found in the country in 1960 and brought to trial, Mengele’s paranoia of the same fate escalated, and he moved again to Paraguay and later to Brazil. He died there on February 7, 1979, of unclear causes, either drowning or having a stroke while swimming.

I’m Charlotte Weiss, I’m a Holocaust survivor. First thing, I was in the ghetto Mátészalka [in Hungary] where the Germans put me, then in concentration camps in Auschwitz, and Geislingen an der Steige, then Allach near Dachau…I went through all this and with the grace of God I survived. When we were about three day in the trains, we finally reached Auschwitz. We were standing and sitting and we were terribly afraid. My mother looked out through the doors…and she says “I didn’t know that they had crematoriums.” She already saw the smoke coming out of the chimneys…and she knew what the end was going to be….

There was Dr. Mengele. He was the head guy there, Dr. Josef Mengele. He looked like an erect, tall guy, I don’t know if he had a heart or if he was human. He certainly didn’t look human to me. He looked like an animal that was ready to kill the world. Anyway, we walked over to him, my four sisters and I approached him and he had a finger that determined who should live and who should die. He said “To the left. To the right. To the left.” And my sisters and I went to the right, which meant life. And my mother and my little brother, who was only 12-years-old, a sick child, he had a heart condition. He saw that the child was not well and he told them right away “To the left” which meant to the crematorium. And my mother went to the left too…

There was one time that Mengele, you know, was trying to pick…the girls—we were all girls) young girl, 15, 16, 17 18-year-old girls. And there was another selektion just a few days later. We were undressed, naked again, because he wanted to see how strong our bodies are, so we were naked. And he looked at us and I was chosen to go into a transport with my three sisters, but not Rosalie. He saw Rosalie again, he said “Step aside.” And I knew what that meant. There was a lot of people in one of the rooms that Rosalie had to go in, that had a window and my sister Rosalie was jumping up and down and biting her hands, “Don’t leave me, Don’t leave me!” Screaming and crying, “Don’t leave me!.” And I thought to myself, “God, what can I do to save my sister.” And I decided I’ll take my life in my hands, and I’m going to do something. I ran up to Dr. Mengele, and my three sisters followed me, and I said, “Herr Doctor, ich bitte Sie, I beg you, Herr Doktor, let my sister live. She’s our youngest sister and we want to be together. I beg you, ich bitte Sie, lassen Sie meine schwester leben [let my sister live]. Ich bitte zie!.” And my sisters cried and we cried and begged him and danced in front of him…To approach this monster of a human being was a death sentence in itself. You could not approach him…and I had enough guts to approach him. Dear God, where did my strength come from? He turned around. He gave me the honor of answering me and he said to me, “You’re five sisters? All five of you can stay here and go with your sister wherever she’s going to go.”

All five sisters survived the Holocaust.

One Response to “Josef Mengele: Angel of Death”

The death of Mengele as being 1979 is not entirely a guaranteed historical fact. Mengele was 174 cm and his skeleton displayed a height of that. But in that time Mengele became short..osteomyelitis and spongiform…disc disease, was stooped and his own son said 2 years before this date how he was “short”. The famous gap teeth were replaced with heavy dental work we are told and the skull displays this. So, the 2 bone disease showed no traces, the height was wrong by inches, although correct with the SS records
30 years previous, and the dental work was never photographed despite late in life pictures. The DNA? I claim if a new DNA test could be arranged away from intel activity you would find the burial was false. How come I am now so confident, because after 9 years it occurred to me to look at those late photographs in the supposition the 1979 death was a shill, and I see the man who with another 30 years was the man who interrupted my research into Monarch Programming…in 2002. That is right, my website tells the story…I met Mengele IN CONTEXT in 2002. Your parroting of 1979 as his last year is based on what somebody wants you to hear. Mengele was working on Monarch Programming in 2002. Ipsimmus or intel asset, that suggested my research was valid.now on my site.