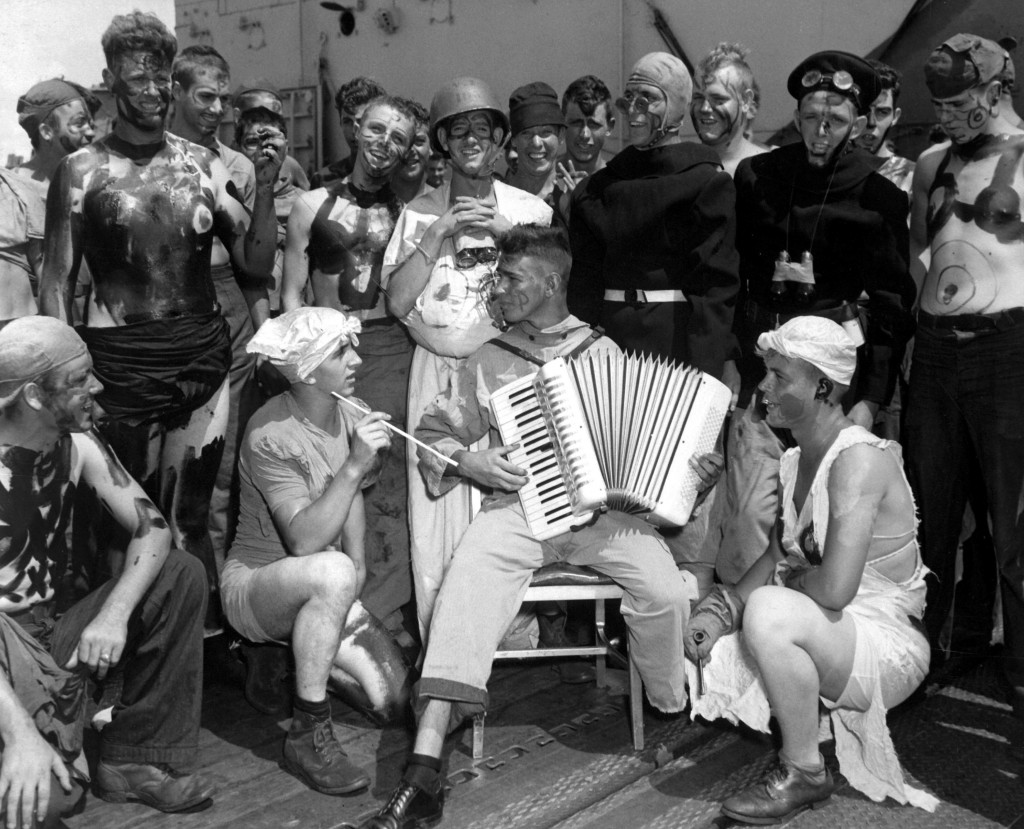 The USS Enterprise crosses the line, 1943. Courtesy of the National Archives.

Though Halloween as we know it wasn’t the norm in the 1940s, due in some part to sugar rationing, the US Navy and one of its many quirky traditions serves nicely as a Halloween tie-in. Crossing-the-Line ceremonies involved elaborate costuming and references to age-old legends and characters like the eerie Davy Jones & regal Queen Amphitrite.

The celebration of “crossing the line” was for servicemen’s first time sailing over the Equator, Prime Meridian, or International Date Line. Although not always practiced in wartime, the ceremony served as both a bonding experience and morale booster, even if in reality the organized hazing often resulted in men having to spend time in the sick bay. The event almost always included the same sets of characters and rituals. All activities were reigned over by King Neptune and his Queen Amphitrite, who were aided by Davy Jones and his band of pirates all of whom served as the “court.” The court was made up of Shellbacks, or those men who had already crossed the line and been initiated. 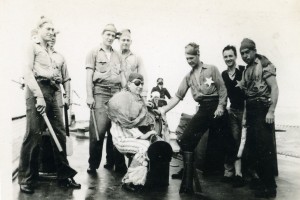 The ceremony was essentially several rituals meant to humiliate the “Pollywogs,” or those men who were crossing the Equator for the first time. The event would begin with Shellbacks forcing a Pollywog to spit in someone’s food or another offense for which the Shellbacks would have cause to seek out and punish the Pollywogs. The uninitiated were then said to be in revolt, and the purpose of the ceremony was to find the Ringleader of the revolt. 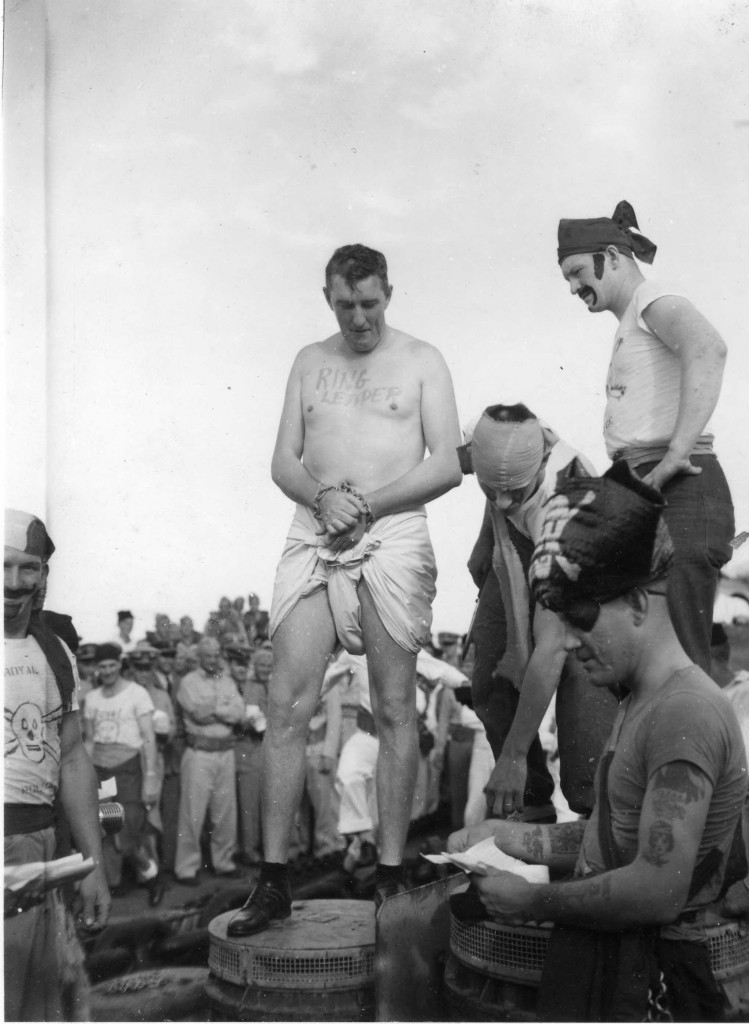 The Ringleader aboard the USS New York is questioned before Davy Jones’ court. Gift in memory of Grover C. Ore, 2009.059

A beauty pageant of men in dresses and mops for hair would be a lighthearted marker of the beginning of ceremonies. The Pollywogs were then given costumes such as diapers or a ball and chain to wear around their neck. First they would visit the “doctor” for an examination, and would be given medicine—usually a mixture of raw eggs and something equally foul. 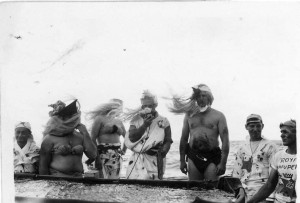 The lovely ladies of the USS Slater. 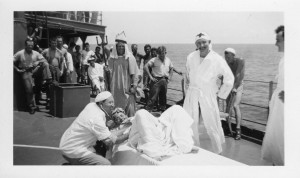 Next, the butcher would chop off their hair completely or take liberty in giving them unique designs. The butcher would sometimes cover the Pollywog in a sticky water and flour mixture. Once his hair had been cut, the inductee would be dunked backwards into a makeshift pool. Shellbacks await him there and would continue to dunk the Pollywog until they are satisfied he’s had enough. Both the doctor and the butcher’s white coats were covered in fake blood. 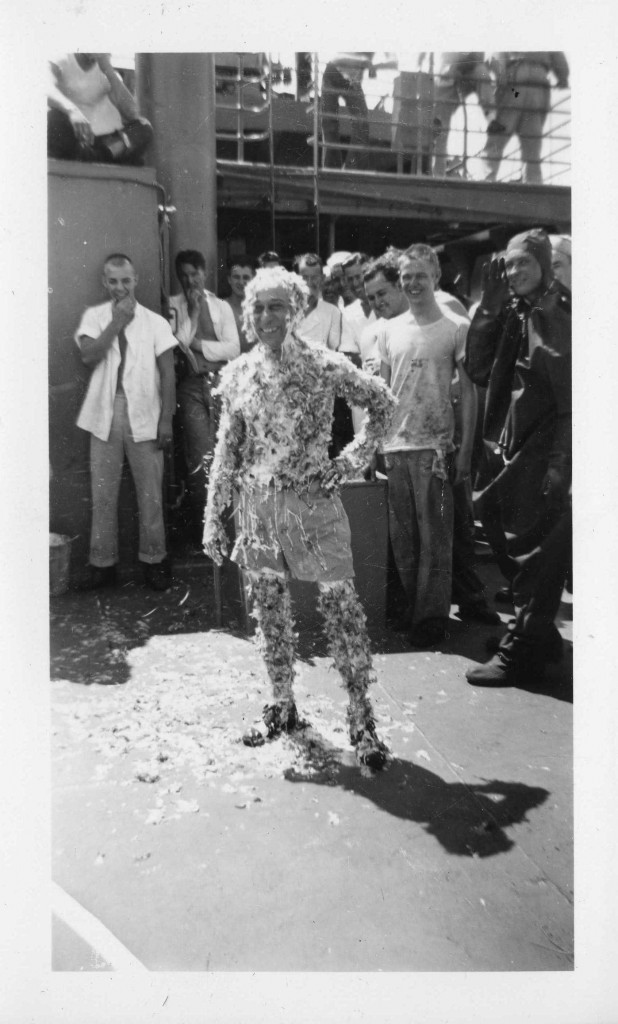 Pollywogs had to perform nearly impossible tasks such as trying to push clothespins across the scorching hot deck using only their noses while on their hands and knees, while being sprayed with the massive force of the deck hose and intermittently getting paddled by Davy Jones. They were often made to beat one another with the paddle, or blindfolded and given boxing gloves and told to swing as hard as they could. Queen Amphitrite usually carried a scepter which was electrified, and would take the liberty of prodding the uninitiated with it.

Once the ceremony was completed, the one-time Pollywogs have become Shellbacks and are awarded a certificate and membership card that will exempt them from the ceremony in the future. The next time they cross the Equator, they will be the Shellbacks on King Neptune’s court.