Archive for the ‘Knit Your Bit’ Category 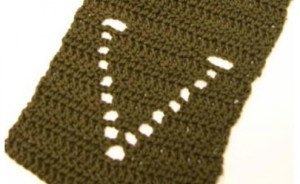 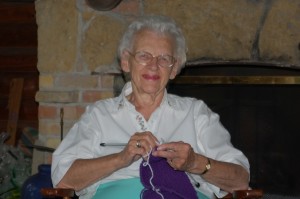 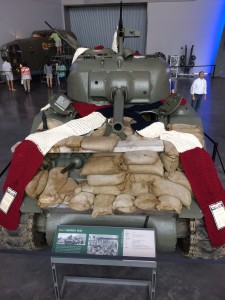 Home Front Friday: DIY Knitting Needles So You Can Knit Your Bit

Knitting during World War II: During World War II, civilians on the Home Front knitted scarves, hats, gloves, and socks for soldiers on the front. Everyone was encouraged to “Knit Your Bit” and donate warm knitted items to their local Red Cross stations. These knitted items helped keep American soldiers warm during the freezing European winters as well as reminded them of their home sweet home. 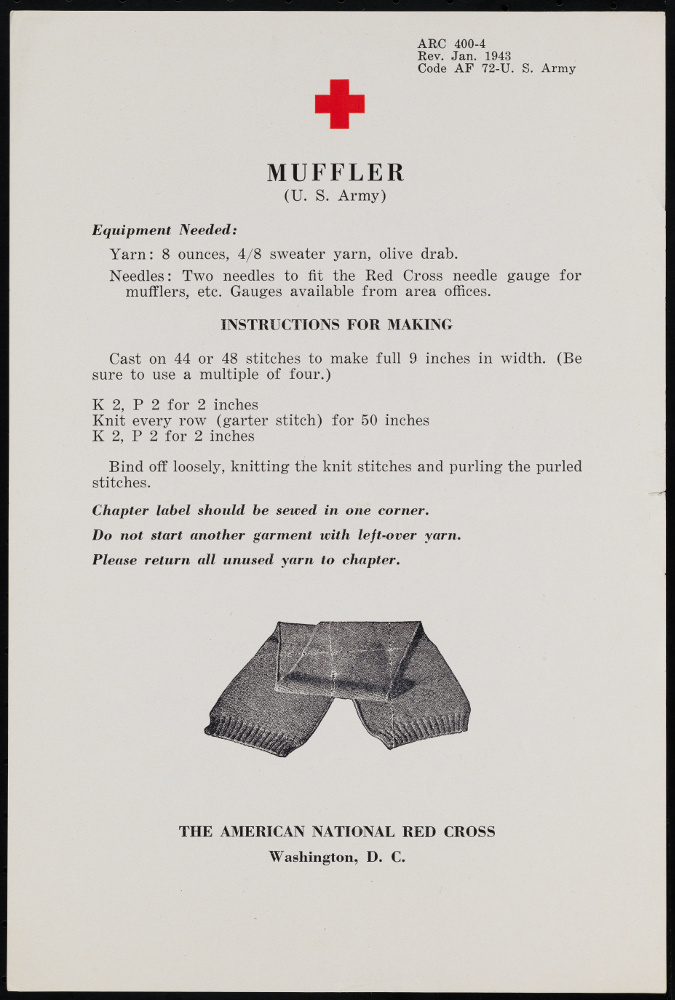 In 1943, the American Red Cross listed these instructions explaining how to knit a Muffler. Courtesy of the National Endownment for the Humanities.

Knit Your Bit: The WWII knitting program has inspired the creation of the Museum’s Knit Your Bit program. In the past 10 years, the Museum has collected over 50,000 scarves to donate to veterans. If you would like to knit a scarf for a veteran or create a scarf in gender neutral colors and send it in to the National WWII Museum in New Orleans or to one of our community partners around the country follow this link.

DIY Knitting Needles: Do you want to knit a scarf, but don’t have the needles? Are you looking for a creative way to engage your kids in knitting?

You should try making your own needles because its simple, inexpensive, and a great hands on learning lesson for you or your kids.

Step 1: Sharpen one end of each of your dowel rods using the pencil sharpener. They should be as sharp as a pencil when you are done with this step.

Step 2: Sand your dowel rods. Use the sand paper to make the dowel rods as smooth as possible so that you won’t get any splinters in your hands or in your yarn while knitting. Make sure to sand the pointed end so that it is rounded rather than sharp.

Step 3: Make the other end of the needle. Roll your clay into two balls. Push those balls onto the non-sharpened ends of your dowel rods. Mold the clay into whatever shape you desire but maintain a right angle between the dowel rod and the beginning of your clay. This will keep the yarn from falling of the needles.

Step 4: Bake the needles. Set the oven for the temperature on your clay package. Allow it to fully pre-heat. Stick the needles on a baking sheet with foil underneath. Bake the needles for no more than 10 minutes. Watch the needles the entire time and be ready to pull them out the moment the wood begins to change color to avoid burning the wood. 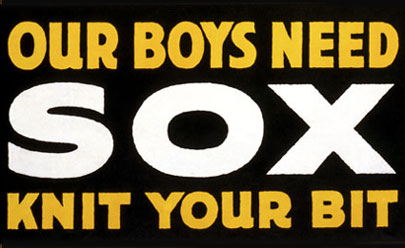 During World War II you might have had a friend ask you to help the soldiers out by picking up your needles and yarn and knitting your bit.  The Red Cross popularized the slogan as early as World War I and then revived it with propaganda, leaflets and campaigns to get people to knit for soldiers.

On the Home Front during World War II, knitting served as one more way Americans could support the war effort. The November 24, 1941, cover story of the popular weekly magazine Life explained “How To Knit.” Along with basic instructions and a pattern for a simple knitted vest, the article advised, “To the great American question ‘What can I do to help the war effort?’ the commonest answer yet found is ‘Knit.’” Thousands of Americans picked up their needles to knit socks, mufflers and sweaters to keep American soldiers warm and provide them with a handcrafted reminder of home. 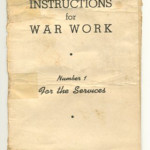 Knitting Instructions for War Work * Number 1 For the Services. Issued by the Canadian Red Cross Society, November 1940. From the Education Collection at The National WWII Museum. 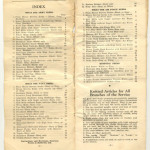 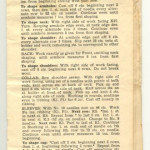 1940 Knitting instructions for a sweater and a scarf

The Red Cross supplied patterns for sweaters, socks, mufflers, fingerless mitts (which allowed soldiers to keep their hands warm while shooting), toe covers (for use with a cast), stump covers and other garments. Cold, wet, sore feet were the enemy as surely as German or Japanese troops.

“The Navy needs men, but it also needs knitters,” newspapers cried.  After the war, some knitters dropped their needles for good. Others kept on knitting throughout their lives in a wide variety of colors — any color, many swore, but Army-issued khaki or olive drab!  Today knitting is popular once again and many enjoy the process of creating something useful.  Luckily, the spirit of sharing is alive and well too.  The Museum has been fortunate enough to be the receiving ground for a great civic service project for the past 8 years, running our own “Knit Your Bit” campaign, so you can send in your hand-made scarves to be distributed to veterans around the country.

Want to get involved?

Learn more about how you can Knit Your Bit.

Join us for a Knit-in and keep that generous knitting spirit alive while thanking our veterans.

Thank yous all around

This past Veterans Day weekend we hosted a Knit-in at the Museum.  We hold these monthly, and for years, it has been the highlight of my week sitting with knitters and crocheters as we share Knit Your Bit with weekend Museum visitors.   Although we’ve sent out thousands of scarves to veteran organizations both locally and around the country, one thing we hadn’t done was put them directly into the hands of veterans visiting the Museum.  I’m so glad we did.  The veterans and their families were so pleased with their scarves that they kept telling us thank you, when really we were thanking them for their service.  Here are a few pictures captured Saturday afternoon: 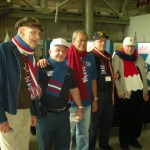 This group was visiting the museum from out of state and all went back north with scarves to keep them warm. 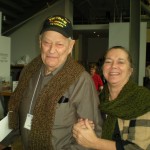 These veterans chose scarves that one of our knitters had just finished and brought with her to the knit-in! 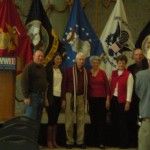 This veteran proudly wears his scarf and gets a picture snapped with his family in front of the service flags.

The next Knit-in at the Museum is scheduled for Saturday, December 17th from noon-four.  Any knitter or crocheter who can make it to the Museum that day is welcome to join us.  We plan to hand out more scarves to veterans to again say thanks and happy holidays!

This past Saturday, Knit Your Bit participated in our local Standown with the Veterans Administration for our third year.  It is so meaningful to tell a veteran “Knitters from around the country hand-knitted scarves and sent them to us at The National WWII Museum with the expectation that we would give them to a veteran.” And then to look them in the eye as they choose a handsome scarf and say “Thank you for your service” is humbling.  Here are some pictures of scarf distribution in action: 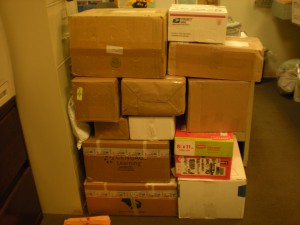 Knit Your Bit keeps the mailroom busy with packages from knitters and crocheters all over.

END_OF_DOCUMENT_TOKEN_TO_BE_REPLACED

I’m very pleased to announce the release of The National WWII Museum’s Knit Your Bit program’s new pattern.  I think you’ll find the pattern to be super easy and the veteran who receives your scarf will find it super cozy. 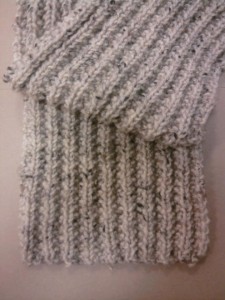 For those of you who may not be aware of Knit Your Bit, let me share the story:  In 2006 we lauched the program calling on knitters throughout the country to send in scarves that we would then donate to veterans nationwide.  The inspiration for the program came from knitting campaigns during World War II where people would get together and knit for soldiers.  We hoped for 100, and now 15,000 scarves later, we have built relationships with knitters, knitting groups, veterans and veterans centers throughout the country who share the giving spirit and exchange kind words and deeds with strangers.

Veterans are eager to receive scarves, so if you knit or know someone who does, please visit the Knit Your Bit page for this year’s as well as previous patterns.  We’ve created crochet versions as well.  So pick whatever pattern makes you smile and knit a scarf for a veteran!

View the newest pattern and check out all of our previous patterns, as well as the latest Knit Your Bit news.