Last autumn my neighbors were having a birthday party in their front yard. The highlight of the decorations was a bundle of helium-filled mylar balloons. It was windy, and they worked themselves free. I was working in my yard, and looked over when I heard sounds of dismay, and I watched the balloons slowly drift towards the power pole across the street. The balloons contacted the transformer, there was a very loud bang, and all the lights on our block went out.

In England during WWII they had barrage balloons along the coast and over cities and military installations. They were large, tethered blimps, designed to make enemy aerial navigation difficult by placing obstacles in the way. Their long cables threatened to entangle encroaching aircraft.  The barrage balloons occasionally broke loose, like the mylar balloons I witnessed. But the defensive blimps, being anchored by heavy metal cables, caused much worse damage to electrical infrastructure.

In September of 1940 a large storm knocked loose a number of barrage balloons, which glided across the North Sea and caused considerable damage to power lines and radio antennas in Denmark and Sweden. After that, Churchill ordered that the possibility of using ballons like these as weapons be investigated. The Royal Air Force responded with a negative report, believing it to be too costly at a low likelihood of effect. The Navy responded enthusiastically.

Winds at high altitudes (>15,000 feet) tend to move from East to West over the North Sea and Europe, so the conditions were favorable, and the Royal Navy had a surplus of 100,000 weather balloons. Tests were conducted, and plans made.

These balloons were designed to be inflated to 8 ft in diameter. At launch a slow burning fuse was lit, and the balloons ascended rapidly, stopping at 25,000 ft as an internal band stopped further expansion. As the hydrogen used to inflate the balloons slowly leaked away they descended. The fuse would eventually release a small opening in a bucket of mineral oil, and as it leaked away the balloon descended faster.

About half the balloons carried a wire payload. The same fuse that released the mineral oil would also release a coil of wire held by hemp rope to the balloon. The balloon was calculated to maintain an altitude of at least 1,000 feet so that it would keep moving (below that the air can become very calm). In theory, the wire could short circuit high voltage lines, or break transformers.

The other half the balloons carried an incendiary payload. This was either cans of incendiary jelly, bottles of phosphorus grenades, or canvas tubes filled with explosive and fuses. These were all designed to create small fires. These also were items already on hand and easily and cheaply made.

There is a kind of genius in turning an accident, with knowledge, existing supplies, and some creativity, into a weapon.

In the latter half of 1942 the British launched between 1,000 and 1,800 balloons a day from a golf course in Felixstowe and a bay near Dover. All releases were clustered over 3 or 4 hours of a given day. Over 99,000 balloons were launched, and caused a great deal of havoc, confusion, and cost for the Germans. The biggest impact was from a balloon that hit a power line near Leipzig, and caused a fire that burned down the electrical station.

Launches were suspended during Allied bombing raids, for fear they would interfere with aircraft. In mid 1944, because of the great frequency of bombing raids, the release schedule was changed to single releases every 10 minutes during daylight hours. The last balloon was launched in September of 1944. 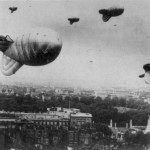 Release of weather balloons with offensive payloads from Felixstowe, some time between 1942 and 1944.