Yesterday the winners of the Nobel Prize for Medicine or physiology were announced. Sharing the prize were Drs William Campbell and Satoshi Omura, who together found drugs to treat parasitic diseases like river blindness, and Dr Youyou Tu who discovered a drug that fights malaria.

The earliest drug research teams, formed by German chemical companies in the late 1800s and early 1900s set up systems to screen chemicals for disease treatment with animal tests. They found some success with this model, discovering new forms of quinine (to treat malaria), sulfanomide (an antibacterial that saved many lives in WWII), and mepacrine (also used to treat malaria, under the trade name Atebrine in the US) and some other drugs as well. In England, researchers worked more on a model of learning about the biology of diseases, and then finding ways to stop important disease processes. In this way they discovered penicillin, which they took the US in 1942 to find a way to mass produce it for pharmaceutical use.

The Campbell-Omura team worked much like the German pharmacologists. Dr Omura isolated samples of bacteria from soils and looked for strains that grew well in the lab. He isolated chemicals they produced and shared them with Dr Campell. In his lab Cambell tested the chemicals on farm animals with parasitic infections. One chemical, Avermictin, was very effective at killing off the parasites. With some chemical modifications the drug was made more effective and renamed Ivermectin. It was eventually deemed so important that it is on the World Health Organization’s List of Essential Medicines. It is widely effective against parasitic roundworms and lice.

Dr Tu began the work for which she was awarded in the 1960s. Quinine and its derivatives were losing their effectiveness against the malaria parasite (a single-celled microorganism called Plasmodium falciparum) as the microbe evolved resistance to the drugs. Looking to traditional Chinese medicine, Tu and her colleagues began to look for chemicals in the plants and fungi used to treat diseases for centuries past.

Tea of sweet wormwood (Artemisia annua, a relative of the plant from which absinthe is extracted) was prescribed by traditional herbalists for treating malaria. Tu extracted many chemicals from many herbs, but an chemical she named Artemisinin was found very effective at killing the malarial parasite and clearing it from patients’ bodies. Unfortunately, the plasmodium has continued to evolve, and Artemisinin is now only an effective treatment when used with other drugs.

It is interesting that in over 100 years of research, the basic model for drug discovery has changed little. The three scientists who have won this year’s prize all lived through WWII, having all been born in 1930 or 1936. It is also disturbing that today we are struggling to find effective treatments for the diseases were worried would take the lives of soldiers 75 years ago, and that kill millions still today. 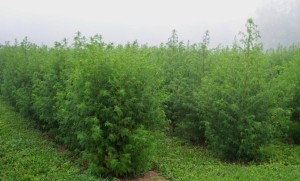 Sweet wormwood being grown on a farm. Pharmaceutical companies are still looking for new uses of the plant, including chemotherapy.