In WWII Aircraft became a vital part of the machinery of war. In the 35 years between wars, technology of airplanes advanced quickly. One part of this was sophisticated electronics. Another was in the diversity of aircraft types for a wide range of functions.

The diversification of aircraft in World War II is a great case study in the scientific idea of Form and Function. A driver behind the development of all these different aircraft was engine technology.

Even though there are more than a dozen kinds of planes at the WWII AirPower Expo 2015, there are two basic types of plane engines. Two different aspects of engineering drove these two different types of engines–cooling, and air intake.

A linear style internal combustion engine, of the same basic design as in the automobiles of the time, powered the P-51 Mustang and P-40 Warhawk and P-39 Airacobra (and the P-38 Lightning, which will not be represented at the Expo). These V-12 engines were liquid-cooled, and powerful. The Allison V-1710 and related engines powered the P-40 series planes. Made by a division of General Motors, this engine had a displacement of 28 L and the initial versions had about 1,000 horsepower. The P-51 was driven by a licensed version of the Rolls Royce Merlin. Manufactured by Packard, the V-1650 in the P-51 was also a liquid-cooled V-12. This engine had a displacement of 27 L and about 1,400 horsepower.

All the rest of the planes used rotary, air-cooled engines. Pratt & Witney made 9-18 cylinder engines used in the B-24 Liberator, C-47 Skytrain, F4F Wildcat, B-17 Flying Fortress, C-45 Expeditor, A-26 Invader, and F4U Corsair. The Pratt & Whitney R-1830 Twin Wasp had 14 rotary cylinders in two rows of 7, and displaced 30 L, with a rating of between 800 and 1,350 horsepower, depending on the variant. Almost 175,000 Twin Wasps were built, as they powered the B-24, and C-47, two of the most built airplanes in WWII. Wright Aeronautical built rotary engines used in the B-25 Mitchell, B-29 Superfortress and SBD Dauntless.

The rotary, air-cooled engines had the advantage of not needing a separate cooling system, but the linear V-12 engines were easier to tool so that the propeller could be powered in either direction.

Both types of engines faced a challenge at high altitudes. It’s not just the crew that faces oxygen deficits in the thinning atmosphere. The combustion of fuel in the engine depends on oxygen in the air. All of these engines used either turbochargers or superchargers, or a combination of both, to increase engine power.

A supercharger uses a fan, powered by the engine, to force more air into the combustion chamber. A turbocharger (or turbosupercharger) uses engine exhaust to power the fan that drives air into the engine. Both technologies allowed engines to have more power at low altitudes, and to make functioning at higher altitudes more efficient.

For more information about the WWII Airpower Expo 2015, where you can see all these of these engines working in flying planes, visit the Expo Site. At the Expo, our education booth will feature hands-on activities about the electronics that controlled these planes. 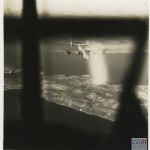 A view of a B-24 through the window of another B-24. Both are powered by Pratt & Whitney Twin Wasp engines. 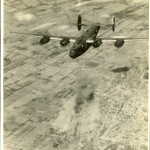 This is a good view of the 4 Pratt & Whitney Twin Wasp engines on a B-24 over Europe. 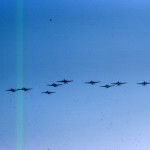