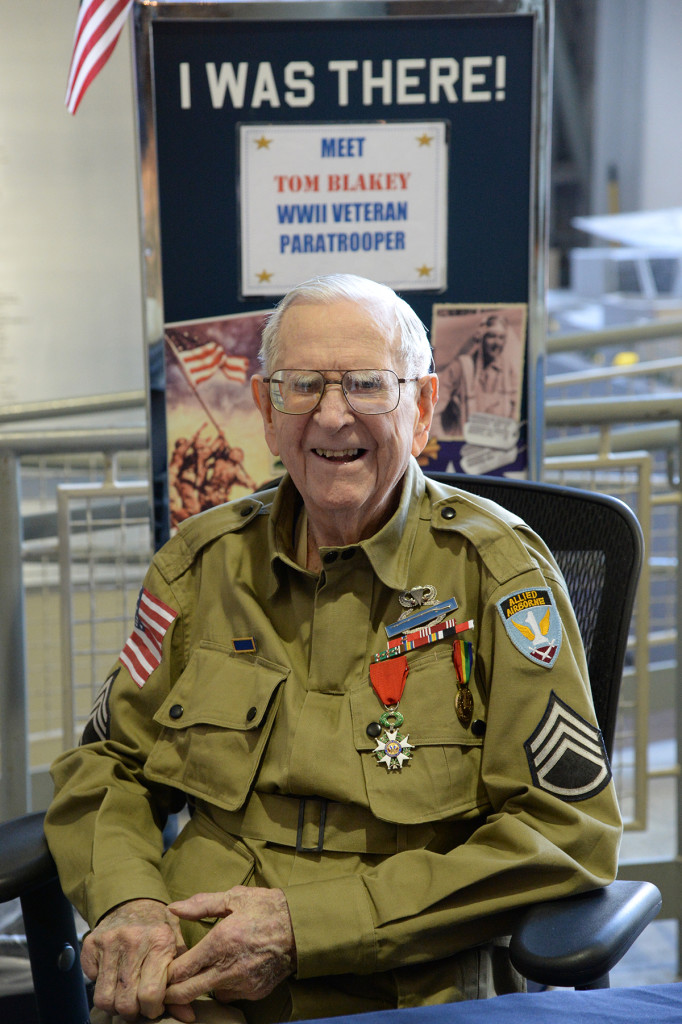 Tom Blakey sitting at his volunteer post at The National WWII Museum.

On Thursday, January 15, 2015, The National WWII Museum acknowledged a sad milestone in the death of the Museum’s legendary volunteer Thomas Blakey, a former U.S. Army paratrooper who fought in the European Theater. Blakey died at his home early Thursday morning.

Blakey, a retired oil company executive, has long held status as the Museum’s No. 1 volunteer. He donated approximately 15,000 hours to the Museum since its opening in 2000, serving as a speaker and interpretive guide. He also is a favorite interview subject for national media organizations reporting on anniversaries of the D-Day invasion at Normandy, and was recently interviewed by Tom Brokaw in New Orleans and Normandy in conjunction with the 70th anniversary. He was also among recipients of the French Legion of Honor medal.

“We lost a great American, a hero of World War II, and one who meant a great deal to the Museum,” said Museum President and CEO Gordon H. “Nick” Mueller. “He was an iconic figure here and a dear friend. He will be greatly missed.”

Giving his status in the interpretation of WWII history, Blakey’s passing serves as a reminder of the rapid disappearance of the war generation.

According to statistics from the Veterans Administration, the number of veterans from the war has dipped below 1 million, a small fraction of the 16 million Americans who served. The nation is losing these men and women and their memories at a rate of 492 a day.

Blakey was a treasured presence at the Museum, as he typically greeted visitors in the Louisiana Pavilion each morning and shared details of his personal war story, including participation in the D-Day invasion, the Battle of the Bulge and other battles. 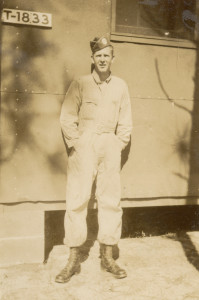 Blakey walked through the doors of Museum, originally known as The National D-Day Museum, before it opened to the public in 2000. Of the more than 4 million visitors who have visited the Museum, many were fortunate enough to hear his story, shake his hand, take a photo and hear his thundering laugh.

A native of Nacogdoches, Texas, Blakey came from humble beginnings. His father left when he and his brother were young and his mother instilled a strong sense of responsibility in her boys. While he often told young people they could be anything they wanted to be if they just worked hard enough, he was also generous to those in need of assistance throughout his lifetime. He liked to say he was just lucky but would also add that “what one does with luck matters.”

When WWII called, Blakey answered, serving as a paratrooper with the 82nd Airborne. In the early hours of June 6, 1944, he landed in a church cemetery and made his way to a small but strategic bridge at La Fiere just west of Ste. Mere Eglise. There he was a part of a fierce defense of the bridge, well remembered in the history of the U.S. Army. After the Normandy Campaign, Blakey participated in Operation Market Garden in Holland and fought in the Battle of the Bulge. When asked what he remembered about the Bulge campaign, he would answer bluntly: “Cold, snow, ice and death.”

During the Bulge battle he was pulled off the front lines to serve as an aide to Lt. Gen. Lewis Brereton of the 1st Allied Airborne Army. After the war ended, he stayed in Paris as an aide to General Brereton. He often told stories of life in Paris after the end of the war and the many challenges civilians faced in rebuilding their lives. He was proud to have helped in any way he could and thrived in an environment where he could act as a problem-solver.

Blakey returned to Normandy eight times after the war, most recently as part of a Museum trip commemorating the 70th anniversary of D-Day. With every trip, he said it would most likely be his last, but admitted that he would always want to return one more time. He said he felt at home there, close to Americans who fought and died during the invasion. And he had a deep love for the French people who always treated him with gratitude. 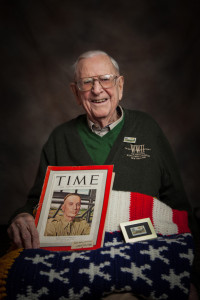 Towards the end of his life, Tom revealed a secret he had lived with for nearly 70 years when he spoke to a group of recent war veterans. Tom had suffered severely from effects of PTSD, admitting that it had affected him and his personal relationships for decades. He felt it was important to share because he believed it might help these young men who were also dealing with the challenges of returning from combat. Soon after, he told his story on CBS Sunday Morning, along with how his work at the Museum had finally freed him. Even in his last moments, he was making plans to return to his volunteer post at the Museum.

Blakey would often call the institution a “Museum of people.” The personal stories of everyday Americans mattered the most, he said.

One of his greatest joys was explaining to younger visitors how a child’s toy, known as the “cricket,” played an important role in D-Day. U.S. troops would click the noisemaker, which sounded very much like the insect it was named for, in the darkness when they sensed someone was near. If they clicked back with the correct response, as Tom would say, “You knew you had a friend.”  The Museum always had a devoted friend in Tom Blakey.

There will be a public memorial service for Tom Blakey on Monday, January 19 at 10 am at The National WWII Museum in the US Freedom Pavilion: The Boeing Center.

Learn more about the remarkable life of Tom Blakey: 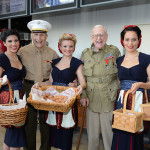 Blakey with fellow WWII veteran Bert Stolier and the Museum's Victory Belles on Veterans Day in 2013. 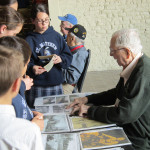 Blakey volunteered at the Museum multiple times throughout the week sharing his WWII story with our visitors. 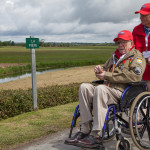 In June 2014, Blakey traveled back to Normandy for the 70th Anniversary of D-Day commemorations. Here he is revisiting the area around La Fiere where he took part in one of the “costliest small-unit action in the history of the US Army.” 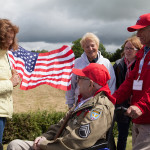 Blakey being greated with great gratitude during his trip back to Normandy in June 2014. 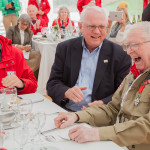 Blakey with Museum President and CEO Gordon H. “Nick” Mueller, and historian Donald Miller in Normandy during the 70th Anniversary of D-Day commemorations in June 2014. 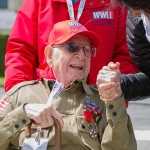