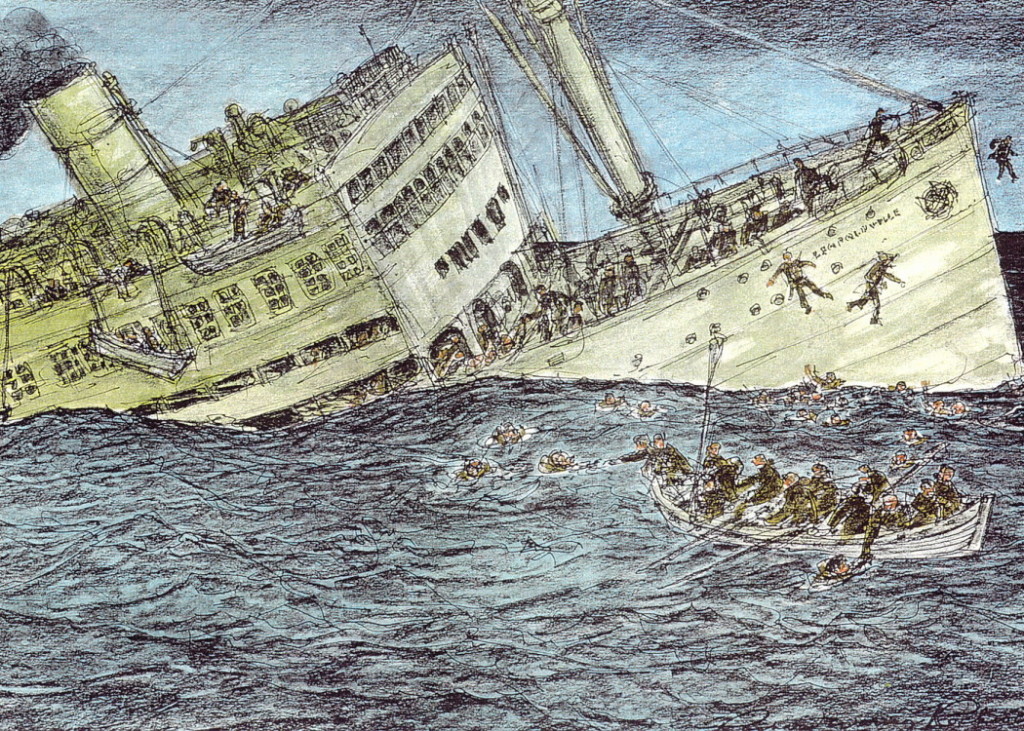 The Leopoldville sank by the stern at about 8:30 pm on December 24 just 5.5 miles of the coast of Cherbourg, France. Illustration by Richard Rockwell.

On the evening of December 24, 1944 as civilians on the Home Front began their holiday celebrations, the SS Leopoldville, a ship carrying more than 2,000 American soldiers deploying to fight in the Battle of the Bulge, left Southampton, England for Cherbourg, France. Just five miles from its destination while crossing the English Channel, the troops aboard who were singing holiday carols were jolted by a strike from the German submarine U-486.

Confusion and chaos surfaced on the ship. About 300 soldiers were killed by the blast.  A total of 763 soldiers either died in the blast or perished in the frigid 48 degree waters just five miles from the shore of France. 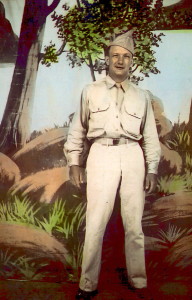 Today this tragedy is one of the worst in US history, but it is still unknown to many. Even during its time the news of this Christmas Eve sinking was hidden. Military censors concealed the sinking of the SS Leopoldville to the American Home Front so morale wouldn’t be broken and to keep the Axis from knowing that so many soldiers for the war would never make it.

During the war, at the war’s end, and now seven decades later, loved ones of family members who perished and experienced the disaster seek answers and recognition for the lives lost and altered that day. Today, Allan Andrade, author of Leopoldville: A Tragedy Too Long Secret, one of the few books on the disaster, and Don Nigbor and his son Peter, family members of Henry Nigbor, a private from Dunkirk, New York whose body was never recovered from the sinking, have started a website to honor the lives of the men lost and of the survivors.

The site, www.leopoldville.org, recognizes them and offers the opportunity for survivors and family members of those affected by the sinking of the SS Leopoldville to share their stories and honor them.  Nigbor explained that, “There were a lot of questions that were never answered for the families. The troops aboard the SS Leopoldville that day represented nearly all states across the country. People all over the nation were left in the dark about what happened that day. Even survivors remained uncertain of what they experienced.”

For Nigbor’s family they never received an official explanation of Henry’s death or recovered his remains. Nigbor describes that his grandmother Belle never gave up hope for the return of her son until her death in 1969. For many families, this was the case. Official death notices after the sinking of the SS Leopoldville were sent out slowly over months and were vague of details in an effort to keep information about the disaster away from the public. 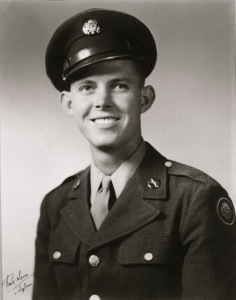 Sgt. George Robert Atkerson before his time on the Leopoldville. Courtesy of Nancy Russell.

Even for the survivors of this tragedy, lives were still shaken after the war.  Nancy Russell, the daughter of Sgt. George Robert Atkerson from Webb City, Missouri who was aboard the SS Leopoldville that tragic day, can attest to the torment her father experienced throughout his life from that disaster.

“Not once did he ever mention the experience, nor the trauma he suffered the rest of his life.  Not until 1996 did he ever even mention the name “Leopoldville,”” she said.  “After his death, my sisters and I found a diary of sorts that he kept… his exact words in one of the letters was that this ship “was a bucket . . .  that had a smell of death about it.”

Now this incident has not made it into many history books, but awareness is building about this tragedy through Nigbor’s initiative of honoring the men of the SS Leopoldville and connecting their family members. Russell describes that, “I am so glad I found [www.leopoldville.org]…My father would have been so thankful to connect to other survivors and finally been able to share with people who had been there. It was an experience that bound their souls in brotherhood for all eternity.”

Learn more about the SS Leopoldville and explore the lives that were aboard the ship at www.leopoldville.org.

Do you have a story to share about SS Leopoldville? Connect with others here.