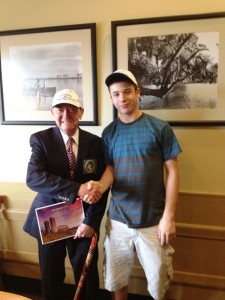 At the National History Day Awards Ceremony last June 14, Luke found out that he won a trip to New Orleans for the Grand Opening of the US Freedom Pavilion: The Boeing Center. After finding out about the award and the trip, Mr. Whipple began making plans to meet Luke in New Orleans during the events. It is just over 350 miles from Benton to New Orleans, making Grand Opening weekend the opportune time for a face to face meeting.

As the opening grew near, Mr. Whipple’s health did not allow him to travel. His doctors informed him that he needed to stay close to Shreveport and would not be able to travel to New Orleans to meet Luke. With little hesitation, Luke and his mother changed their travel plans to instead fly in closer to Shreveport to meet Mr. Whipple and his family. From Shreveport, Luke would travel to New Orleans to arrive in time for his role at the dedication ceremony for the US Freedom Pavilion: The Boeing Center. The event was covered by Shreveport news station KTBS.

It was a privilege for The National WWII Museum to hear about this story and to play a small role in helping arrange this meeting. Students like Luke Jackson from Milford, VT show the dedication and passion for history that is apparent in students who participate in National History Day. In getting to know Luke, it was evident that his respect for those who made history and fought for freedom will play a role in the bright future that is ahead for him. Luke reflected on the experience in his own blog.

UPDATE: Lewis “Dale” Whipple passed away on January 28, 2013 in the company of his family.
Luke contributed a speech that was read aloud at the funeral on January 31, 2013. http://www.legacy.com/obituaries/shreveporttimes/obituary.aspx?pid=162732039