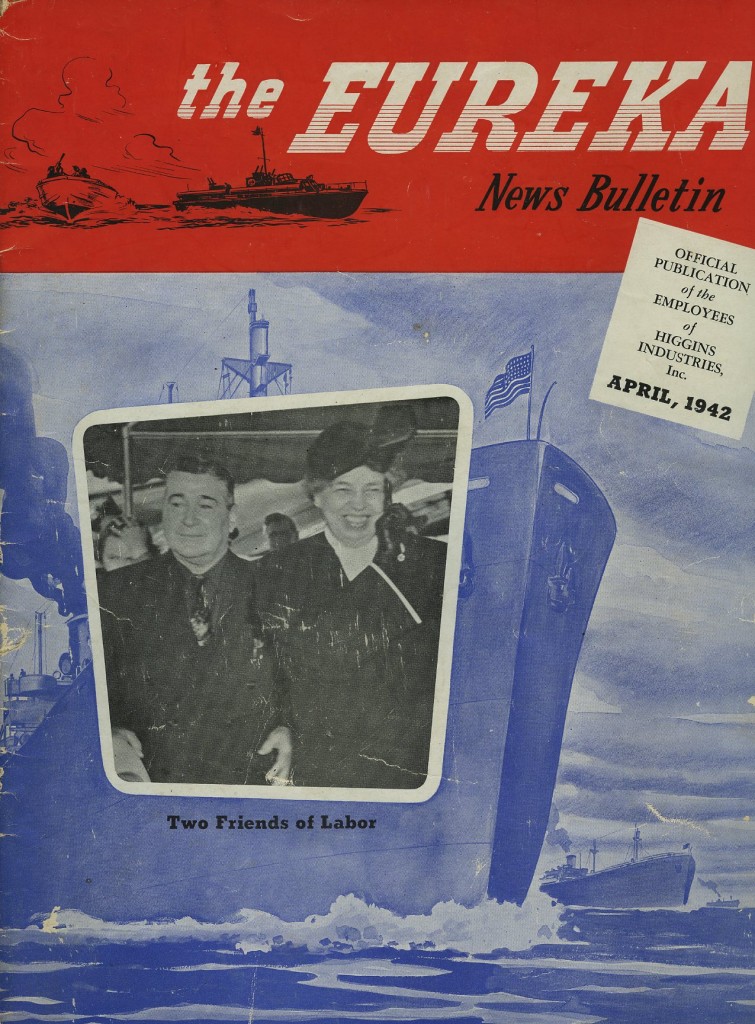 The April 1942 Eureka News Bulletin contained this description of the cover: “Two friends of labor. The first lady of the land, Eleanor Roosevelt, escorted by Andrew Jackson Higgins, arrive in Nashville, Tenn., Sunday, April 19, to attend a labor meeting.”

The meeting they attended was not strictly a labor meeting; it was the third convention of the Southern Conference for Human Welfare (SCHW). Founded in Birmingham, Alabama in 1938, the SCHW was a progressive group focused on uniting black and white citizens and workers in order to tackle social problems and achieve economic stability in the South. The SCHW challenged both the white primaries (primary elections in which African Americans were not allowed to vote) and the poll tax (fee for voting which would not be completely abolished until 1966).

At the meeting in April 1942, over 500 delegates gathered in Nashville’s War Memorial Auditorium. Inside the conference Jim Crow laws were ignored, with white and black delegates sitting side by side. Baritone Paul Robeson spoke and performed. Eleanor Roosevelt presented the Conference’s Thomas Jefferson award for promoting the Jeffersonian ideals of human and social welfare to Mary McLeod Bethune, educator and civil rights leader. Bethune was a close friend of Eleanor Roosevelt and a member of Franklin D. Roosevelt’s “Black Cabinet,” a black advisory board. Bethune even rode with the First Lady to the conference from the airport. In her acceptance speech Bethune remarked on the fights abroad and on the home front: “As the Negro people march into battle they know that there are many hindrances to full participation in the country’s battle for freedom; but march they must, and march they will, because they do understand that every hope they have for full democracy hinges upon the outcome of the war.”

The SCHW would become one of the first inter-racial groups to call for an end to segragation. Although they disbanded in 1948 due to leadership issues and the rise of anti-Communist sentiment, their contribution to the beginnings of the Civil Rights Movement was significant.