Angels of Bataan and Corregidor

Seventy-seven women of the United States Army & Navy Nurse Corps were among the tens of thousands of prisoners taken when the Philippines were surrendered in spring 1942. Not only were they were the first large group of American women to face combat conditions, but they were also the first to be taken prisoners of war. The interned nurses continued to tend to the sick and wounded within the Santo Tomas and Los Baños prison camps.

When the Japanese attacked the Philippines in December 1941, the nurses were stationed in hospitals in and around the capital city of Manila. Eleven Navy nurses were captured there in early January 1942, when Manila fell. The Army nurses, however, had relocated southward to Bataan to tend to wounded soldiers just behind the fields of battle. Conditions were deplorable; supplies were dwindling and the makeshift hospitals were outdoors, increasing the already rampant spread of diseases like dengue fever and malaria.

Gen. “Skinny” Wainwright had instructed the nurses to pack up and move to Corregidor before General King surrendered Bataan on 9 April 1942. There, the open-air hospitals of Bataan were replaced by the dark, dank, and cramped Malinta Tunnel of Corregidor. A thousand hospital beds were set up in the underground bomb shelter and supply storehouse built by the US Army Corps of Engineers the decade before. For the most part, the nurses were ordered to remain inside the tunnel for their own safety, as the Japanese were bombing the area. 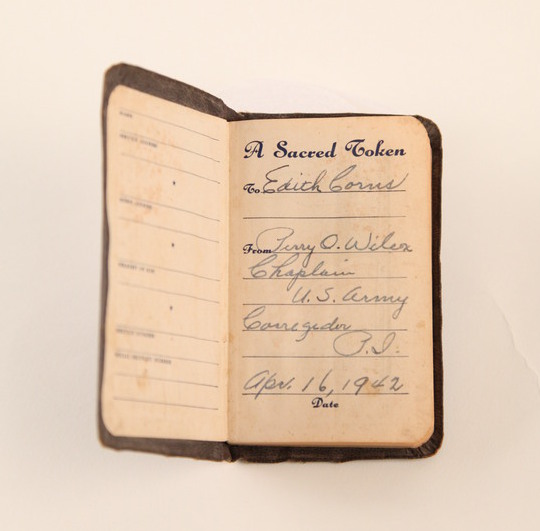 This New Testament was given to US Army nurse 2nd Lt. Edith Corns by Army Chaplain Perry O. Wilcox on 16 April 1942, while both were stationed on Corregidor. Shortly thereafter, the island was surrendered. Corns spent the remainder of the war in the Santo Tomas prison camp until it was liberated by an intrepid raid in February 1945 during the Battle of Manila. She was able to hold onto the New Testament for comfort throughout her imprisonment. Gift of Mike Noonan, 2001.346.001

When Corregidor finally fell nearly a month after Bataan, the Army nurses were taken prisoner along with the soldiers. They were sent to Santo Tomas prison camp in July, joining the Navy nurses who had already been interned there for six months. A year later the Navy nurses, led by Lt. Laura Cobb, volunteered for transfer to Los Baños, where they continued to work as a nursing unit treating civilian internees under impossible circumstances. They were liberated by the famous Los Baños Raid on 23 February 1945, after more than three years of harsh imprisonment.

The Army nurses, however,  remained at Santo Tomas for the remainder of the war, mirroring the actions of the Navy nurses. Under the guidance of veteran nurse Capt. Maude Davison, the women at Santo Tomas were expected to complete shifts, and when doing so, wear the khaki uniforms they had made for themselves rather than the men’s coveralls they had gotten accustomed to in Bataan. The importance to survival of maintaining one’s appearance and “normal” activities inside internment camps is a known phenomenon. Knowingly or not, Davison gave the nurses under her command a purpose for which to fight to survive. The Army nurses were liberated on 3 February 1945. 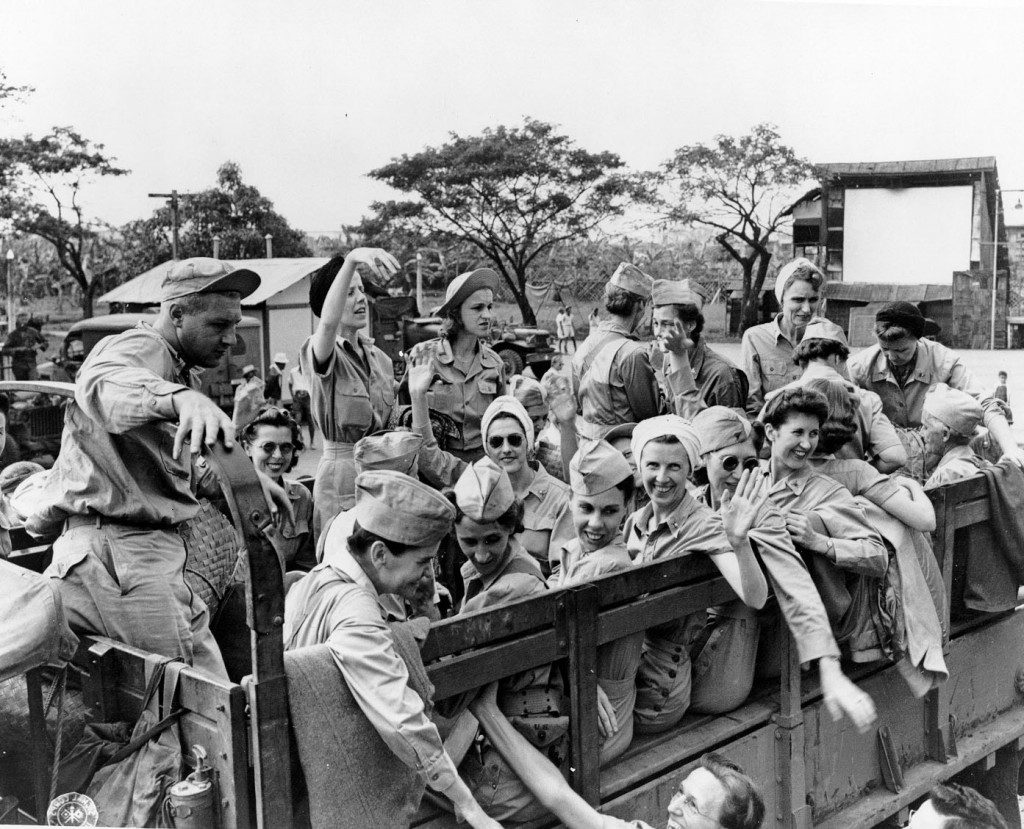 Army nurses are all smiles upon their release from Santo Tomas, February 1945

One Response to “Angels of Bataan and Corregidor”

These are stories people NEED to hear!!! The selfless acts of these nurses and their care for not only themselves but the care given to the other prisoners are acts of heroism that made it possible of the Allies to win the war!!!!

Leave a Reply to Alan Greig