This week we installed a new small exhibit, Canteen Canvases, outside of the Forbes Theater in the main Museum.  The display which will be up through January 2, 2012, features eight handcrafted pieces of canteen and mess kit trench art, including one crafted by Museum volunteer and 5th Air Force veteran, Vernon Main. For the installation, our Exhibit Designer, John Costa, decided to use mirrored Plexiglas for the floors and backs of his custom built cases. The mirrors enable us to spotlight these pieces, which are covered on all sides with etchings, from multiple angles. The mirrored effect is great—but boy, is it a difficult surface to keep clean! 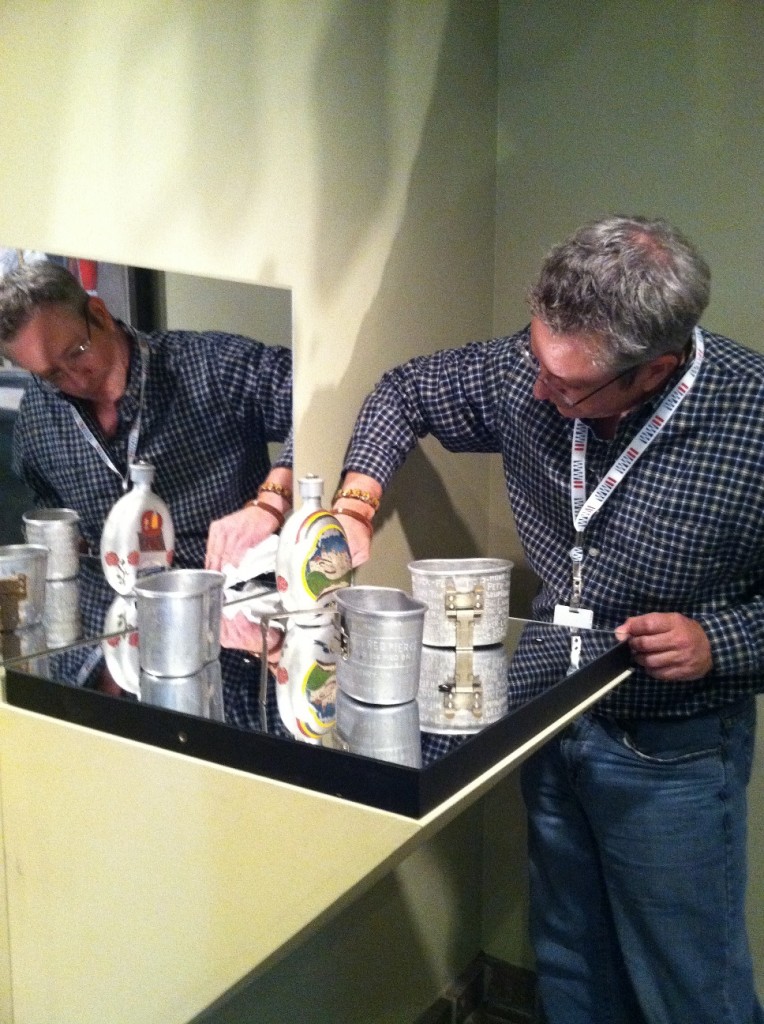 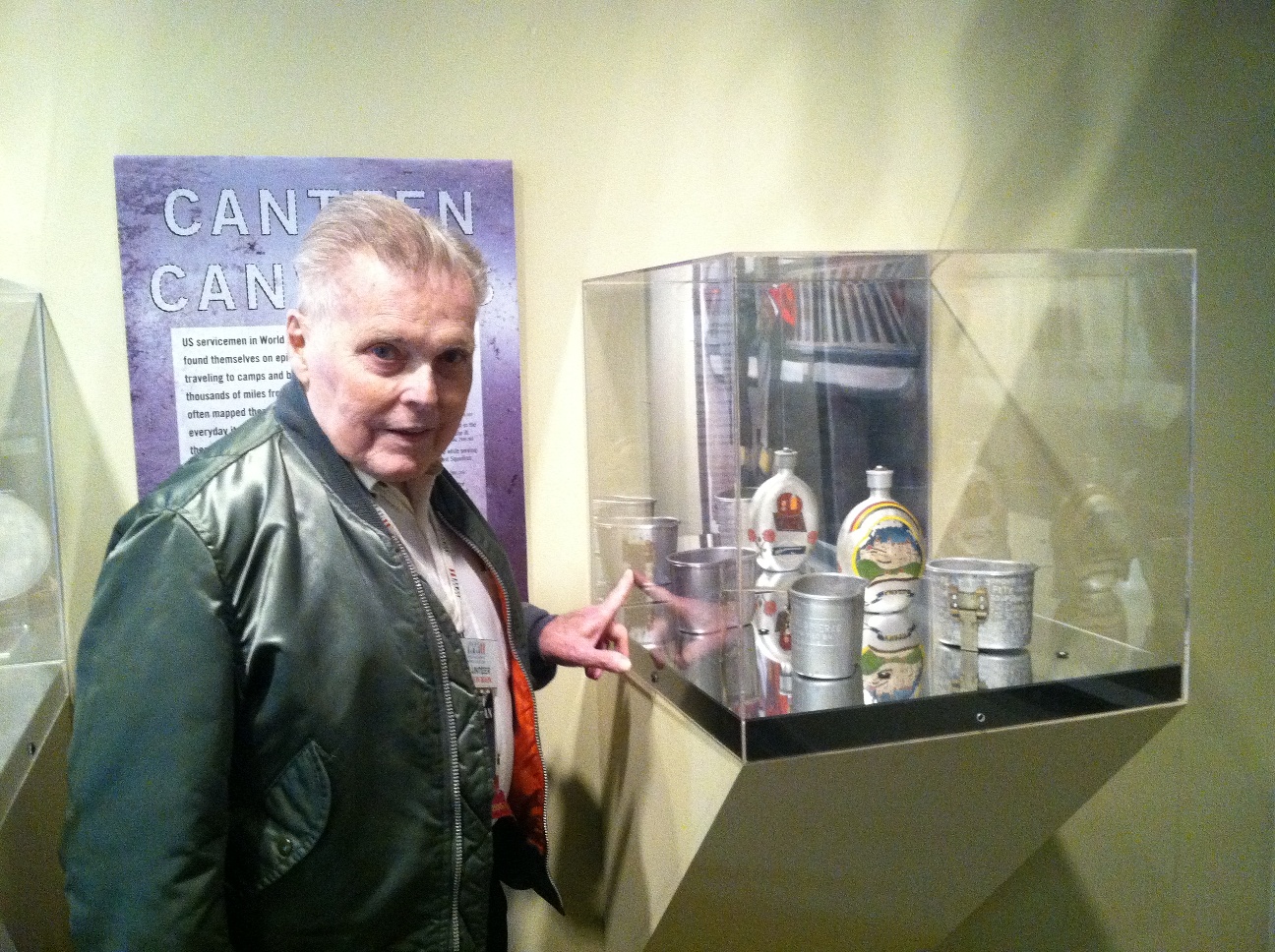 Veteran and Museum volunteer Vernon Main next to his decorated canteen. 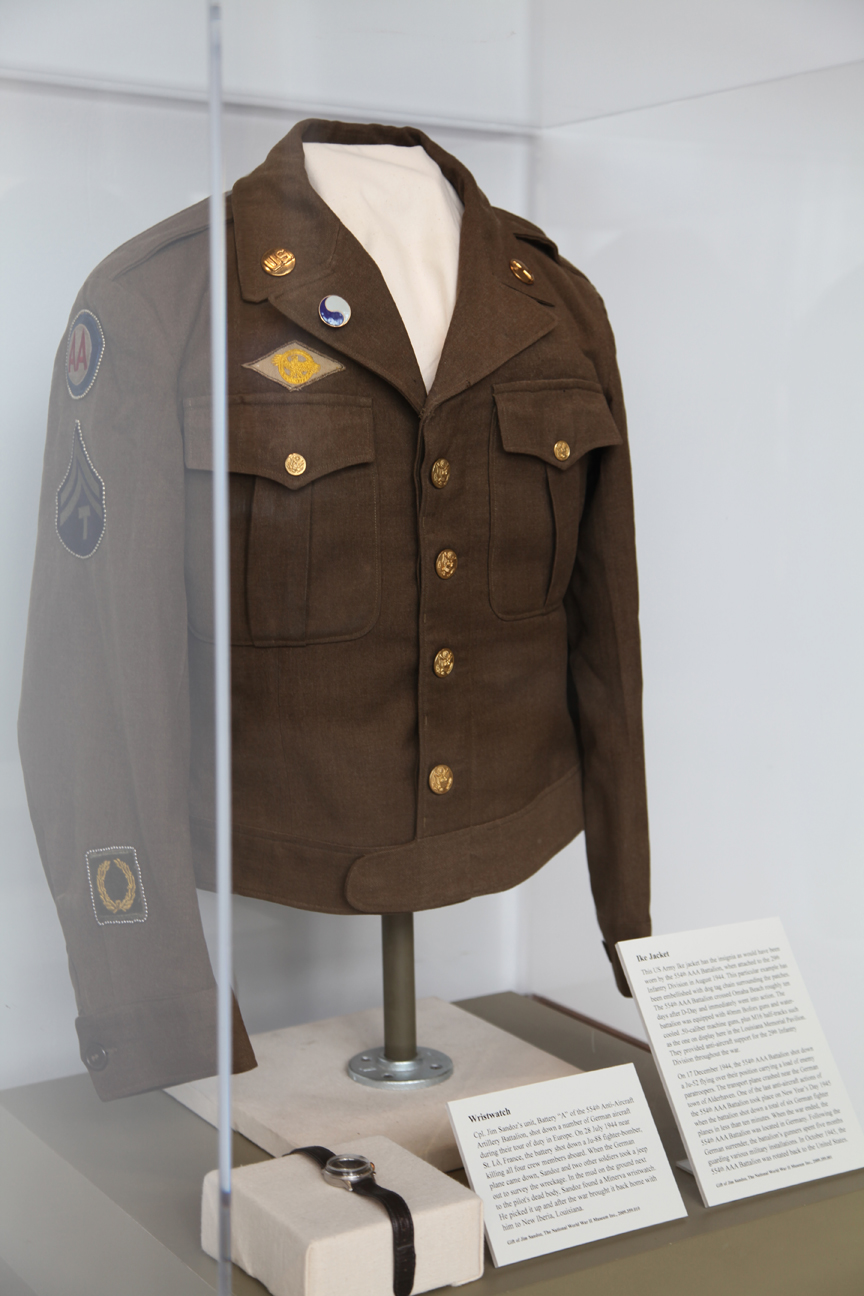 Cpl. Jim Sandoz’s unit, Battery “A” of the 554th Anti-Aircraft Artillery Battalion, shot down a number of German aircraft during their tour of duty in Europe. On 28 July 1944 near St. Lô, France, the battery shot down a Ju-88 fighter-bomber, killing all four crew members aboard.  When the German plane came down, Sandoz and two other soldiers took a jeep out to

survey the wreckage.  In the mud on the ground next to the pilot’s dead body, Sandoz found a Minerva wristwatch. He picked it up and after the war brought it back home with him to New Iberia, Louisiana.

This US Army Ike jacket has the insignia as would have been worn by the 554th AAA Battalion, when attached to the 29th Infantry Division in August 1944. This particular example has been embellished with dog tag chain surrounding the patches. The 554th AAA Battalion crossed Omaha Beach roughly ten days after D-Day and immediately went into action. The battalion was equipped with 40mm Bofors guns and water-cooled .50-caliber machine guns, plus M16 half-tracks such as the one on display here in the Louisiana Memorial Pavilion. They provided anti-aircraft support for the 29th Infantry Division throughout the war. 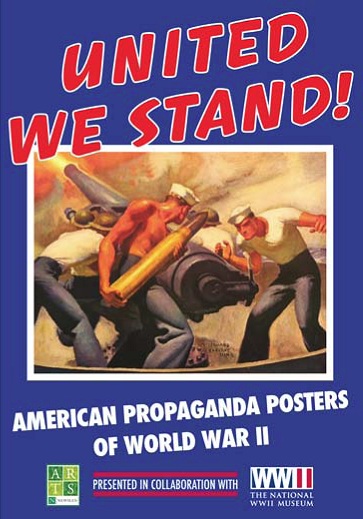 This exhibit at Isidore Newman School’s Reynolds Ryan Art Gallery features 39 of the Museum’s propaganda posters and will be used as an interdisciplinary teaching tool for students of the school. It is our hope that other schools in the area will be interested in this unique model to help students appreciate the lessons and values of World War II from a different perspective.

About the Reynold Ryan Art Gallery at Isidore Newman School

All exhibits are free and open to the public between 10:00 am and 4:00 pm, Monday through Friday. The gallery is closed on weekends and on school holidays. To schedule a gallery tour for students, contact Gallery Director, Kathryn Scurlock at KathrynScurlock@newmanschool.org, or 504-450-3111.

One Response to “New Artifacts on Display”

I am a retired museum professional and just visited the WW II Museum for the first time today. The permanent exhibits are the best I have seen in many years and I would very much like to know who the designer or designers responsible for them were.

Chef John Besh signs My Family Table December 7 – 1941, A Date That Will Live in Infamy