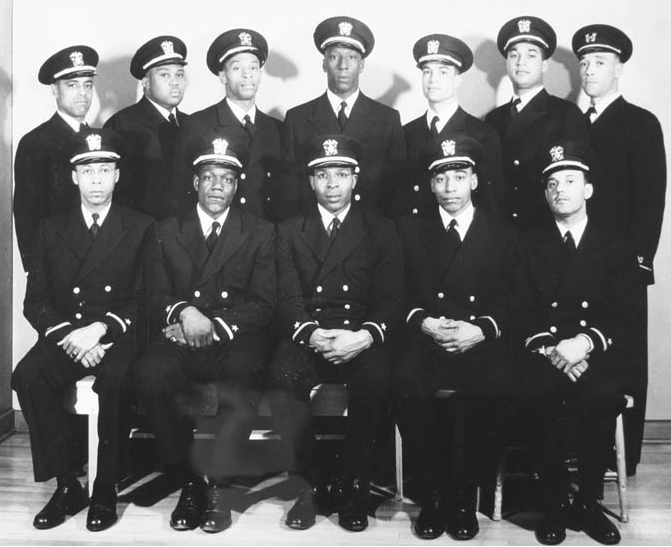 Group of recently appointed African American officers. Eleven of these men were appointed to the temporary rank of Ensign D-V(S), and one to Warrant Officer, USNR. February 1944.

February is an important month in remembering the path to freedom and equality for African Americans. While the world was in turmoil with war in the 1940s, significant progress was made in the passage for equal rights for African Americans from the Home Front to the battlefields that further set the path towards the 1950s and 60s Civil Rights Movement.  It was the fight for Double Victory, the battle for freedom against the Axis powers abroad and for equality at home, that inspired African Americans to achieve excellence and persevere during their participation in the war effort.  Join us throughout the month of February both here at the Museum and online in revisiting the African American experience during World War II and celebrating the lives that still sacrificed and defended a country that often fought against them.

In honor of Black History Month, join Assistant Director of Education for Curriculum Gemma Birnbaum to learn more about the men and women on the Home Front who worked to industrialize the war abroad while fighting against racism at home. While unprecedented numbers of African American men and women found careers in war production, inequalities in opportunities, pay, and career mobility plagued the Arsenal of Democracy. See how ordinary workers in extraordinary circumstances became leaders in the fight for civil rights.

Join us for a special presentation as Dr. John Morrow of the University of Georgia discusses how the experiences of WWI influenced both government policies and African American military service in WWII. Dr. Morrow will also discuss the long-lasting effects of African American service in WWII and what it means for our nation and its military today.
RSVP Now

Uncover Oral Histories and Photographs in our Digital Collections:

Explore African American High School experiences in our collection of High School Yearbooks from the WWII-Era: 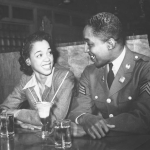 Sgt. Franklin William, home on leave from army duty, with his best girl Ellen Hardin, splitting a soda. May 1942. 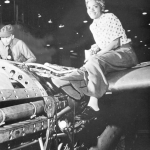 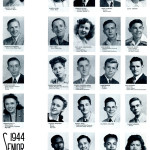 The integrated senior class of Topeka High School in 1944. 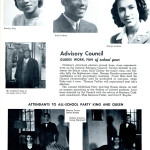 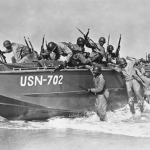 Members of Naval construction Battalions, are trained in landing tactics as well as general military drill. 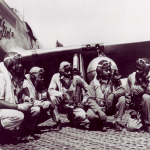 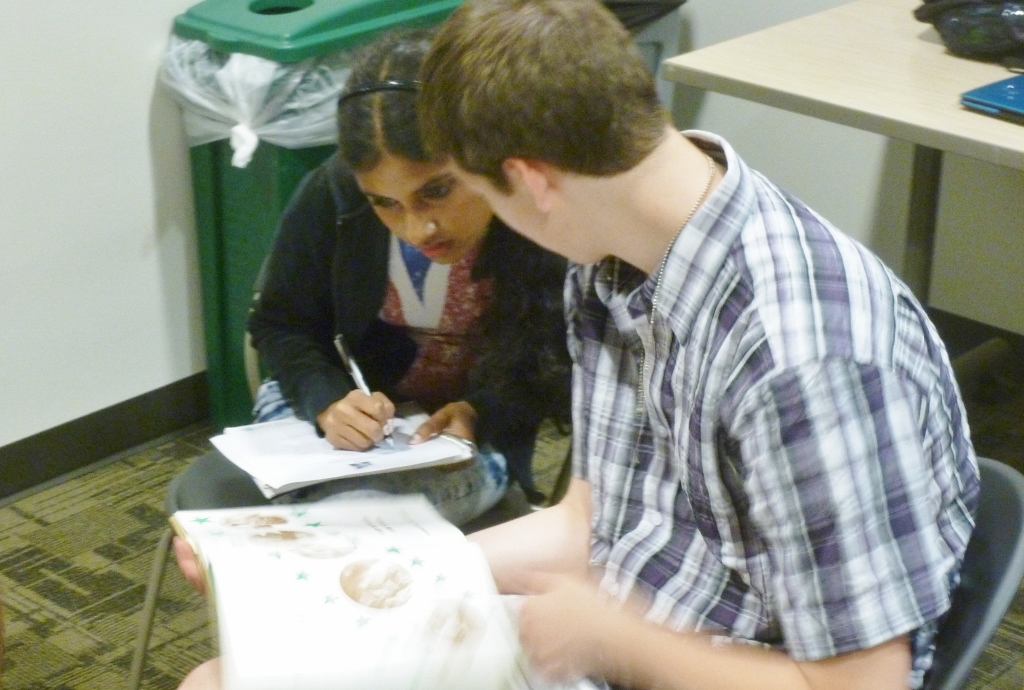 “Something that was very different was that they had typewriter classes” said Richard Otis of Bradford, Vermont after examining the 1944 yearbook from Carl Schurz High School in Chicago, Illlinois. The afternoon session for Wednesday, June 20 allowed the Normandy Scholars to study wartime high school yearbooks to help give the students a sense of the Home Front. Richard joked that the typewriter classes belonged in the Stone Age, but he also noted the overt patriotism throughout the book. The first page was dedicated to all the graduates of Schurz High School who served.

Patriotism was a hallmark of all the yearbooks. Lacy Myrman of Brooklyn Park, Minnesota observed that every page of the 1945 Kankakee High School (Illinois) yearbook had a quote from a military or political leader such as Winston Churchill, Dwight D. Eisenhower, and Chester Nimitz. Every yearbook had a section honoring alumni who had served or were serving. Timelines of World War II events appeared several of the yearbooks.

Other students noticed societal differences in the nearly 70-year-old yearbooks. Tiffany Shumack of San Diego noticed the segregation within a school in Topeka, Kansas. Both white and black students attended the school, but many of the clubs and the school’s prom were segregated. Schools in urban areas such as Milwaukee, Chicago, and Oklahoma City showed almost no diversity among the student body, a very different setting from the schools that the Normandy Scholars attend today.

During the morning sessions, the students continued to experience lectures from renowned scholars. Up first was Dr. Sarandis “Randy” Papadopoulos, Secretariat Historian at the Department of the Navy. His lecture, Planning and Preparing for Operations Neptune and Overlord detailed the immense planning that went into these operations. The students were in awe at the sheer numbers of men, vehicles, and supplies that had to be put ashore in 24 hours.

Next up was Dr. Ray Batvinis of George Washington University with a very popular lecture called The Secret War: Intelligence and Deception in the Normandy Campaign. Dr. Batvinis served as an FBI agent and teaches classes on the history of the FBI. His knowledge of intelligence operations gave his lecture an extra layer of credibility. The students listened intently to the story of Juan Pujol Garcia, codenamed GARBO by the British. Garcia created a false identity and gained the trust of Hitler while convincing the Germans that the Allied invasion would come at Calais, where the English Channel was narrowest. Garcia was so trusted by the Germans that he received an Iron Cross for his work along with honors he received from Great Britain

On Thursday, the fifteen Normandy Scholars and their teachers will board a plane for Paris, France where a bus to the town of Bayeux will be waiting. On Saturday morning, the group will visit Pegasus Bridge and the Museum of the Atlantic Wall. 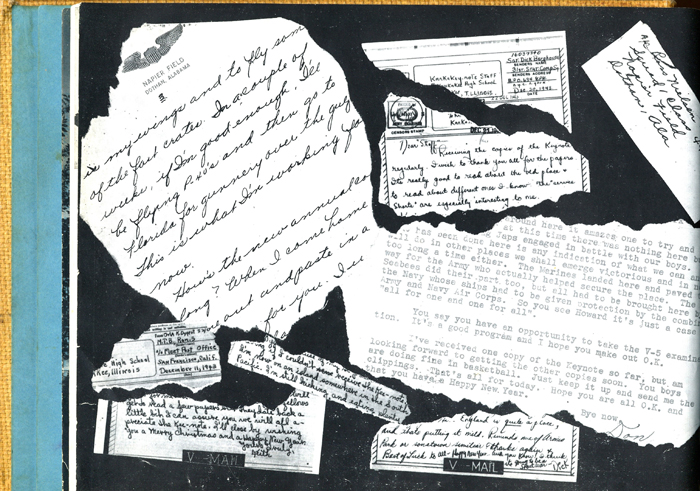 A few months ago, we asked our readers to donate their WWII-era yearbooks to the Education Department. You delivered! Yearbooks are a great way to find out how the everyday lives of high schools students were impacted by World War II. Full of messages of hope to one another, tributes to classmates who were serving overseas, and images of war bond sales and scrapping drives, yearbooks provide a fascinating look at the culture of America at war. World War II infiltrated nearly every aspect of the high school experience; with the draft an accepted part of life, many of your male classmates would have been off to war almost immediately upon graduating. Alumni who had perished in the line of fire were often featured prominently. 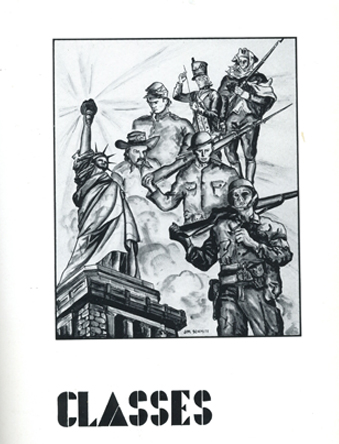 The war infiltrated every aspect of American life. Many images featured soldiers, nurses and other war-time symbols.

We’ve put together a gallery of selected images that represent what life was like for high school students on America’s Home Front during the war. Feel free to share your thoughts and your own high school war-time memories in the comments!

Check out the full gallery, “Take a Closer Look at Yearbooks,” here!

Send Us Your Wartime Yearbooks! 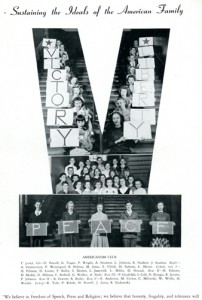 Wartime high school yearbooks are choke full of great images, stories, and memories of what it was like to be a teenager during WWII.  And that’s why the Education Department wants to collect as many as it can.  We’re creating new lessons and programs that explore WWII from a teenager’s viewpoint.  Wartime yearbooks are a great primary source for students to start that exploration. 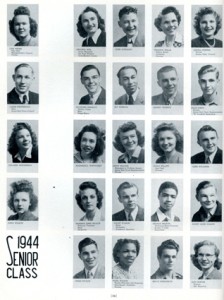 Do you have a wartime high school yearbook that you would like to donate to the Education Department?  You need to know that it will become part of a hands-on education program, not accessioned into the Museum’s permanent collection.  But it will be seen, analyzed, laughed at, wondered at, and ultimately respected by today’s generation seeking meaningful connections between their world and the Greatest Generation.

If you have a yearbook to donate, please contact Director of Education Kenneth Hoffman at educator@nationalww2museum.org.