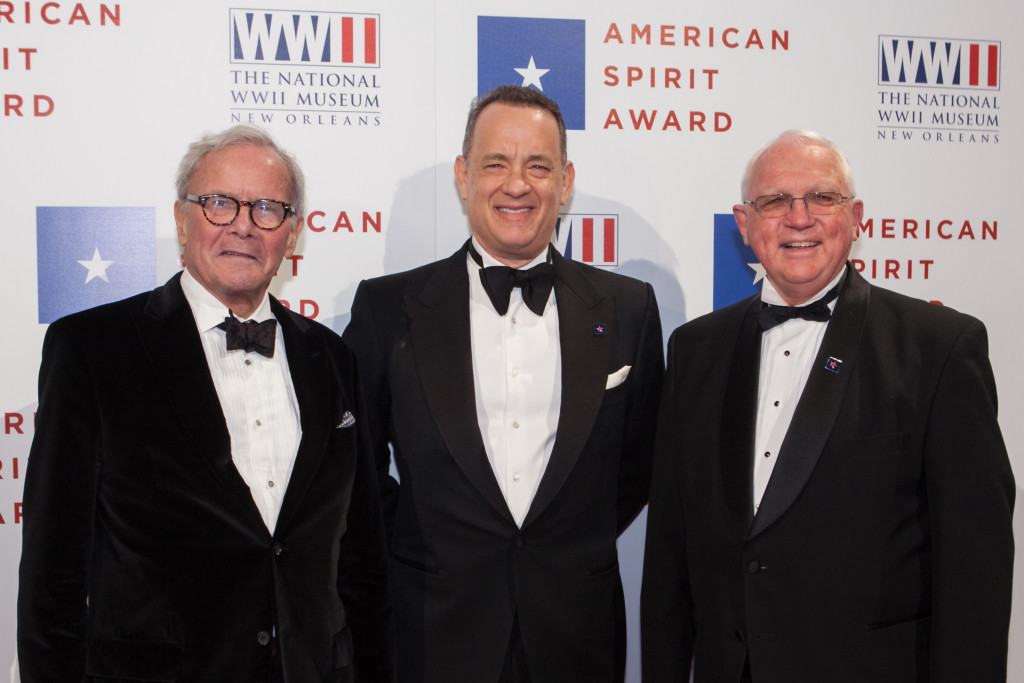 When The National WWII Museum first opened its doors on June 6, 2000, as The National D-Day Museum, legendary broadcaster Tom Brokaw and award-winning actor Tom Hanks were already among the ranks of its supporters. It was a natural fit for two men who have done so much to honor the personal stories of World War II, and the beginning of an enduring friendship with the Museum. Both Brokaw and Hanks have worked tirelessly throughout their careers to document the World War II story, educating millions of Americans about our shared history and strengthening the legacy of the greatest generation. During a private awards banquet, held at Cipriani Wall Street in New York on Tuesday, February 24, 2015, The National WWII Museum applauded their remarkable careers with the presentation of its American Spirit Award, an honor recognizing individuals who demonstrate extraordinary dedication to the principles that strengthen America’s freedom and democracy.

The American Spirit Award is given to those who make unselfish contributions to their community, state or nation; lead by example; exhibit the highest standards of integrity, discipline and initiative; and exemplify core values that were critical to the Allied war effort – teamwork, optimism, loyalty, courage and sacrifice.

“In addition to being leaders in their fields, Tom Brokaw and Tom Hanks have served as dedicated public historians, using their respective platforms to bring the stories of World War II to new generations,” said Museum President and CEO Gordon “Nick” Mueller, PhD. “They have also been integral to the growth of this Museum and fulfillment of our educational mission.” 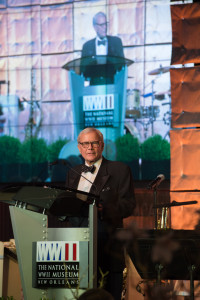 Brokaw at The National WWII Museum’s Road to Berlin Opening Gala in December 2014.

Well known from his career in broadcast journalism, in 1998 Tom Brokaw became a best-selling author with the publication of “The Greatest Generation.” Inspired by the mountain of mail he received from his first book, Brokaw published “The Greatest Generation Speaks” in 1999. Brokaw was the only network evening news anchor to report from Normandy, France, during the D-Day 60th Anniversary ceremonies in June 2004. He returned to Normandy for the 70th anniversary in June 2014, leading a Museum delegation to the ceremonies and events and reporting on behalf of NBC. Brokaw has been in attendance at nearly every major building opening at The National WWII Museum since 2000 and has been a champion for the Museum in the media and in the fundraising arena.

Tom Hanks has lent his tremendous acting, directing, producing, and voice talents to an array of WWII-focused projects over the last two decades. He earned his fourth Academy Award nomination for Best Actor for “Saving Private Ryan,” garnered praise and awards for the miniseries “Band of Brothers,” helped narrate the Ken Burns documentary “The War,” and reunited with Steven Spielberg for the HBO miniseries “The Pacific.” Hanks also offered an iconic performance in the Home Front-focused “A League of Their Own.” In 2009, The National WWII Museum debuted the exclusive 4D film “Beyond All Boundaries,” with Hanks serving as executive producer and narrator. Offscreen, he played an active role in the creation of The National WWII Memorial and, as a champion for The National WWII Museum, has been instrumental in achieving its goal to become the preeminent museum on World War II.

“Without the efforts of these two men,” said Mueller, “this Museum might not have happened. Their contributions have been that important to our institution.” 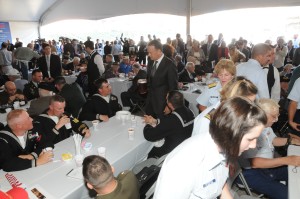 Hanks serving food to the troops at The National WWII Museum’s Solomon Victory Theater opening in 2009.

“From the beginning I was inspired by the determination of the late Stephen Ambrose and Nick Mueller to erect a permanent tribute to honor the men and women I wrote about in “The Greatest Generation,” said Brokaw. “The dreams and determination of these two historians have given that generation and the world an enduring reminder of the military genius, personal sacrifice and political will required to win the greatest war in the history of mankind. It’s an honor to have played a small part in their magnificent effort.”

During the ceremony in New York, NBC’s Lester Holt emceed the event as a taste of New Orleans was brought to the stage with entertainment by Jazz at Lincoln Center Orchestra with Wynton Marsalis. Throughout the evening, proceeds were raised to benefit the Museum’s Brokaw-Hanks Fund for Digital Access. This fund supports digitization of The National WWII Museum’s vast and growing collection of artifacts, archival materials, images and oral histories – providing invaluable access to these resources for teachers, students and others interested in the study of World War II.

Strengthening online access broadens the Museum’s reach to individuals who may never visit the campus while honoring the distinctive contributions of Tom Brokaw and Tom Hanks to the Museum and to America’s memory of World War II – both in words and film. The Museum’s growing digital archive can be seen at ww2online.org.