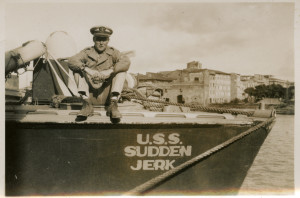 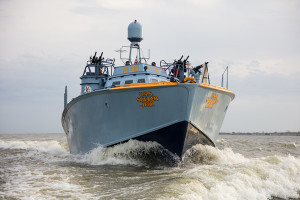 Patrol-torpedo boats were only given a numerical hull designation, unlike their larger counterparts. Crews were allowed to give their boats a nickname, and often got creative. Nicknames for some of PT-305’s squadron mates were USS Cherry (PT-304), La-Dee-Da (PT-308), Oh Frankie (PT-309), and Sea-wolf (PT-313). PT-305 was given two confirmed nicknames during the war, the first coming from a crew mishap, as told by Baker First Class Benedict Bronder, from Minnesota. Bronder came aboard PT-305 with the first crew in 1943.

“The one we had was Sudden Jerk,” he said. “And the way they got that (was) they were backing in to park it and they sped up a little bit too much and when it come back, it hit where it was tied up. And they said ‘That was a sudden jerk!’ and then they said, ‘That’s a good name!’ It didn’t ruin anything on the boat, but that’s where it got the name Sudden Jerk.” She carried that name throughout 1944 and into 1945, when a new crew renamed her. Stay tuned for the story of the Half Hitch!

Service-era photo: Lieutenant William Borsdorff, from New York, served as the first commanding officer aboard PT-305 from November 1943 until June 1944. He then took a squadron command position and directed patrols. He is shown here in late 1944, aboard the USS Sudden Jerk in Leghorn, Italy. Photo gift of Mitch Cirlot 2014.445.086.