Born in Lancashire, England, he was the third son of a cotton manufacturer. He entered University of Manchester and got his degree in physics in 1930, and a masters in x-ray crystallography in 1931.

Hey taught physics at schools in Northern England until 1942, when he joined the Army Operational Research Group. We was assigned to work on radar jamming. At that point the Allies were using a form of radar with relatively long waves. Axis forces could not only detect this radar, but jam it. Using radar jamming two German warships had recently escaped through the English Channel. At the same time the Allies were losing an unsustainable tonnage of cargo to U-Boats in the Atlantic.

75 years ago this month Hey was monitoring radar jamming when he noticed a great deal of noise in the 4-8 m jamming Allied radar sets. Following the source, he noticed that it moved slowly, tracking the sun. Looking up meteorological data, he discovered that the Sun had a very active solar spot that day. Solar spots had been hypothesized to produce streams of ions and magnetic fields. Hey interpreted the phenomenon of the radar jamming as support of this hypothesis.

Development of radar using much shorter waves generated by the cavity magnetron allowed the Allies to avoid jamming by the Axis powers. Using this microwave radar Hey was tracking V2 rockets heading towards London in 1945 when he noticed transient radar echoes at about 60 miles of altitude. The echoes arrived at a rate of 5-10 per hour and persisted after the V2s were gone. It turned out the echoes were the vapor trails of meteors, and Hey showed that meteors could be tracked this way in the day when they were not visible to the eye.

JS Hey was not able to publish his results until after the war, for security reasons. Shortly after the war he was appointed to head the Army Operational Research Group, and he worked at the Royal Radar Establishment, where he continued his work in radio astronomy. 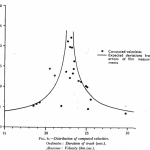 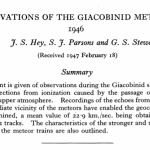 The National WWII Museum Social Media Guidelines February Classroom of the Month— Get in the Scrap!