Today, TV screens are everywhere. There are several in most American homes, most restaurants and bars have them, they dominate the electronics sections of stores.

During WWII, radio filled that niche in electronics and mass communication. During national elections and other big events or disasters today, we gather around televisions to find out what is happening. During World War II, families gathered around radios. They had their days to hear their favorite programs, as I remember Sunday nights watching nature programs on TV with my family.

The technology underlying the radio and the television are basically the same. Manipulation of an electromagnetic field creates waves in a part of the electromagnetic spectrum at the transmitter. At some distance these waves are turned into an electrical current again by a receiver. In radios the receiver’s current makes a magnet attached to a paper or fabric cone move and generate sound waves. In the original televisions, the current was used in a cathode-ray tube (CRT) to make patterns on a phosphorescent screen. Today’s televisions put a current through a matrix of materials that responds to current by making different colors.

The original radio waves transmitted by Marconi in the 1890s could only travel a couple of miles. Since then, engineers have developed ways to make all sorts of different electromagnetic waves. These made radio better, but also made RADAR possible, and microwaves, and x-ray machines (the first x-rays were made with radioactive material but now they use electronically generated energy).

We are constantly in fields of anthropogenic electromagnetic waves. They come unintentionally from the electricity in the buildings we live in. The come intentionally from all sorts of devices. The many remote controls in a home, the cell phones, wireless phones, Wi-Fi routers, Bluetooth devices—all of these use electromagnetic waves to communicate at a distance. (As an aside, land-line phones and cable signals come into your home as electrical currents, but satellite services uses waves).

Much of the consumer technology of the last century has been about finding better and better ways to harness electromagnetic waves. Amplitude modulation (AM) of waves was replaced by Frequency Modulation (FM)—although AM is still used and has its uses. Broadcasters have recently been adding HD signals, which can contain more information in waves. That’s why multiple broadcast “stations” can be received at a single frequency of waves.

World War II was a huge time for the expansion of this engineering. Necessity then for portable radios drove miniaturization and vacuum-tube technology. RADAR development created shorter wavelength generation. Cleaning up radio reception led to the discovery of cosmic background radiation and also led to radio astronomy.

Compared to 75 years ago, the technology we use today to communicate and entertain may seem completely different. But in essence it is still the manipulation of electricity to make electromagnetic waves to be received at a distance.

You can find archived radio news broadcasts from WWII here. 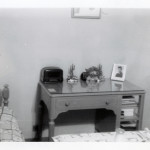 This bedside table holds a small radio next to a picture of a soldier. From the collections of the NWWII Museum. 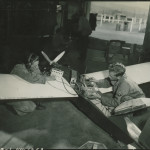 Radio-controlled drones were used for target practice during WWII. From the collections of the NWWII Museum. 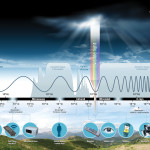 The EM Spectrum and how it is used in communications. From NASA