During WWII the Navy used a foam to put out fires of oil and gasoline. This foam was called Aer-O-Foam, and is still made today by Kidde Fire Fighting. The foam is made from soy protein and water, mixed and then aerated in a nozzle. The foam smothers the fire, coating the oil and preventing oxygen from getting to it. Seamen called the mixture ‘bean soup,’ since it was made from soybeans.

National Foam System (today owned by Kidde) got a sample of the soy protein from the Glidden Company in 1941. Glidden employed an organic chemist named Percy Julian, who had devised a way to separate soy protein from soybean meal. Glidden hired Julian in 1936 because of his resume, and because he was fluent in German, having done his dissertation work in Austria. Glidden had just purchased a modern solvent extraction plant from Germany, and needed someone to supervise the extraction of oil from soybeans, and the production of coatings, solvents, and glues from soy products.

Percy Julian was very happy to have the job, having been refused work at DuPont (because when he arrived they realized he was black), and at the Institute of Paper Chemistry (because the town where it was located didn’t allow black residents). Although frustrating, this discrimination was not surprising for Julian, who was well acquainted with Jim Crow. He grew up in Montgomery, Alabama, and went to college at DePauw University, where he was not allowed to room on campus, and had trouble finding a place that would serve him food. He attended Harvard on a fellowship for graduate studies, but left with only a masters degree, because they withdrew his teaching assistantship. They were concerned their undergraduates would not like being taught by an African American.

Julian took up teaching at Howard University, and left when he received a Rockefeller fellowship to finish his graduate studies at the University of Vienna. Ironically, given the rising fascism in Europe, he found freedom from racial prejudices there, like many black artists and intellectuals of the era. After receiving his PhD in 1931 he returned to Howard.

There he got caught up in personal and political controversies, and was forced to resign his position. A former professor at DePauw offered Julian a temporary position in the chemistry department. While at DePauw he worked to synthesize stigmasterol from a west African bean, the calabar. Stigmasterol, extracted from soybean until then, was an important and expensive precursor to steroid hormones. Julian’s discovery of a method for creating stigmasterol from inexpensive raw products was thus a boon to pharmaceutical research. Despite this accomplishment, Percy Julian was denied a professorship at DePauw because he was black. Thus he ended up working in industry at Glidden.

At Glidden, Percy Julian developed many products for paper coatings and glues and paints. During the war some of these were used to coat airplanes and paint ships and boats. Later he was able to produce soy sterols to be used in producing sex hormones. Some of the products he produced were so valuable that they were shipped to manufacturers in armored cars.

When Glidden gave up pharmaceutical work in 1953, Julian left the company and started his own. At the time he was being paid $50,000 a year (about $440,000 in today’s dollars). Percy Julian’s later life was a mixture of success and obstacles. His company was fairly successful, and he was elected to the National Academy of Sciences (in 1973, on the second African American in the Academy). On the other hand, he faced continued discrimination. For example, in 1950, when he moved his family into a ‘nice’ neighborhood in Oak Park, a suburb of Chicago, someone fire-bombed the house on Thanksgiving Day. Later that year someone tossed dynamite into their house.

There is a fine documentary about Percy Julian, produced by PBS’ Nova. Named ‘Forgotten Genius,’ it first aired in 2007.

All images from PBS media 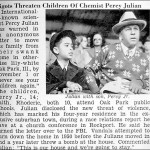 After they moved in, terrorists threw a dynamite bomb at the house. 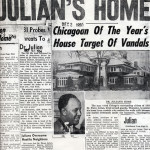 Before his family moved in, a gasoline bomb was used by terrorists to damage his home in Oak Park. 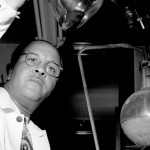 Home Front Friday: The Gifts That Keep On Giving “Am Safe, A Prisoner of War in Germany…”