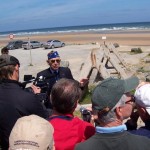 Dr. Harold Baumgarten speaks to a Museum tour group at Normandy, France, in 2006. 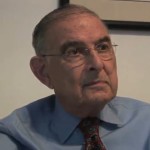 A photo from Dr. Harold Baumgarten's oral history for The National WWII Museum. 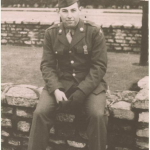 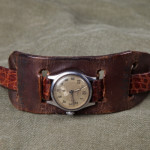 The wristwatch Private Harold Baumgarten wore ashore at Omaha Beach on D-Day. From the Collection of The National WWII Museum. 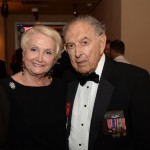 Dr. Harold Baumgarten with his wife, Rita, at the 2015 Victory Ball. 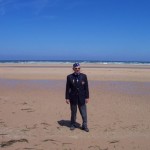 Dr. Harold Baumgarten at Omaha Beach with a Museum tour in 2006.

Private Harold “Hal” Baumgarten, Company B, 116th Regiment, 29th Infantry Division, landed on Omaha Beach on D-Day, June 6th, 1944. Part of the first waves of the assault force, Baumgarten endured murderous enemy fire, was wounded five times in just 32 hours of fighting, and had to be evacuated by hospital ship.

The Museum’s Digital Collections contain a minute-by-minute personal account of his harrowing D-Day experience. Watch the oral history here—https://goo.gl/Yo8jaF—and join us in a heartfelt final salute to an American hero, retired physician, and dear friend of The National WWII Museum. Dr. Baumgarten died December 25, 2016, at age 91.

One of the Museum’s earliest and most enthusiastic supporters, Dr. Baumgarten was a featured speaker in The National D-Day Museum’s 2000 grand opening ceremonies. The wristwatch he wore ashore at Omaha, given to him by his father, has been on display at the Museum ever since.  In 2015 he received the Silver Service Medallion, awarded to veterans and those with a direct connection to World War II who have served our country with distinction, at the Museum’s Victory Ball. He was a frequent speaker at Museum events, including the International Conference on World War II, and returned to “Bloody Omaha” several times with Museum tours of the Normandy beaches.

Of the 30 men on Dr. Baumgarten’s landing craft on D-Day, 28 did not survive the invasion, a chilling fact cited by Museum president and CEO Gordon H. “Nick” Mueller, PhD, in remarks after receiving the French Medal of Honor in May 2016.

“Many years later, Harold would make a point of reciting the full name and hometown of fellow soldiers who didn’t come home,” Mueller said. “‘I want them never to be forgotten,’ he would say.”

According to Dr. Baumgarten’s obituary at Legacy.com, his WWII service—for which he received a Purple Heart and two bronze stars, among other honors—inspired him to devote his life to “paying back,” first by becoming a teacher, then a doctor.

His vow to honor the memories of the men who fell around him on D-Day was evident in scores of interviews, his own writing, countless speaking engagements around the world, and his dedication to the Museum.

Dr. Baumgarten credited Museum cofounder Stephen E. Ambrose with encouraging him to write and speak about his war experiences, and it was through the Ambrose connection that Dr. Baumgarten’s journey onto and across Omaha Beach reached its widest audience: at the D-Day Museum’s June 6, 2000 opening, Saving Private Ryan director Steven Spielberg told Dr. Baumgarten that the film’s unforgettable beach combat scenes were drawn from the recorded interviews Ambrose had done with the veteran.

“He is the real thing,” said Saving Private Ryan star Tom Hanks at the Museum’s opening.

We send our condolences to Dr. Baumgarten’s wife, Rita, who frequently accompanied him at Museum events and on tours, as well as all of his family and many friends.

“With us on the job…”: WAC Mary Margaret Owen The Ella Fitzgerald Charitable Foundation Brings “First Lady Of Song” to Museum