SciTech Tuesday: The Hurricane Season of 1944

At a time when we have been relatively free of tropical systems for a few years, it is interesting to look back at the historical pattern of hurricane activity. This year only Hermine, a relatively minor storm, and the ‘hurricane without wind’ that dumped 30 inches of rain in about 24 hours over parts of Louisiana, have reached the U.S. Gulf Coast. Hermine was the first hurricane to hit Florida in 10 years.

With all the major events that happened during WWII, it is easy to forget the regular hardships and crises that occurred. This includes tropical storm activity. In 1944 there was a very active tropical storm season in the Atlantic.

In 1943 there were 10 tropical storms in the Atlantic, 5 of which became hurricanes, and 2 of which were major hurricanes. There were 19 fatalities from these storms.

In 1944 there were 14 tropical storms in the Atlantic. Eight of those storms became hurricanes, and 3 were major hurricanes leading to 1,156 fatalities.

In 1945 there were 11 tropical storms in the Atlantic, 5 of which became hurricanes, and 2 of which were major hurricanes. There were 29 fatalities from these storms.

Hurricanes weren’t designated by names until 1953, so the storms of this era are named numerically, or referred to by names they got from press coverage. The two storms of the 1944 Atlantic tropical season that impacted U.S. territory were the Cuba-Florida hurricane and the Great Atlantic hurricane.

The Great Atlantic hurricane of 1944 started as a tropical storm near the Virgin Islands on September 9. As it moved west and north the system gained strength and reached peak strength as a Category 4 storm on September 13 near the Bahamas. It passed the Outer Banks, and then, weakening, made landfall on Long Island, NY and again on Rhode Island. At landfall it was a Category 2 storm. It ended when it merged with another extratropical system near Greenland on September 16. The lowest pressure recorded was 933 mbar, and the highest sustained winds were recorded at 145 mph. (Airplane reconnaissance of storms began in 1943. Regular radar tracking of storms began after WWII.) This storm sank the USS Warrington (a destroyer) 450 miles out from Vero Beach, leading to the death of 248 sailors. The hurricane was a category 4 producing 70 ft waves when the Warrington encountered it. The storm also sank 2 coastguard cutters, a minesweeper, and a lightship. The Jersey Shore was heavily damaged.

The 1944 Cuba-Florida hurricane developed off the coast of Nicaragua on October 12. The storm moved northward and strengthened, reaching Category 2 status as it approached Grand Cayman. It moved north again and still strengthened, reaching peak winds of 145 mph as it crossed Cuba. By October 19 the storm weakened and made landfall near Sarasota with a windspeed of 75 mph. It weakened more as it moved north and east across Florida, and then went out over the Atlantic near Jacksonville. When it reached Savannah, GA, it came ashore with winds near 50 mph, and moved over the eastern Carolinas, and then went to sea again near Norfolk. It traveled along the shoreline as it moved north and east, causing gale force winds off Newfoundland. The most deaths in this storm were in Cuba, where about 300 people died. The storm also destroyed much of the Florida citrus crop. 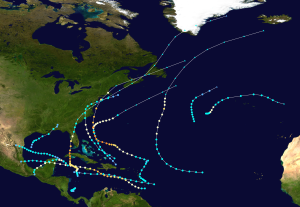 All the Atlantic tropical storms of 1944. From Wikimedia Commons