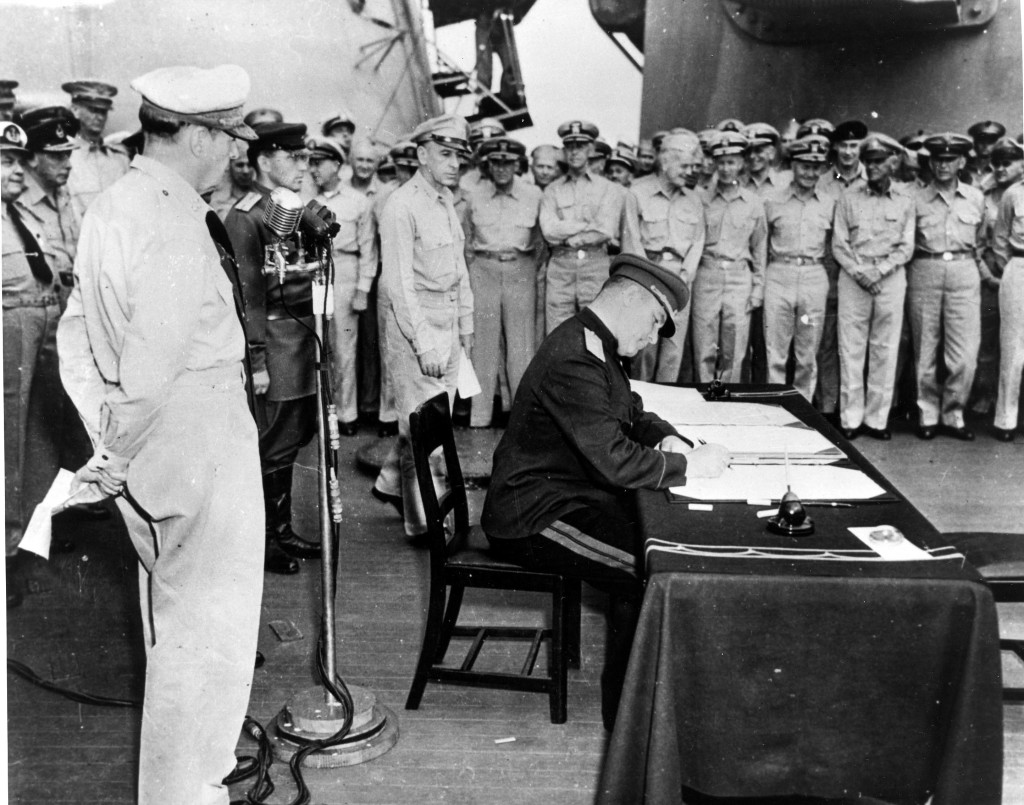 To commemorate Victory Over Japan Day 2016, Jay Mehta of Overland Park, Kansas, a 10th  grader at the Pembroke Hill School in Kansas City, Missouri, composed this guest blog detailing his experiences after traveling to The National WWII Museum in December 2015 and hearing the oral history of Lieutenant Commander James Starnes, who was officer of the deck aboard the USS Missouri on September 2, 1945, when the Japanese Instrument of Surrender was signed to officially bring WWII to a close. Jay later continued on his journey, traveling with family to Pearl Harbor, Hawaii, to visit “The Mighty Mo” herself.

“Beaches and Battleships,” by Jay Mehta

History shapes our lives. This saying often refers to the decisions and battles of times past that are still affecting the world today. However, over the course of the past year I have come to understand another facet of this saying: that understanding history not only informs our decisions, but also inspires us to experience new things.

Last summer, at the National History Day competition in College Park, Maryland, I was one of 51 students (representing the 50 states and the District of Columbia) to receive the Salute to Courage Award from The National WWII Museum in New Orleans. In December, we each represented our state at the opening of the Museum’s new Richard C. Adkerson & Freeport McMoRan Foundation Road to Tokyo: Pacific Theater Galleries. As a part of the award, each of us was privileged to study the life of one veteran or servicemember from our home state. When I received the name James Starnes and began watching his oral history, I was immediately befuddled. I represented the state of Missouri. James Starnes was born and raised in Decatur, Georgia. It was not until the end of his fascinating chronicle that I understood why a student from Missouri had been chosen to study him: James Starnes was the officer of the deck and navigator of the USS Missouri, the ship on which the Japanese formally surrendered to the Allied forces, thereby ending World War II. 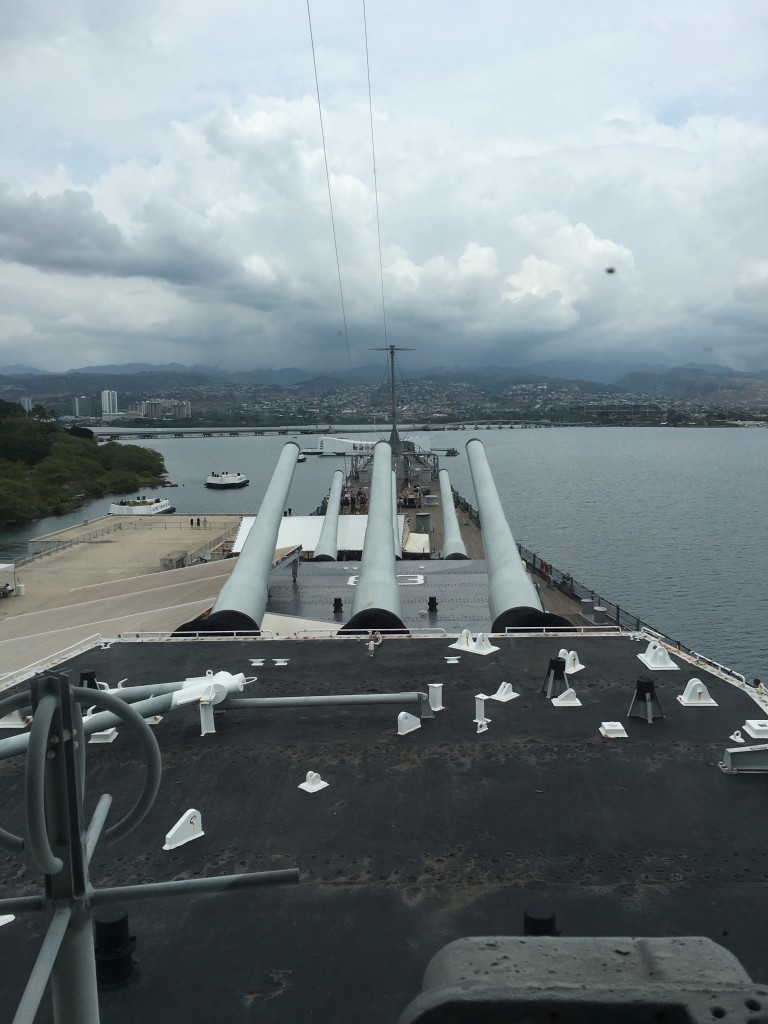 The research drew me in rapidly. I began to watch footage of the historic event to try to spot a young Starnes or some aspect of the scene he described in his oral history. I also emailed the archivist at the Harry S. Truman Presidential Library and Museum in Independence, Missouri, to see if the museum had any artifacts relating to the surrender, which happened during Missouri native Harry S. Truman’s presidency. Most interesting, however, were the facts I uncovered about the USS Missouri itself.

I began to wonder why the USS Missouri had been chosen for the surrender. This was soon answered when I discovered that it was Margaret Truman—the daughter of the then junior senator from Missouri—who had actually christened the battleship by smashing the ceremonial bottle of bubbly on its hull. According to Starnes, on that day Truman promised his daughter that “the ‘Mighty Mo’ will steam into Tokyo Harbor someday, with guns a-blazing, and the war will be over.” It made perfect sense, then, that four years later, when he was president and was choosing a location to mark the end of one of the bloodiest conflicts in history, he chose the ship named for his home state and christened by his only child.

I also began to listen to Mr. Starnes’s words more carefully. He mentioned that as officer of the deck his duty was to give the Japanese delegation the official permission to board the ship. He spoke of positioning eight men, each over six feet tall, at the Japanese entry point to project an aura of dominance.

He spoke of the infamous wartime incident aboard the Missouri when a young Japanese kamikaze pilot, en route to collide with the ship, was shot down. His plane left a dent on the side of the ship, but there were no American casualties. However, recognizing their shared roles as pawns in a larger, international game, the crew of the USS Missouri decided to honor the pilot with a navy funeral. Realizing they had no Japanese flags on hand, the crew stayed up all night sewing a red sun.

I read about how General Douglas MacArthur dropped a pen nib cover during the Instrument of Surrender signing ceremony—which took place on what would from that day forward be known as the Surrender Deck—but  was not willing to bend down and pick it up, as it would seem like bowing to the enemy. 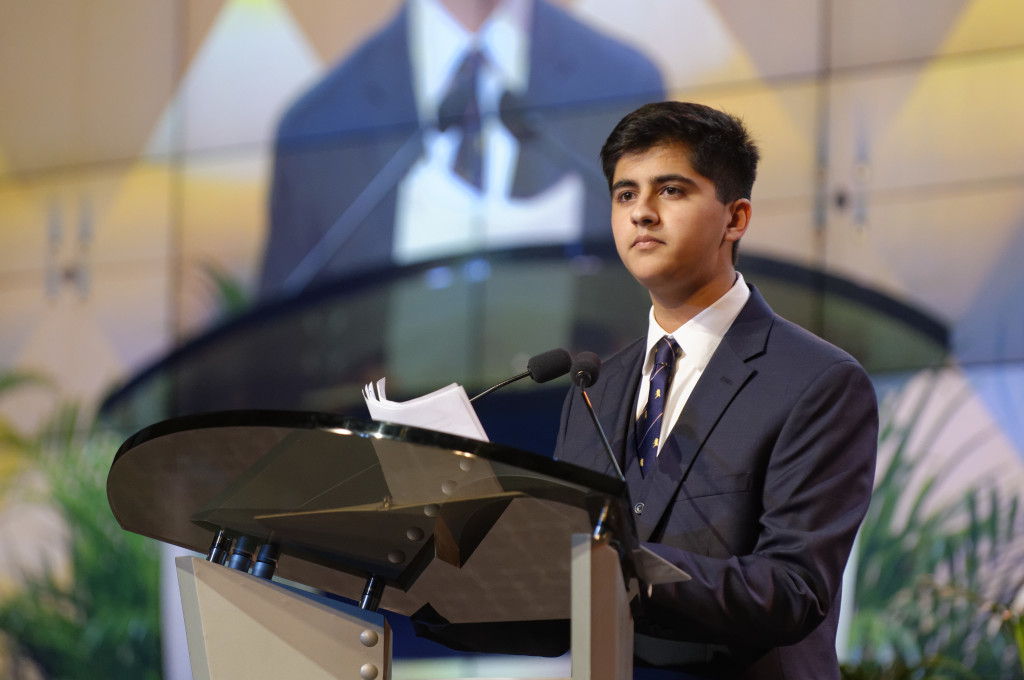 These stories filled my mind while writing my oral-history project. After it was submitted, and only a week before the Road to Tokyo grand opening, I received an email from the Museum that I had been selected as the student speaker for the VIP gala the night before the grand opening. Writing that speech in the next few days allowed me a chance to reflect on what I had learned throughout the process. However, what best gave me a sense of the importance of studying and exploring history was the experience of actually delivering the speech in front of more than 600 people. I was floored to see the knowing looks on the faces of veterans throughout the audience as I spoke naively of battleships and campaigns. I was warmed to see their smiles as I read a poem that was included in the oral history I had researched. I was especially surprised when, after leaving the stage and heaving a sigh of relief, I ran into a gentleman who turned out to be the chief historian at the World War II Valor in the Pacific National Monument (a National Park at Pearl Harbor). The next morning, I carried the Missouri state flag into the grand opening along with my fellow students with a new sense of its historical weight. On the flight home, I discussed with my mother how incredible it would be to actually see the USS Missouri at its resting place in Pearl Harbor someday. My experience at the Museum was over, but my journey aboard the USS Missouri had only just begun.

Fast-forward a month or two. My family was planning a spring break trip to Maui, Hawaii, and my parents told me we were planning a day trip to Pearl Harbor to see the USS Missouri and the USS Arizona. I was ecstatic. On top of being a WWII nerd, I could not wait to stand aboard the ship I had spent months researching. Finally, March arrived, and my family and I flew west toward beaches and battleships. 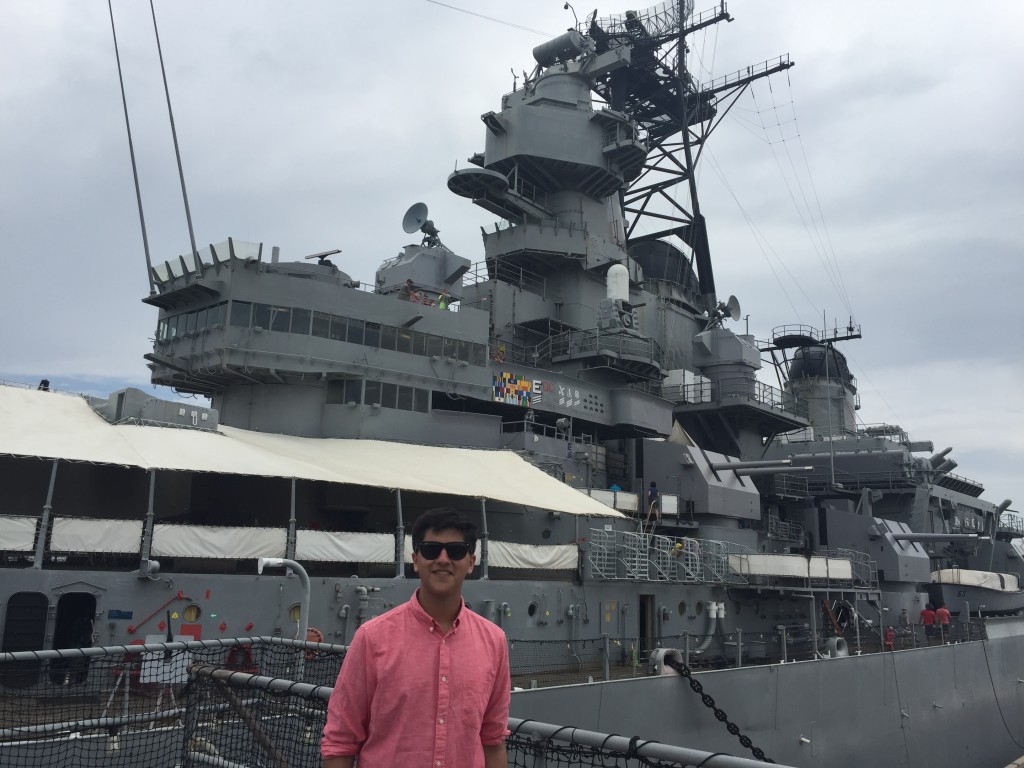 When we arrived at the Missouri, I was immediately struck by its size and majesty. Even by today’s standards, the Iowa-class battleship—the last of its kind—is considered a leviathan. I began to recognize many historical odds and ends I had encountered in my research. After a guided tour, I began to explore on my own. I went to the navigation room in the high decks of the ship and sat in what would have been James Starnes’s seat. I found the Japanese entry point where the tall men had stood (marked by two poles which stand closer together than the rest). I saw the dent made by the kamikaze pilot (which, after countless paint jobs and modernizations, still has not been removed). I even saw the place where General MacArthur signed the Instrument of Surrender and where the pen nib cover was later found. However, the most incredible moment aboard the Missouri for me was standing on the highest deck open for tourists, where one can see the USS Arizona Memorial, which I would visit in the coming hours. The green outline of the sunken Arizona can be seen directly off the bow of the Missouri. Some nearby guide was telling a tourist that the ships, one above and one below water, were positioned in this way so that the Missouri could watch over the fallen servicemembers still on board the USS Arizona.

This visual summed up my entire experience learning about the war in the Pacific. In one body of water off the coast of Hawaii, in one day, a person can visit a ship that witnessed the beginning of World War II in the Pacific theater and the ship that witnessed its end. To have stood atop both of those ships and to have captured a glimpse of war and its consequences continues to inform my decisions today. My oral-history project and my trip to The National WWII Museum served as the impetus for visiting Pearl Harbor. However, my experience at Pearl Harbor was also, in turn, deeply enriched by my oral-history project and my trip to the Museum.

When I left Pearl Harbor, I remember scribbling down a note to myself. While writing this blog entry, I found it and pulled it out. To me, it sums up how I felt immediately after leaving the park and what thoughts were rushing through my mind about the war in the Pacific. The note reads as follows: “The fire of World War II was ignited by blood and smothered by a signature.” 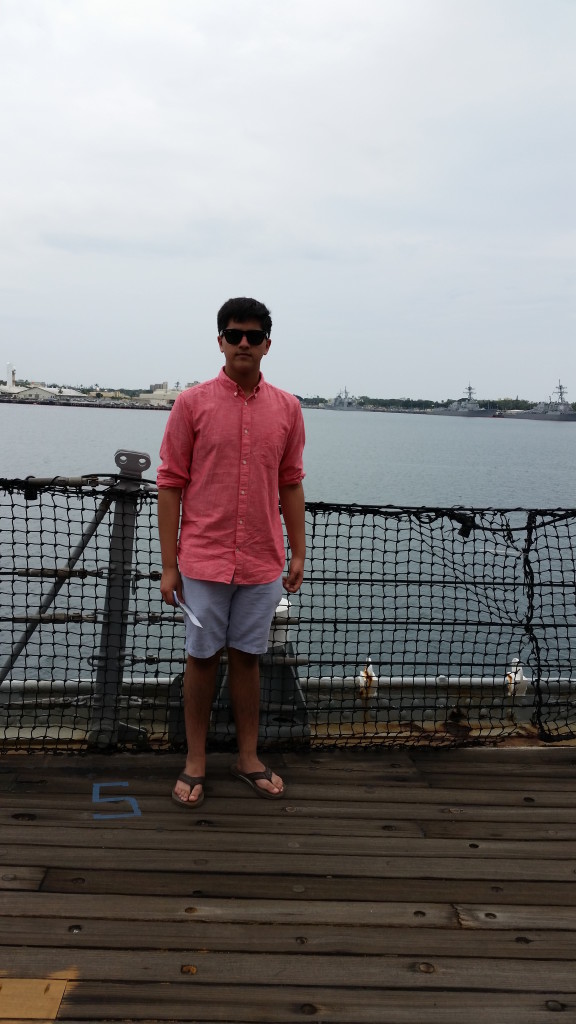