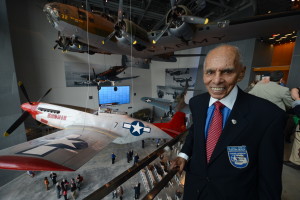 Dr. Brown with the P-51 Mustang replica painted in the likeness of the plane he flew during the war at The National WWII Museum in 2013. Today a restored P-51 Mustang hangs there as a tribute to his service.

A restored P-51D Mustang painted in the likeness of the “Red Tail” fighter Dr. Brown flew in the war is part of The National WWII Museum’s fleet of warbirds in US Freedom Pavilion: The Boeing Center. Dr. Brown is also featured in Fighting for the Right to Fight: African American Experiences in World War II, a Museum special exhibit now currently embarked on a two-year tour.

Dr. Brown was a “great friend of the Museum,” said Gordon H. “Nick” Mueller, PhD, president and CEO, recalling him as a repeated “distinguished and honored speaker” who participated in the opening ceremonies for the pavilion that now houses the tribute P-51.

“Roscoe Brown led a full and important life—a life of meaning,” Dr. Mueller said. “We all remember him as a leader, a man of courage, an educator, and an inspiration to all who knew him. He was a role model to African Americans throughout his life, and will continue to be.”

A Washington, DC, native, Dr. Brown attended Springfield College in Springfield, Massachusetts, departing the day after his graduation for training at Keesler Field in Biloxi, Mississippi. From there, he moved on to Tuskegee, Alabama, for further training at the Tuskegee Institute and Tuskegee Army Air Base.

In total, Dr. Brown flew 68 combat missions, a combination of strafing runs and escort missions for heavy bombers and P-38 reconnaissance flights. He downed a German jet near Berlin during an escort mission on March 24, 1945.

“As we got over the outskirts of Berlin, I first saw these streaks, which I knew were jets. . . . And they were coming up to attack the bombers,” Dr. Brown said in his Museum oral history, recorded in 2012. Brown executed a “reverse peel” to maneuver into engagement with one of the jets.

“He didn’t see me,” Dr. Brown said. “And then I turned into his blind spot, put on my electronic gun sight, and brrrrp—boom! There he was.

“The bomber-escort missions required a lot of discipline. They were longer missions in the main, and you knew you were doing good. . . . Escort missions gave us our reputation. We got the reputation of being so-called ‘Red Tailed Angels,’ because of the fact that we stayed close to the bombers.”

The success the Tuskegee Airmen achieved in battle became a symbol of bravery and skill, helping refute notions that African Americans were inferior performers in the military, especially in roles requiring advanced training. As the Airmen became well-known for their stellar flying record and distinctive aircraft, they were able to begin breaking racial barriers abroad and eventually at home. 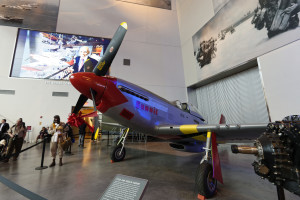 In April 2016, a restored P-51D Mustang painted in the likeness of the “Red Tail” fighter Dr. Brown flew in the war joined The National WWII Museum’s fleet of warbirds in US Freedom Pavilion: The Boeing Center.

Dr. Brown earned the Distinguished Flying Cross during World War II. In 2007, Brown and five other airmen accepted the Congressional Gold Medal on behalf of the Tuskegee Airmen. He earned a doctorate in education after the war and served as a professor at New York University, then served as president of Bronx Community College for 17 years. He later joined The City University of New York Graduate Center as director of the Center for Urban Education Policy.

“I am deeply saddened to hear of his passing,” said Tommy Lofton, the Museum historian and curator who conducted Dr. Brown’s oral history. “I was honored to have the opportunity to conduct an interview with him in 2012 for the Museum and spent the better part of that day enamored by his wartime experiences. I will always remember him and I feel that he is one of my personal heroes of the war.”