SciTech Tuesday: The Birth of the North Atlantic Air Route

One of the undersold stories of the Allied victory in WWII is logistics. Thousands of planes and millions of men, and countless tons of supplies made their way across large oceans to the battle fronts. Much of what and who made its way to Europe went by way of what might seem a strange set of hops across the North Atlantic. From Eastern Canada, to Greenland, to Iceland and then to Scotland, newly built airfields accommodated a great traffic moving mostly eastward.

Preparation for this effort began even before the US entered the war. The Destroyers for Bases agreement provided the beginning of this process. In May 1941 US troops from the First Air Force 21st Reconnaissance Squadron arrived in Canada. With them was Captain Elliott Roosevelt, the president’s son, who made surveys in Canada that led to several bases built there, and eventually to bases and airfields in Greenland and Iceland.

The curvature of the Earth, the Earth’s rotation, and prevailing winds make this North Atlantic route a relatively efficient path from North America to Europe. However, when it started use in Spring of 1942, losses were at about 10%. Winter weather over the North Atlantic is treacherous, and even in Summer it can be risky. Today planes fly the route at 30,000-40,000 feet, aided in their Eastward path by the jet stream. Decades ago the planes didn’t often reach those altitudes, and winds were more a hindrance than an aide. The National WWII Museum displays a B-17 named My Gal Sal in the US Freedom Pavilion: The Boeing Center. This plane made an emergency landing on the ice of Greenland when forced down in bad weather during one of the early flights on the North Atlantic route.

The development of the route led the US to explore Greenland, and purge the German troops thinly scattered across it. They were maintaining weather stations on the Greenland ice, and making forays into the seas to disrupt shipping. Eventually the US made its own weather stations and bases there, including three important airfields. These locations maintain their strategic importance today.

Air transport also took a route East across the Mid-Atlantic. This route was much longer, but less at risk from poor weather. Planes equipped with extra fuel tanks left southern Florida for Bermuda, stopping in the Azores before heading to Cornwall.

Great Britain had maintained troops and bases in Iceland for a few years by this team, in an uneasy relationship with the Iceland government. The US took over these operations in July of 1941, under an agreement with the government of Denmark. Construction on new airstrips was undertaken by both the Army Corps of Engineers and the Navy Seabees, and all bases were completed by late Summer of 1943.

The airfield at Reykjavik was turned over to the Icelandic government after the war and became a civilian airport. The base and airfield at Keflavik (formerly Meeks) became an important strategic part of NATO’s plans during the Cold War.

Today the North Atlantic route is highly regulated and one of the busiest corridors for air traffic in the world. Pioneered by very young pilots in the 1940s who couldn’t take advantage of all its benefits, the flyway today binds continents together today with primarily economic, and not military, exchanges. 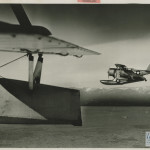 Two Coast Guard planes patrolling the coast of Greenland. The Coast Guard did much of the surveying and securing of the giant island. From the collection of The National WWII Museum. 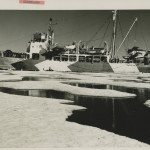 A Coast Guard ice breaker patrolling the coast of Greenland. The Coast Guard did much of the surveying and securing of the giant island. From the collection of The National WWII Museum. 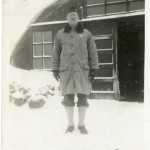 A Chaplain outside his barracks at a base in Iceland during WWII. From the collection of The National WWII Museum. 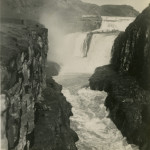 A waterfall in Iceland near Meeks base. From the collection of The National WWII Museum.

A period map of the routes used to transport by air in WWII. From Wikimedia Commons.