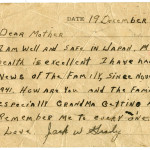 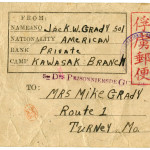 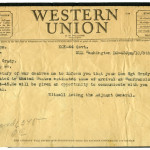 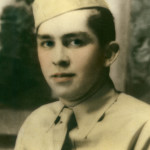 On April 9th, National Former POW Recognition Day, we remember the American men and women held captive during war. Over 120,000 Americans were held as POWs during WWII. 12,228 died in captivity. National Former POW Recognition Day, as designated by Congress, falls on the anniversary of the United States’ surrender on the Bataan Peninsula, beginning the Bataan Death March.

Pfc Jack W. Grady was captured in the Philippines and survived the Bataan Death March and captivity as a POW in Japan. The Museum recently received a collection of material from Grady’s daughter. This material includes over 60 postcards and letters send across North America to Grady’s parents after hearing a shortwave Radio Tokyo broadcast that Grady participated in while a prisoner. Also included are the short notes that Grady was allowed to send to his family, letting them know that he was still alive. In the postcard pictured above, Grady mentions not having received word from his family for over a year. This was all too common in the case of Pacific Theater POWs, whose average length of captivity was over three years.

Getting Around the Museum on History Day SciTech Tuesday: The Birth of the North Atlantic Air Route