Home Front Friday: Getting It Together

Did you know that April is National Welding Month? The secret ingredient that holds the world as we know it together, welding has sent us to the moon and back, produced monuments of steel where we work and live, and defended us in wartime!

The United States welding industry reached its peak in 1944. By then, it was producing twice the amount of war power than all of the Axis nations combined. Factories that had previously produced everyday products such as iceboxes and toasters were immediately converted to produce war machines. Auto manufacturers began producing tanks, trucks, guns, shells and parts for airplanes and ships. The aircraft industry had employed more than 2 million workers by 1944.

You may have seen the propaganda poster of the American cultural icon Rosie the Riveter gracing the walls of history classes or women’s studies classes. She has come to symbolize the can-do attitude of women left on the home front while their husbands were at war. Rosie most commonly appears on Howard J. Miller’s famous “We Can Do It!” poster for the Westinghouse Company. Another popular Rosie print is Norman Rockwell’s Saturday Evening Post depiction of Rosie, in which she is taking her lunch break while stamping on a copy of Mein Kampf. 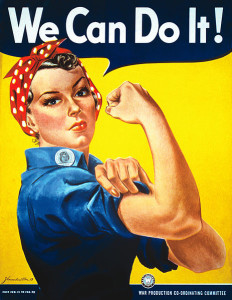 The Westinghouse poster. (via the National Archives) 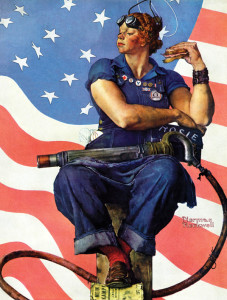 The Rockwell magazine cover. (via the Saturday Evening Post)

Did you know that Rosie has a friend? Her shipyard counterpart is Wendy the Welder, a similarly powerful woman based off of Janet Doyle, a worker at the Kaiser Richmond Liberty Shipyards. After the debut of the first all-welded ship in 1940, riveting ships fell out of style in favor of the quicker welding method. 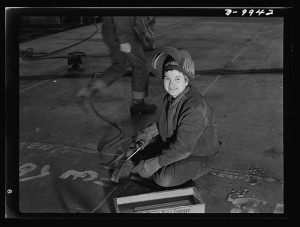 A Wendy the Welder at the Richmond Shipyard in California. (via the Library of Congress)

Want to know more about welding during the war? Click here to find out all about the industry!

Unfortunately, we don’t know how to weld, and we don’t want to tell you to do anything where you might hurt yourself. But we can show you how to make this nifty paper tank instead:

This definitely takes practice, so don’t be discouraged if you need to try a few times to get it looking right! Here is a video showing the whole procedure to help you along. Good luck!