SciTech Tuesday: Saving Lives with Design in the Blitz

This Saturday, March 19, would be the 115th birthday of John Baker, the British engineer who was given the title Baron and an award of 3,000 pounds (worth about 92,000 pounds in today’s valuation) for his design of an air raid shelter during WWII.

It is hard for us in the US to imagine how hard the Battle of Britain was on the struggling country. Between September 7, 1940 and May 21, 1941, the Luftwaffe dropped over 100 million tons of bombs on English cities. London was bombed the most, on average one of every 3 nights over 8 months. About 43,000 civilians were killed in those months, and about 3 times as many were wounded.

John Baker was an engineering professor at Bristol University when he designed the Morrison shelter, named after the presiding Minister of Home Security. Many Londoners had no space in which to place an in-ground structure, so Baker used his plastic theory of structural analysis to build a lightweight shelter that could be used in homes. With over 300 parts requiring 3 different tools to assemble, it was complicated, and the government provided them free to city-dwellers who earned less than 400 pounds a year. 500,000 Morrison shelters were distributed by 1942, and another 100,000 in 1943 in preparation for the German V-1 campaign. A study of a sample of bombed homes estimated that over 85% of the occupants had survived without serious injury.

Anderson shelters were used instead of Morrison shelters in places where residents could bury them underground. Made of galvanized steel formed into an arch, they could hold up to six people, while a Morrison shelter only held a pair of supine inhabitants. They were provided free to householders with an income under 300 pounds per year, and subsidized at a cost of 7 pounds to anyone with a higher income. About 2.1 million Anderson shelters were built during the war. 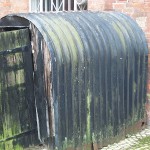 An Anderson shelter that served as a shed for many years after the war. 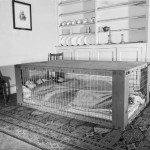 A Morrison shelter with a couple demonstrating its proper use.