Sci-Tech Tuesday: There WERE computers in WWII

I frequently hear, and sometimes read, people saying that there were no computers in WWII. This is completely untrue. Today we think of computers as digital electronic devices, and in particular, devices using some kind of semiconductor to make switches.

During WWII there were many kinds of specialized computers designed to use mechanical methods to make calculations. True airspeed calculators, firing tables, and dead reckoning computers are the most common examples. They are examples of slide rules, which were commonly used for mathematical calculations just a generation ago (I used slide rules in high school, until the TI-30 calculator was widely available, in 1980).

The history of computers goes back hundreds of year. The abacus is 4,000 years old, but doesn’t really make calculations or count, it just handily holds information for reference. Pascal built a computer to calculate taxes. Charles Babbage designed a difference engine, and Ada Lovelace figured out how to program it, but that was mostly theoretical, as he never really got a working version. Most of these devices used gears and wheels and dials to take advantage of mechanical models of mathematical relationships.

If you know any WWII history, that last description probably calls to mind both the Enigma machine, and Turing’s Bombe. The Colossus was the first electronic computer—and it was designed to work in concert with the Bombe to break the Enigma’s ciphers.

During WWII the US developed it’s own large computer. The Harvard Mark 1 was a electro-mechanical computer built by IBM based on a design by Howard Aiken, and influenced by Babbage’s earlier plans.

The Mark 1 used electricity to turn wheels on rotors, powered with relays and controlled by switches. It was basically a series of connected adding machines, with mechanical counters embedded. The first program run on it was written by John von Neumann, who was comparing the efficacy of implosion and gun mechanisms to trigger the first atomic bombs.

The Mark 1 was replaced in series by models up to IV. The Mark III included more electronic components, tubes and crystal diodes. The Mark IV removed all mechanical components, storing memory in magnetic cores. 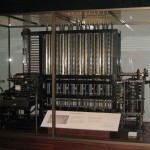 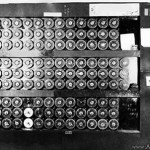 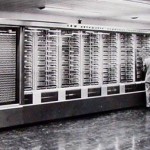 The Harvard Mark 1, built by IBM according to the plans of Howard Aiken. 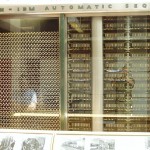 Link the Past to the Present with the 2016 Essay Contest! Scholarships to Spend the Summer Studying in Hawaii with Pacific Academy