SciTech Tuesday: Two inventions save lives in WWII, but are later abandoned due to side effects 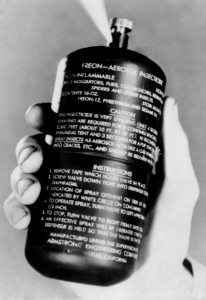 An early aerosol can of DDT insecticide (from Wikimedia Commons).

With millions of troops moving into tropical and subtropical campaigns, WWII military leaders and planners sought ways to fight diseases endemic to these regions. Two WWII era innovations were combined to save the lives of many combatants during the war years. Malaria was the primary concern at the time.

Malaria was commonly avoided by prophylactic treatments with quinine. Larger doses could be given to those known to be infected. Quinine came from the bark of a South American shrub that came to be grown on commercial plantations in the South Pacific. The Japanese occupied these plantations early in the war, and substitutes for it were less effective.

In 1939, Paul Hermann Muller discovered that dichlorodiphenyltrichloroethane (DDT) effectively killed insects. He began searching for a chemical insecticide in 1935, spurred by agricultural insect pests and an outbreak of typhus. After testing 349 compounds over 4 years (that’s persistence!) Muller found one that worked. In 1943 tests showed it to be effective against the mosquitoes that carried malaria, and the US Military started using it. At first they used hand pumps that pressurized a canister, and applying DDT this way replaced spraying fuel oil in streams and ditches. In 1948 Muller received the Nobel Prize in Physiology and Medicine for his discovery.

USDA researchers Lyle Goodhue and William Sullivan developed the first effective aerosol spray can in 1941. There were earlier patents for aerosol spray, but no one had yet made an effective disposable canister. Goodhue and Sullivan were looking for ways to spray insecticides, and found a way to compress chlorofluorocarbon gases in a can with the chemical to be dispersed. With a valve at the top that controlled emission of the contents, the active chemical was carried by the expanding carrier gas. 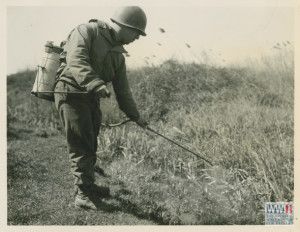 A US Soldier in Italy early in the war, spraying oil from a hand-pumped canister into a ditch to kill mosquitoes (from the collection of The National WWII Museum).

Combining DDT with a working disposable aerosol can, the US military was able to give its troops a way to spray inside tents, nets and clothes to kill mosquitoes (and just about all the other insects that came in contact). DDT helped cut down malarial and other vector-borne disease in the war, and soon eradicated malaria from North America and southern Europe.

DDT was less effective at killing malarial mosquitoes in Africa and other tropical areas where they breed year-round, and eventually the insects developed immunity. Later it was discovered that DDT was causing mortality in birds, and could act as a potent endocrine disruptor. DDT is a very stable chemical and breaks down very slowly, staying in the environment for a long time. In the early 1970s DDT’s use in the US was heavily restricted, and remains so.

In the 1970s scientists showed that chlorofluorocarbons (CFCs) used in aerosol cans and refrigeration, were causing a degradation of the ozone layer in the atmosphere. Ozone is a toxic pollutant at ground levels, but a concentrated layer of ozone high in the atmosphere shields the Earth’s surface from a large amount of ultra-violet radiation from the sun. Regulations in the US and around the world phased out the use of CFCs as propellants first, and then as refrigerants, by the late 1980s. Metal spray cans are more rare now, but they dominated the shelves of stores for many decades of the 20th century. 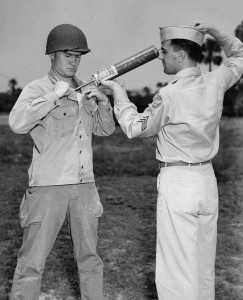 A soldier being sprayed with DDT from a pump-pressurized canister in WWII (from Wikimedia Commons).

DDT and aerosol cans served their important purpose in WWII, but were eventually dropped as technologies because of unintended consequences of their use. This is a common occurrence in the history of engineering and innovation.