SciTech Tuesday: Birth of The Slinky

In 1943 a Naval engineer named Richard James was working to make new kinds of springs. There was a need to protect sensitive equipment from the motion on ships and boats. James had built springs of a number of different sizes and materials.

There is a term for the accidental quirks of historical discoveries and innovations. That term is serendipity.

One of the springs fell off a shelf or table, and sort of ‘walked’ down a series of surfaces. With some further modifications over the next year, James optimized the ability of this spring to sort of flow once set in motion. James’ wife Betty named the special spring The Slinky. They formed a company, borrowed $500, and made 400 units, setting the price at $1 each. They were unable to get stores to purchase them, but convinced the Gimbels department store in Philadelphia to let them demonstrate them. At the beginning of the holiday shopping season of 1945, the couple set up an inclined board in the store, and demonstrated the properties of the Slinky. All 400 of the original units were sold in an hour and a half. That makes The Slinky 70 years old this holiday season. 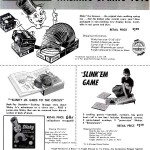 The vintage slinky came with instructions and ideas for how to play with the toy. From Wikimedia Commons 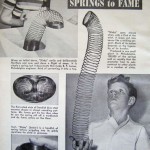 This is the original Slinky ad from 1946. From Wikimedia Commons

The Slinky was introduced to the national market at the American Toy Fair in 1946. James developed a factory and manufacturing process in upstate NY.

100 million Slinkies were made in the first two years of national marketing. The Slinky Dog, Slinky eyeglasses, and other Slinky products followed. So did marketing deals. Money flowed in, but James was not a great businessman, so debt mounted as well.

In 1960 Richard and Betty divorced, and Richard moved to Bolivia to become a missionary. He died there in 1974. Betty managed the company and moved its headquarters to Pennsylvania. In 1998 she sold the company and retired.

Betty died of congestive heart failure at age 90 in 2008.

Slinkies are used by educators everywhere to demonstrate wave and harmonic properties, including in workshops and lessons by the Education Department of The National WWII Museum.

Home Front Friday: Franksgiving Students Give a Salute to Courage