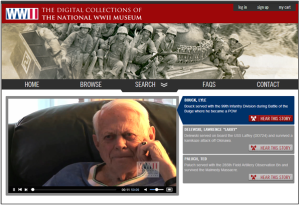 The Museum works tirelessly to preserve the stories of the WWII generation so that future generations will not lose the opportunity to hear and benefit from their significant experiences. Through studying this chapter of our past, we can become better, more responsible citizens of our communities, our nation, and the world. Every day, as we lose more of our living resources from the WWII era, so that the need to record, preserve, and share their stories becomes more urgent.

The Museum launched its Digital Collections Website in December 2013 (www.ww2online.org). The site currently contains segmented and annotated videos of oral histories from all military service branches, which are easily searchable by theater, branch of service, or keyword. Website visitors can also create personal accounts to which they can save photos and oral history clips – free of charge – allowing them to manage the resources to better facilitate their own research projects or personal interests. Currently there are 250 oral histories available on the website, covering a diverse range of WWII experiences.

More than 75,000 people from around the world have already visited the website, many of which have used our resources for educational purposes. By the end of 2016, we anticipate serving 200,000 visitors to the site, including teachers, students, authors, researchers and family members of veterans represented in our collections.

Digital access to the Museum’s vast collection of oral histories and artifacts is essential to bringing the lessons and values of World War II to individuals around the world who are not able to visit the Museum in person. The Museum’s Digital Collection has been made possible in part by a generous gift from The Hearst Foundations. 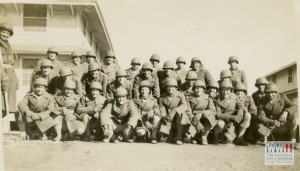 A large group of soldiers in winter coats and helmets pose for a photograph outside barracks at Camp Carson, Colorado. May 1944.  Part of the Museum’s digital collection.

The Hearst Foundations were founded by American newspaper publisher William Randolph Hearst in the 1940s to identify and fund outstanding nonprofits in the fields of culture, education, health, and social services. The Hearst Foundations seek to ensure that people of all backgrounds in the United States have the opportunity to build healthy, productive and inspiring lives. The Foundations have been a proud supporter of the National WWII Museum since 2002, contributing a very generous gift to the Museum’s Red Ball Express Education Program which brings WWII education and artifacts directly to the classroom.

Director of Grants at The Hearst Foundations, Mason Granger, had been involved with the Museum before its opening in 2000. As President and General Manager of WDSU-TV in New Orleans for a number of years, he became well acquainted with Museum Founders Nick Mueller and Stephen Ambrose in the late 1990s. According to Granger, it was “hard not to be inspired by their enthusiasm and passion.” Granger noted that during his tenure at WDSU, it was the commitment of then General Sales Manager Frank Ratermann that helped lead Granger to feel the station should get involved. Granger states that Ratermann’s support for the Museum and dedication over the years were “tremendous and contagious.” After leaving New Orleans for New York in 2007, Granger began his career at The Hearst Foundations, where his enthusiasm for the Museum continues.

According to Granger, the hallmark of The Hearst Foundations is to respond to the needs and priorities of institutions across the country. He believes that the Museum’s mission of honoring and preserving the history of the United States is exceedingly significant, and that The Hearst Foundations wanted to respond to the Museum’s vision and goal by aiding in the growth of the its digital archive. Granger states that the Foundation recognized the importance of the Museum being able to interact with the public on a broader technology level, so that the Museum’s priceless archives would be preserved and available beyond the physical institution.

Granger believes that the work the National WWII Museum does is vital and that he is “very privileged and proud” to be a supporter. Over his many years of involvement with the institution, he believes that his interactions with the Medal of Honor recipients during the Museum’s many celebrations stand out as his most treasured memories. “Their sense of mission and selflessness are certainly characteristics that affected all of us,” he said. “I could never forget those conversations.”

He went on to say that the Hearst Foundations’ engagement with the Museum is a unique opportunity, and that the efforts of President Nick Mueller in creating a relationship between the city of New Orleans and the rest of the world through such an important cause is worth celebrating. He believes that the Museum is playing an essential role in “preserving the heritage and legacy of individuals who were vital in saving the world. If we don’t preserve and protect their legacy then we lose a significant part of ourselves.” Granger concluded with the statement that The Hearst Foundations are proud to have the opportunity to honor these individuals through the digitization of the Museum’s collection. The Museum is proud that The Hearst Foundations have honored us with their ongoing trust and support.

The National WWII Museum is privileged to have the support of The Hearst Foundations in our expansion of our digital archive as a preservation effort for the Museum’s incredible collection of artifacts, oral histories, photographs, videos, and much more. Visit the site to see more!

SciTech Tuesday: We Can Do It! Donor Spotlight: Pam and Mark Rubin