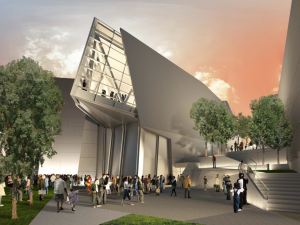 Rendering of the Liberation Pavilion

In 2018, as The National WWII Museum seeks to continue our immersive journey through all stories of World War II, the Museum will open the doors of the exceptional Liberation Pavilion. The pavilion will include three building levels that will span the closing months of the war and immediate postwar years, concluding with an explanation of links to our lives today. The first floor, Liberation, will provide visitors with opportunities to contemplate the joys, costs, and meaning of liberation and freedom. The second level, Victory, recalls the celebrations that followed the war’s end and the transition from war to peace. The third floor, Fruits of Victory, focuses on the present, drawing connections between World War II and its profound meaning for our world today.

One of the most significant features of the upcoming Liberation Pavilion will be the Liberation Theater, made possible through a generous gift by Mark and Pam Rubin.

Pam and Mark, who will be celebrating their 53rd wedding anniversary this year, met on a blind date set up by mutual friends. Not wanting to “waste” a Saturday night on a date that could be a flop, Pam agreed to see Mark at a Sunday brunch at their friends home, where he was dropping by before rushing off to a reception.  After meeting Pam, Mark never made it to the reception! It was a whirlwind romance and they married only eight months after that first meeting. They have three children and, now, four grandchildren. 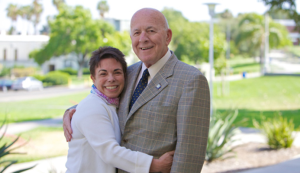 The Rubin’s first became involved with The National WWII Museum even before its inception at the celebration of Medal of Honor recipients held in Riverside, CA. Pam and Mark were guest of the Ray Ohrbach, then Chancellor of the University of California Riverside. While at an event the next day, the Rubin’s met Museum founder Stephen Ambrose, who sparked their interest.

The Rubin’s attended the Grand Opening of the US Freedom Pavilion: The Boeing Center in January 2013, where Mark was approached by trustees, Gov. Wilson and Ted Weggeland to become a trustee of the Museum. Mark gladly accepted. Later that year, the Rubin’s made an exceptional gift to sponsor the Liberation Theater to be featured in the monumental Liberation Pavilion that will begin construction next year.  The Theater will be a specially-designed space, 1650 square feet, with seating to accommodate approximately 75 people. A commissioned film, presented in a looped format, will celebrate liberation and mourn the sacrifice and suffering of the soldiers and the Holocaust survivors. The film will show Museum visitors that the ultimate victory and liberation of thousands of people were worth fighting for and come away with the of hope for a peaceful future.

The sponsorship of the Theater is near to the Rubin’s’ hearts, due to the fact that Mark is a Holocaust survivor. Born in Czechoslovakia, Mark spent his early childhood in hiding with his family.  He states “we were like bounty, my mother, brother and me. My father was in a different hiding place…so not to all get captured at the same time.” The daughter of the family who was hiding the Rubin family turned them in to the Gestapo for a reward. His father was captured the day before. The family was sent first to Sered, a transit camp, after which Mark’s father was able to bribe the Nazi officer to have he family sent to Terezin or Terezenstadt (north of Prague) which at that time had become a “model”  Red Cross camp.  The German’s had invited to Red Cross to inspect this camp to prove that Jews were not systematically being murdered, but were just isolated from the general population. The family spent 4 days traveling across the country in a cattle car. Though Mark was only seven years old at the time, he says, “you become an adult very quickly.” While in the camp, he had no knowledge of what was happening in the war. In April, 1944 Terezin was liberated by the Russian forces after the fall of Berlin.  When Terezin was liberated, 35,000 children had been there during the war — only 100 survived.  Mark, his brother, and his two cousins were 4% of the child survivors.

After liberation Mark and his family first settled in Bratislava, now the capital of Slovakia and then in Presov in the eastern part of Czechoslovakia.  When it became apparent that Communism was threatening the livelihood of the Rubin family, they requested and received visas to come to the United States.  They arrived on March 18, 1948 in New York.

Pam believes that supporting The National WWII Museum is important, not only to preserve the American experience in the war, but because “if not for the second world war, [Mark and I] would never have met. This is our place…all the happenings of that time in history created the opportunity for us to meet.” Pam’s parents married in 1940 and, in order to avoid the draft, quickly had a child. Unfortunately, Pam’s father was still drafted soon after her birth, and was sent to England for the remainder of the war. He did return safely in late 1945.

This connection, Pam’s family in the service and Mark’s family surviving the terrors of the Holocaust, has forged a lifelong bond between the two. This bond, and the hopes of “keeping this time in history alive,” has inspired them to support the Museum. Mark notes that “the work that this Museum does, and what it stands for…couldn’t be a better way to preserve that time in history. ” Pam believes that supporting the Museum’s education mission “is very important for todays young people and for all future generations,” and that the Museum is essential “for the people of our generation who were directly affected by the war.” She states, “we were victorious and it changed the world. It was fate for Mark and I to be a part of that time, and it should always have a place in world history.”

With their heartfelt and leadership support, Pam and Mark Rubin make sure that it does. We are grateful for their commitment to The National WWII Museum as it advances our journey along the Road to Victory.