Over the last decade, there have been an overwhelming number of movies and TV series that feature comic book heroes from America’s past. While Marvel’s Avengers might be the most famous band of superheroes, including the patriot Captain America, DC Comics is credited with creating the first team of superheroes, known as the Justice Society of America (JSA). Jay Garrick, the original Flash, is the group’s founding member.

In the winter of 1940 DC Comics introduced the JSA, but on December 7, 1941, DC Comics disbanded the JSA. According to the comics, a fictional President Roosevelt asked all heroes to directly support the war effort. While this didn’t quite literally happen, FDR quickly created the national sentiment that the entire country had to support the troops in order for the US to win the War. It should be no surprise that both Marvel and DC Comics reinvented their images. DC Comics, specifically, reinvented the JSA and created The All-Star Squadron and then later the Justice Battalion.

Comics often advocated for kids to support the war by buying war bonds or stamps. Both Marvel and DC Comics did this. While Batman, Superman, and Robin weren’t a part of the JSA, they were de facto members and in their own comics promoted the purchase of War Bonds with the World’s Finest Comics series: 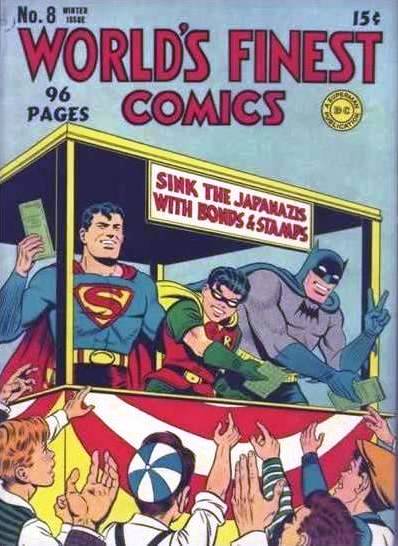 Superman, Batman, and Robin are Selling War Bonds to Children in this 1942 World’s Finest Comics Cover.

The sale of War Bonds to children was an important part of the American war effort. Children played a crucial role in supporting the troops from the home front; because they were younger, and obviously didn’t make a high salary, 25¢ War Stamps were advertised to them. Public and private schools alike even held “War Bond drives” in order to promote their sale. Schools would often turn it into a competition as well, and they encouraged students to bring all of their spare change in order to out-raise other schools. For more information about the sale of War Bonds during World War II, check out this link!

A special thanks to Cosmic Teams for their detailed profile of the JSA and their general history of DC Comics.

COUNTDOWN TO ROAD TO TOKYO: EXHIBITS WITHIN DOWNFALL Get in the Scrap! Featured Artifact: School Salvage Plan