COUNTDOWN TO ROAD TO TOKYO: EXHIBITS WITHIN PHILIPPINES 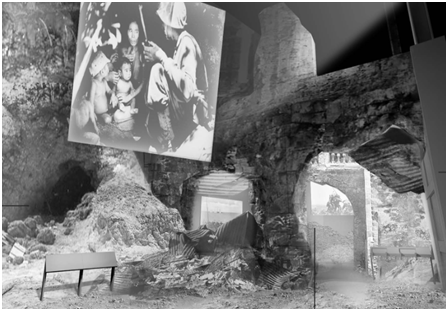 As we continue down the Road to Tokyo, and through the Philippines gallery, our final stop is the Battle of Manila exhibit, which will detail one the bloodiest urban fighting scenes in the Pacific Theater.

Aided by Filipino guerrillas, the Allied Forces savagely fought the Japanese for control of the capitol. Rather than engage in house-to-house combat, the Allies relied on heavy artillery barrages to defeat the Japanese. This led to the complete destruction of Manila, once called the Pearl of the Orient, and resulted in the loss of more than 100,000 Filipino civilians. The fierce struggle to wrest the city from the Japanese ended with the Allies securing Manila in March 1945.

The defeat in Manila, though catastrophic, brought the Allies one step closer to liberating the Philippines from Japan’s barbarous control. By projecting their power and escalating the level of violence, the Allies were able to push through the islands and continue on their way toward the Japanese mainland.

The Battle of Manila exhibit has been made possible through a generous gift by Madlyn and Paul Hilliard. 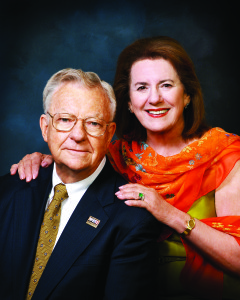 For more than a decade, Museum trustee and WWII veteran Paul Hilliard and his wife, Madlyn, have been two of the Museum’s most active advocates and supporters.  They have provided transformative support for several Museum initiatives, including the capital expansion, acquisition and restoration of artifacts, collection of oral histories, and education programs.

Paul is a Marine Corps veteran who served as a radioman/gunner in SBD “Dauntless” dive bombers in the Pacific. He turned 17 in June of 1942 and pleaded with his mother to authorize his enlistment in the Marines, finally, in February of 1943, she relented and Paul was shipped to boot camp in San Diego.  After more than a year of training in aviation radio, radar and gunnery, he was sent to the Solomons for assignment to an SBD dive bomber squadron.

In the Philippines the SBDs served as “airborne artillery” for General Krueger’s Sixth Army, assigned to dive bomb and strafe targets assigned by the army units attacking the Japanese on the ground. He flew many “Columbus missions,” named this because “we were unaware where we were going when we took off, we didn’t where we were when arrived at the target and when we returned to base we didn’t know where we had been. We did it all at the government’s expense.”

Paul said that when overseas, he knew little about events in the overall war beyond the view from their tent, their short mission briefings, or the unrecognizable sights from the rear seat of a dive bomber. Aside from that, brief summaries were fed to him about once a week in a crudely mimeographed news letter. He states, “we were mostly teenagers and much of our leisure was spent thinking about food, talking about food or complaining about food. The occasional cans of warm beer were a much-appreciated supplement.”

After being discharged, Paul states that he did not discuss the war for 40 years.  He states “to those of us who wore a uniform between 1940 and 1946, it seemed as if nearly every man in America had served and so it was so normal, so commonplace, that the subject seldom surfaced.” He stated that with almost 50% of able-bodied men in the United States in uniform, each played an important role in securing freedom. Paul states that he credits “Stephen Ambrose with reviving the discussion and the interest as his books shed light on specific anecdotes, on small-unit-actions, and on the long-lasting impact the War had and was going to have on world history.  Once I began to realize that I had been privileged to play a minor role in an enormous event, I became and still am, an assiduous student of WWII. The National WWII Museum has been and is an incredible opportunity to further my interest and to help tell the story of “the war that changed the world.”

The continuous support of Paul and Madlyn attests to their interest in and commitment to telling the story.  Madlyn says, “what is so rewarding about [the Museum], is its growth and the enthusiasm of the young visitors, their amazing knowledge of events in the War and their enjoyment of their visit. It’s contagious!!”

Paul says the Museum “tells the story of America at its best and of not only what Americans did during that War to ensure the freedom of millions around the world but to assure later generations that when fascism tackles freedom, freedom is going to come out on top. And whatever we have done or are doing to assist in spreading and trumpeting that message, is done from a sense of gratitude rather than generosity.”