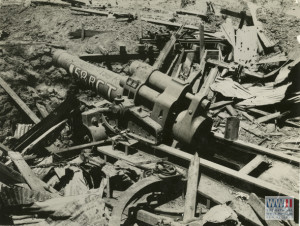 12″ Japanese artillery piece captured by the 158th RCT at Cuenca, Batangas in the Philippines in 1945

As we continue down the Road to Tokyo, we stop next at the powerful Philippines gallery, which will cover the major events of the American campaign to retake the Philippine islands, offering a special opportunity for observing the build up and outcome of the biggest naval battle in World War II, Leyte Gulf.

The Philippines gallery will include five major exhibits: America Returns, Destroying the Japanese Navy, From Leyte to Luzon, Battle of Manila and Leyte Gulf Theater. Computer interactive timelines will immerse and fascinate visitors as they map out events, and a computer interactive Dog Tag Experience kiosk will allow visitors to trace how the war affected a specific service member throughout his time in the Philippines. In addition, each exhibit will display unique interactive features and artifacts that will engage visitors in this remarkable story. 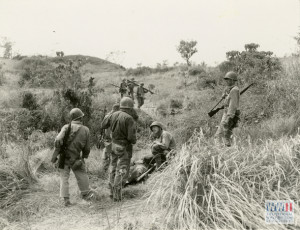 The Philippines gallery has been made possible through a generous gift by The Charlie and Janette Kornman Charitable Fund.