As we continue down the Road to Tokyo and through the Philippines gallery, we first stop at the America Returns exhibit which will detail General Douglas MacArthur’s return to the Philippines with Filipino forces in a joint military landing on Leyte in one of the largest amphibious operations in the Pacific.

“I shall return!” General MacArthur proclaimed after being ordered to leave the Philippines by President Roosevelt in 1942. As loyal Filipinos endured more than two years of brutal Japanese occupation, MacArthur remained fixed on his objective. The general was determined to avenge his defeat, but also argued that the United States had a clear moral obligation to liberate the American commonwealth. He further maintained that recapturing the Philippines would threaten Japan’s lifeline from Southeast Asia, including its vital oil supplies. Finally, the Philippines would provide bases for future operations—with a willing and able Filipino labor force.

The America Returns exhibit within the Philippines gallery has been made possible through a generous gift by Mr. and Mrs. Harry A. Donovan. 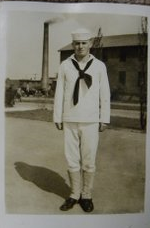 As a member of the VFW, the Homeless Veterans of Akron, and the American Legion Organization in Ohio, Harry Donovan is quite familiar with the importance of supporting Veterans’ causes. It was through one of these organizations that Harry heard of The National WWII Museum. He and his wife, Fran, first visited the Museum in 2009 for the opening of the Solomon Victory Theater. After becoming a Patriot’s Circle member of the Museum in the years following, Harry pledge a major gift in 2014, choosing to sponsor the America Returns exhibit within the new Road to Tokyo galleries.

Harry served in the South Pacific during WWII. He entered into the Navy at age 17, after begging his mother to sign for permission. He went in “without any skills, a junior in high school, gave up [his] education and went overseas, because [his] country needed as many men as they could get” but states that he has “never been sorry” of his decision. For his two years in service, Harry was on a ship that made 7 invasions to a various islands in the Pacific. His main post was as a Higgins Boat driver, delivering men from the main vessel to shore.

Before the captain would order men ashore, Harry was to surround all Ally vessels the night before the attack and set up smoke pots in the water, so that Japanese aircraft could not see the ships below. On one such night, Harry spent hours setting up the smoke decoys and headed back towards the main ship. However, the entire fleet had left the Island, leaving him and two other men behind in their small craft. Harry and the men spent 4 days without food or water offshore of an extremely dangerous Japanese Island, waiting for the return of their fleet. On the fourth day, Harry spotted an LST boat (Landing Ship, Tank) nearby, and went aboard for dinner and a shower. The Captain of the LST boat urged Harry and the men to stay the night on the ship, but Harry did not want to leave his craft alone at night. When Harry and the men returned to the LST boat the next morning for breakfast, a Japanese attack to their ammunition room left 90% of the crew dead, a reminder to Harry that it was prayer and “his God that got [him]through it.” 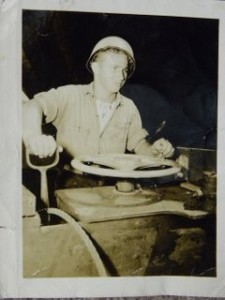 Harry had another close call during his service as well. The vessel he was on was struck by an enemy attack, and the force threw him against the bulkhead of the ship. He awoke in the Sick Bay, and was told that although he was only 17, he would not be able to walk again. After 3 months of boredom in bed, and sheer determination, Harry got up, walked down to the galley kitchen, and made breakfast for the entire crew. Not only was he able to walk, but from then on, he became a Navy cook, a task he said he adored.

Harry states that he “gives half of his income to Veterans” every year. When asked why he supports the National WWII Museum specifically, Harry states that his purpose in life “is to acquaint people with what WWII did for America. It truly made America the nation it is today.” He said that his involvement with the Museum, from getting lunch with President Nick Mueller in Florida, to his hours long oral history recording with Tom Gibbs, to his correspondence with Major Gifts Officer Abbie Sumners, has been incredibly beautiful.

The Museum is fortunate to have the encouragement of Harry and Fran Donovan. We are grateful for their support of our Road to Victory Capital Campaign and the expansion of the Museum campus.