COUNTDOWN TO ROAD TO TOKYO: FROM LEYTE TO LUZON 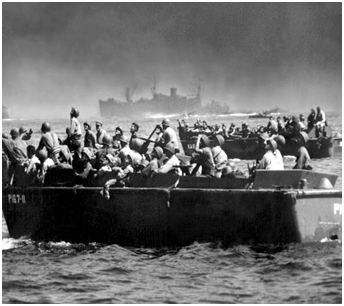 As we continue down the Road to Tokyo, and through the Philippines gallery, we stop next at the From Leyte to Luzon exhibit, which will detail the invasion of Luzon at Lingayen Gulf, an intense battle with many American casualties.

The US Navy prevented Japanese reinforcement in Ormoc Bay at Leyte, and inflicted severe losses on the Japanese forces. The Japanese retaliated with deadly Kamikaze attacks, which then became a frequent threat to US amphibious operations. Adding to the sense of crisis, Americans began to receive field reports that the Japanese were executing Allied prisoners behind enemy lines. The exhibit will discuss some of the successful military operations used to rescue American prisoners being held at Cabanatuan by the US Rangers with the help of Filipino forces.

From Leyte to Luzon will examine the American re-capture of the Philippines in 1944. Allied forces here would endure some of the toughest fighting of the war, and lost close to 14,000 in the the Philippines campaign. Many more would be lost due to tropical diseases.

The Philippines also saw one of the few successful airborne raids in the Pacific when the 11th Airborne dropped in to help liberate over 2,000 civilian and military personnel from the Los Banos prison camp. The Philippines would be officially secured in January 1945.

From Leyte to Luzon has been made possible through a generous gift in honor of Lt. George R. Cannon and his shipmates aboard the USS DuPage.