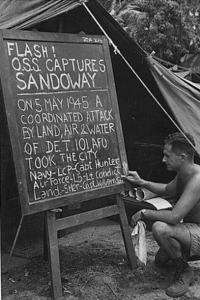 Pfc. Edeleanu prints news bulletin on bulletin board outside Intelligence tent of Kyaukpyu Camo the day before OSS, AFU, and departure via convoy for Rangoon.

As we continue down the Road to Tokyo, and through the China-Burman-India gallery, we stop next at two exhibit spaces detailing the military efforts to keep China in the war as well as discussing the importance of Sino-American Cooperative Organization and the Office of Strategic Services during the first years of the war in the Pacific.

This exhibit will tell the story of the critical logistical and military efforts made by the Allies to keep China in the war. This includes support for the Kuomintang government within a divided China, and General Stilwell’s pivotal role in dealing with the political challenges encountered in Nationalist China.

Keeping China in the war against Japan was essential for the success of the United States in the Pacific Theater. Allowing Japan to reap the benefits of Chinese resources could have been potentially hazardous to the war effort in the Pacific. General Joseph Stilwell entered the region in 1942 and worked to coordinate the Chinese and US efforts on the ground. The 10th, 14th, and 20th Air Forces all had units in the area to help with the effort. Operation Ichi-Go, carried out by the Japanese was a successful attack and seizure of multiple US Air bases in China.

Lacking the major battles of the European and Pacific theaters, the China-Burma-India campaign’s importance lay in keeping the Japanese from further expanding their empire. China was the next domino to fall to Japan, and that could have made it more difficult for American forces in the Pacific. 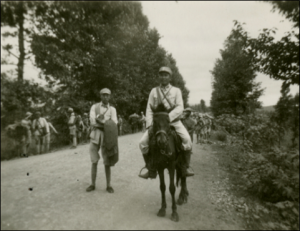 This exhibit will describe the Sino-American Cooperative Organization and the Office of Strategic Services during the first years of the war. By attaching to the 14th Air Force, OSS expanded intelligence gathering, set up networks behind enemy lines, conducted “black propaganda,” and provided Chennault with target data and pilot rescue service. The exhibit closes with a personal story on General Johnny Alison.

The Office of Strategic Services (OSS) was important to the success of Allied military operations in the China Burma India Theater. The OSS activated a special branch for military operations called Detachment 101. Detachment 101 authorized behind the lines covert action against Japanese forces in Burma and in China. General Stilwell’s Chinese forces were able to take advantage of covert resources, as well as Wingate’s Raider. Merrill’s Marauders took advantage of covert intelligence, the knowledge they ascertained was critical because it allowed them to conduct their missions successfully. The OSS also helped facilitate different local guerilla groups that were against Japanese expansion. The OSS’s was critical to success in the China Burma India Theater because it allowed for Allied forces to coordinate in an unconventional way. As a result of the terrain and the Japanese ability to remain undetected, covert activities were essential in intelligence gathering. Covert intelligence also helped in rescuing downed US Airmen in the area.

Behind the Scenes of We’re All in this Together! Home Front Friday: Celebrate Your Dog…Tags!