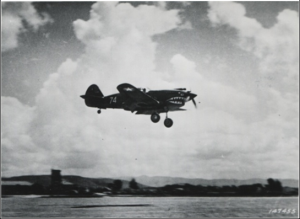 As we continue down the Road to Tokyo, and through the China-Burman-India gallery,we stop at our final exhibit of the gallery which will detail the role of the United States Armed Air Forces and their critical assistance in securing Allied success in CBI.

This exhibit portrays the important role of the USAAF in the China-Burma-India campaign. The exhibit will discuss the successes they had against Japanese air attacks early in the war, and how the 10th AF provided critical transport and air support to British, Chinese, and American forces while conducting raids against key Japanese targets in Southeast Asia. This exhibit will also tell the detailed story of the famous P-40 Flying Tigers. Created under authority of the U.S. government, the Flying Tigers were the most successful Allied fighter squadron in the Pacific at the time, flying under contract with the Chinese government and using a warning network and unorthodox combat tactics. Finally, the exhibit will unveil the history of the “Aluminum Trail,” the air route over Himalayas, which acted as the only means to ferry men and supplies into China.