Remember the End of the War 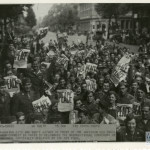 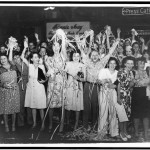 Photo courtesy of Prints and Photographs Division, Library of Congress, 1945. 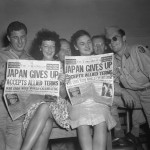 As the nation marks the 70th anniversary of the end of World War II, this month’s Calling All Teachers e-newsletter highlights several ways to explore the war’s final days in your classroom.

Our V-J Day Fact Sheet provides a concise overview of the conclusion of the war in the Pacific. We also have fact sheets about many other wartime events as well as broader topical overviews and primary source-rich lesson plans, including a photograph-based World War II timeline lesson that takes students from Japan’s 1931 invasion of Manchuria through the war in the Pacific and Europe, the dropping of the atomic bombs in August 1945, and Japan’s formal surrender on September 2, 1945, when the United states officially celebrated V-J Day.

This month’s newsletter also showcases oral histories from the Museum’s Digital Collections related to the atomic bomb and V-J Day. In addition to former naval officer James Starnes’s firsthand account of the Japanese surrender ceremony aboard the USS Missouri and former Congresswoman Lindy Boggs’s recollections of end-of-the-war celebrations in Washington, DC, students can listen to Enola Gay navigator Dutch Van Kirk recount the dropping of the atomic bomb over Hiroshima. Manhattan Project scientist Lawrence Johnston provides another perspective on the dawn of the Atomic Age.

Finally, the August Calling All Teachers details our fall field trip lineup, which include our STEM and Victory Garden field trips as well as a new trip concentrating on our special exhibition Fighting for the Right to Fight: African American Experiences in WWII.

Learn more about these and other field trip options and get more classroom resources and ideas by signing up for our free monthly e-newsletter Calling All Teachers and following us on Twitter @wwiieducation.