COUNTDOWN TO ROAD TO TOKYO: CHINA-BURMA-INDIA 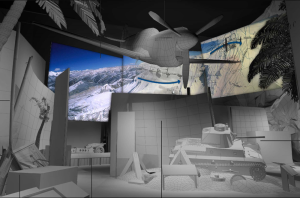 As we continue to travel down the Road to Tokyo and out of the Island Hopping gallery, visitors will stop next at the China-Burma-India gallery, which details the important campaign led by the Allies to prohibit the Japanese from further expanding their empire.

The China-Burma-India gallery provides an overview of the campaign to halt Japan’s determined western advance within China, Burma, and India from 1937-1942. The gallery will explore the tactics used by the Allies to stop the Japanese from controlling these countries, including keeping China in the war, the important role of pilots and air power, as well as an overview of Special Forces operations, including those involving the Office of Strategic Services.

The gallery will feature rare artifacts, exhibits and interactive elements. Exhibits will explore the collaboration between Chinese and American military leadership and present the major developments in the planning of air attacks in difficult environmental conditions.

The gallery will feature four exhibits that will use immersive environments, rare artifacts, and interactive elements to captivate and educate visitors about this important, and often untold, story of the Pacific war. The exhibits include Strategic Importance of CBI, Logistics, Raiders and Covert Ops, and Flying Tigers/Air Power. 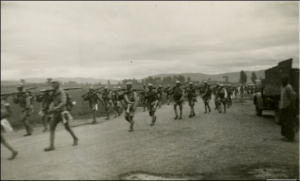 This exhibit will provide an overview of Japan’s early advances in the CBI theater and the Allied campaign to limit further expansion. Events highlighted within the exhibit include discussion of the Chinese forces under General Stilwell fight in Burma, the retreat to India, the closure of Burma Road, and the Chinese army and guerrilla units’ five-year struggle against the Japanese in mainland China. The exhibit also highlights the importance of China’s role in the war. The majority of Japanese army strength was occupied in China, and American air power in China was a key strategy in 1942-43.

The Strategic Importance of CBI has been made possible through a generous gift by the Brees Family in honor of Col. Eugene W. Brees II, US Army. 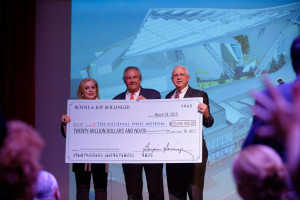 The China-Burma-India gallery has been made possible through a generous gift by Joy and Boysie Bollinger.

Twenty years after first becoming involved with The National WWII Museum, Boysie Bollinger remains tireless in his support. In his work on the Museum’s Board of Trustees, Bollinger has lobbied government officials, potential donors, friends, and anyone who will listen to support the Museum. On March 24, 2015, he and wife Joy led by example with their own donation to the Museum of $20 million.

Ranking among the top donations in the country to a non-profit organization or museum, this is the largest private gift ever received by the Museum. The gift will be used to add an iconic architectural piece to the Museum’s six-acre New Orleans campus: the Canopy of Peace.

Bollinger calls the Canopy “the finishing touch” to the Museum’s expansion. The Canopy will symbolize the hope and promise unleashed by the end of WWII hostilities. Commanding attention on the New Orleans skyline, the 150-foot-tall structure will also unify the Museum’s diverse campus in the enduring spirit of the wartime slogan, “We’re all in this together!”

Bollinger’s passion for the Museum is easily noted through his unwavering commitment to telling the story of the Greatest Generation. Bollinger states “what these people did for us is mindboggling. I worked every day of my life with two uncles that fought in the Pacific, neither one had ever mentioned a word about it. It forced me to go sit with them and make them tell me their stories. I never would have had that experience without being involved here.”

Remember the End of the War Home Front Friday: Cut! That’s a Wrap!