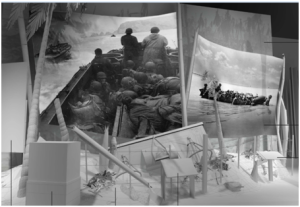 As we continue down the Road to Tokyo and through the Island Hopping gallery, which will detail the incredible amphibious landings made by Allied forces as they engaged in efforts to clear the Japanese resistance from the Aleutians, through New Guinea, and the outer rings of the Gilbert, Marshall, and Marianas island chains. Throughout, the exhibits will communicate both the broad strategic complexity of the island hopping campaign and the individual bravery and leadership of the service members who took part in it.

The first exhibit within the gallery is Strategic Overview, which will give a detailed overview of the major events of the post-Guadalcanal Island Hopping Campaign and the importance of the Air War in the Central Pacific. Island hopping was an innovative American military strategy in the Pacific. It created the pathway for American forces to close the vast distances of the Pacific and bring the war to Japan itself.  Visitors will learn about the intelligence planning that orchestrated these island invasions and the brutal fighting and challenges which American forces met on the Road to Tokyo. 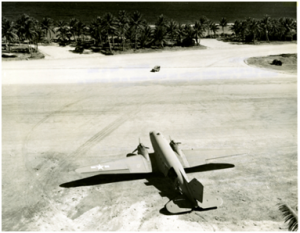 A Douglas R4D bomber on the airfield at Majuro Island, a tiny atoll near Kwajalein in the Marshalls in May 1944.

Following Strategic Overview, the New Guinea exhibit will explore the arduous battle through New Guinea’s jungles as the Allies counterattacked the Japanese and secured key points along the island’s northern coast. Initially making little progress, Australian and American forces gradually advanced with breakthroughs at Buna, Gona, and Sanananda, as well as the destruction of Japanese forces in the Battle of the Bismarck Sea. Visitors will discover the significance of New Guinea as a catalyst for the Island Hopping campaign.

Next week, we explore the remaining exhibits within the Island Hopping gallery.