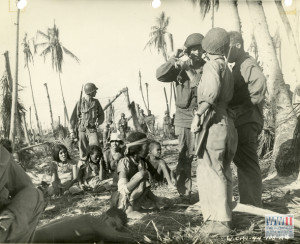 As we continue down the Road to Tokyo and through the last half of the Island Hopping gallery, we come upon two exhibit spaces detailing the invasions of the Marshall and Marianas Islands, which brought Allied forces one step closer to victory in the Pacific.

This exhibit will detail the major events and importance of the invasion of the Marshall Islands and Truk, including Kwajalein Island, which were critical to penetrating Japan’s “Outer Ring” of defenses. The Japanese were quick to learn how to reinforce their beach defenses, and subsequently,  island invasions grew more costly to the US. Countering this, the US submarine force responded dramatically with increasing numbers and efficiency in their attacks. US subs began destroying large numbers of Japanese merchant ships, troop transports, and warships, effectively harming the enemy’s industry and war effort. 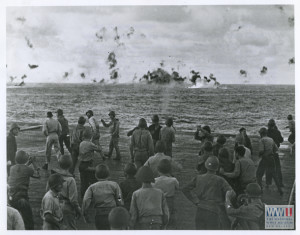 Pilots and crewman aboard a U.S. Navy carrier cheer as guns strike a smashing blow to a Japanese plane in the Marianas on 22 February 1944

In the Marianas exhibit, visitors will learn of the critical campaign in 1944 to take the Marianas Islands away from the Japanese. Key battles discussed within the exhibit including the amphibious invasion of Saipan, the destructive naval Battle of the Philippine Sea, and fighting for Guam and Tinian. The strategic value of the Marianas will be dramatically displayed, as the Americans used these islands as air bases to strike and wreak devastation through B-29 attacks directly on mainland Japan. In addition, the exhibit will document the role and success of Native American code-talkers on Saipan.

Stay tuned next week as we enter into the China-Burma-India gallery.