A busy year in Distance Learning

It was another successful school year for the Museum’s distance learning programs, reaching over 25,000 students near and far. This year, the Museum also launched its webinar series for adult life-long learners. With a wide array of programming, there’s something for every audience interested in connecting with the Museum, no matter the distance.  As we’re hard at work planning programming for the coming months, here are some of the highlights from this past year in distance learning: 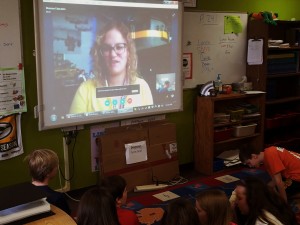 A Mystery Skype program with students in Wisconsin.

This year’s series of free student webinars featured diverse topics such as production on the Home Front, the Holocaust, the Battle for Iwo Jima, and the race to build the atomic bombs, welcoming special guests to share their unique perspectives.

Educators from the Yankee Air Museum helped viewers explore the historic Willow Run plant,  which churned out almost one B-24 per hour at its peak production levels.

On International Holocaust Remembrance Day, students posed questions to survivor Luna Kaufman, as she advocated to listeners, “You have to open your eyes and arms to other races, other religions, and other cultures to see that we are all equal and that we all need to work with each other because that’s the only way this world will survive.”

The 70th Anniversary to the day of the Flag Raising on Iwo Jima, connected students with the National Museum of the Marine Corps and one of their veteran volunteers, Frank Matthews, who recounted what it was like to land, fight, and survive on the volcanic island.

In May, graphic novelist Jonathan Fetter-Vorm shared his debut book Trinity: A Graphic History of the First Atomic Bomb alongside Museum educators demonstrating the powerful scientific principles behind the development of the weapons.

Explore these and all of the archived student webinars at any time. 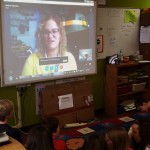 A Mystery Skype program with students in Wisconsin. 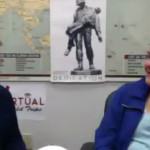 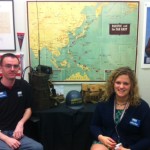 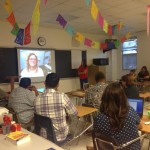 Teachers learning how they can use Skype in their own classrooms.

The Museum set a new record for furthest Skype connection, with primary school children in Havelock North, New Zealand. That’s  7,647 miles away from New Orleans and 17 hours ahead in time.  Students participated in the Museum’s Mystery Skype program. Their task is to guess the location and subject of the Museum by asking yes- or- no questions and using only a world map. It’s fun and challenging geography guessing game! Once they solve the mystery, they are taken on a virtual tour of the US Freedom Pavilion: The Boeing Center with a Museum educator.

Check out Mystery Skype and all of the Museum’s interactive Skype programs.

Launch of the Adult Learning Webinars:

Distance learning isn’t just for students anymore. With the successful launch of our Adult Learning Webinar programs, eager life-long learners from all across the globe get inside access to the Museum, expert staff, and special guest presenters. One of highlights this year was the in-depth series commemorating the 70th anniversary of the Battle for Iwo Jima. Over three separate sessions, participants interacted with Museum curators, educators, and historians, while examining artifacts not on view to the general public and listening to veteran oral histories from the Museum’s Digital Collection.

Want to take part? Viewing is easy—all you need is a computer with high speed internet connection. Test it out by viewing a recording of yesterday’s Adult Learning Webinar with writer James Scott about his book The War Below: The Story of Three Submarines that Battled Japan. Or, you can register for our next Adult Learning Webinar on August 20th, featuring the Museum’s upcoming special exhibit, Fighting for the Right to Fight: African American Experiences in WWII and curator Eric Rivet.