In our last blog post of the Road to Tokyo countdown, we covered the Life Aboard Ship exhibit within the New Naval Warfare gallery. Let us now examine a few more WWII stories of naval warfare in the Pacific that will be unfolded in this immersive space.

Immediately following the brutal Japanese attack on Pearl Harbor, American Admiral Thomas Hart declared unrestricted submarine warfare against Japan. Submarines were lethal weapons for both sides and played a crucial role in the fighting. This exhibit will explore the changes in submarine boats and the technologies they used as the war progressed. The US submarine force comprised just 1.6% of naval personnel, but accounted for the highest fatality rate of any US service branch at 22%. Sinking tremendous amounts of Japanese tonnage, the submarine force was the key to drawing the noose around Japan. Through oral histories and computer interactives, the exhibit will explain the dangers of submarine life and combat, while also conveying the pride and honor of belonging to these highly-skilled crews. 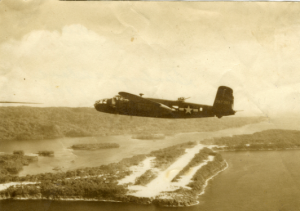 B-25 Mitchell bomber in flight

The Doolittle Raid was America’s first offensive attack on Japan, and one of the most famous American missions in the Pacific. It was also the first time the US launched bombers from an aircraft carrier into combat. Sixteen planes bombed military and industrial targets in Japan. Though the mission inflicted minimal damage, the raid served to bolster American morale and shake the confidence of the Japanese. The Japanese called units back to their home islands for defense, weakening their presence elsewhere in the Pacific. Using personal stories and artifacts, this exhibit will tell the story of the Doolittle Raid from its planning stages, to the fates of the aircrews, to the aftermath of the raid which spurred a devastating retaliation in China. 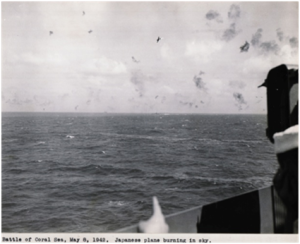 As the first naval battle fought entirely by aircraft, the Battle of the Coral Sea is a key example of the new naval warfare of World War II. For the first time in history, two fleets engaged in combat while never being within eyesight of one another and never having fired directly at each other – all strikes were delivered by aircraft launched from aircraft carriers. Both sides suffered costly losses. This exhibit will provide detailed information about the locations of the fleets, aircraft routes, and the ship and aircraft losses on both sides. The battle ended in a draw, but the Americans achieved strategic victories. By preventing the invasion of Port Moresby, it was the first battle that contained the Japanese expansion. The battle also reduced Japan’s carrier power, which would prove to be significant in the Battle of Midway.