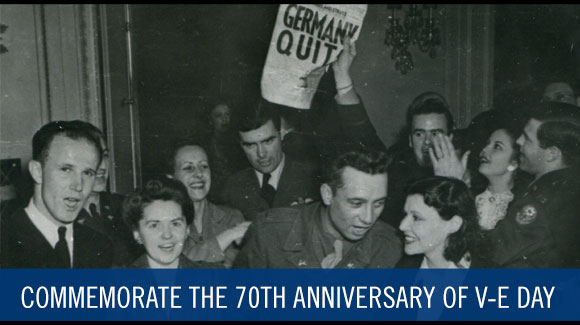 On May 7, 1945, the surrender of Germany was announced, officially ending the European phase of World War II. Allied leaders decided that May 8 would be celebrated as Victory in Europe Day (V-E Day). Join us the first week of May as we celebrate the 70th anniversary of V-E Day with a variety of events.

The Republic of Austria was incorporated into the Third Reich on March 13, 1938, after the invasion by the German Wehrmacht. During World War II Austrians fought in the Wehrmacht, participated in the Holocaust, and suffered from Nazi oppression and Allied bombing. By and large, public opinion in the “Ostmark” supported the Nazi regime to the end of the war. The territory of what would be called Austria again was liberated by the Red Army from the east, American forces from the north, and French forces from the west. On the basis of the Allied Moscow Declaration, the Provisional Renner Government proclaimed the re-establishment of Austria on April 27. Four-power Allied occupation government was finally established in September 1945 and continued until 1955. The road from war to independence seemed interminable for the Austrians. Guenter Bischof presents.

Join us for an enlightening evening as the grandchildren of General Dwight D. Eisenhower come to discuss their grandfather’s legacy and his experiences during the war.

Moderated by Dr. Keith Huxen, the Museum’s Samuel Zemurray Stone Senior Director of Research and History, the panel will discuss Eisenhower in his role as Supreme Commander and chief amongst the liberators—including his personal encounter with the Holocaust as he inspected the camps at Ohrdruf and Buchenwald. One of Eisenhower’s lasting legacies as leader of the Allied Forces was to force soldiers, civilians, and media to tour the sites themselves in order to have eyewitnesses, written records, and photographic evidence of Holocaust crimes.

Can’t make it to this event? Livestream it.

On May 8, 1945, World War II ended in Europe. While the mood was exuberant in neighborhoods, work places, and with families throughout the country, it was a bittersweet day—war still raged on in the Pacific and many veterans recall that they were being re-assigned to prepare for the invasion of the Japanese mainland.

The Museum will commemorate this important anniversary of World War II with speakers who will recollect receiving the news, footage from newsreels from 1945, and historians reflecting on the meanings and legacies of Victory in Europe.