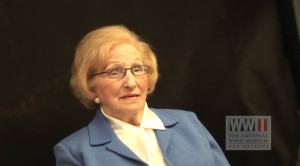 Charlotte Weiss is a Holocaust survivor of Auschwitz. Her oral history can be found online at The Digital Collections of The National WWII Museum at ww2online.org.

70 years ago in April 1945, Allied troops across Europe continued to find and liberate the prisoners of Nazi concentration and death camps. The horrific extent of the Holocaust was revealed as people all over the world learned about camps like Ohrdruf, Buchenwald, Bergen-Belsen, and Dachau. To many soldiers, including General Eisenhower, the discovery of these camps reaffirmed the Allies’ moral justification for defeating the Nazis and other Axis countries. The National WWII Museum has powerful stories from Holocaust survivors and soldiers who liberated some of the camps in its collections, as well as photographs, and other classroom materials to help teachers present personal stories and explore larger ethical questions connected to the Holocaust.

The Digital Collections of The National WWII Museum currently contains two interviews from Holocaust survivors. Eva Aigner was born in Czechoslovakia in 1937 and fled to Hungary during the war. Her detailed account of life in Budapest and the liquidation of the ghetto there is a chilling story of escalating and deadly anti-Semitic policies in Hungary, and her family’s desire to survive at all costs. Charlotte Weiss‘s compelling story includes meeting the infamous Dr. Mengele in Auschwitz and being liberated by the American Army. Both women went on to dedicate their lives to speaking and educating others about the Holocaust and promoting tolerance.

There are also several oral histories with US soldiers who vividly recount liberating some of the concentrations camps. For German-American Karl Mann, Dauchau was an unforgettable “example of man’s inhumanity to man” and soldiers like Don Jackson described making the German townspeople come in to the camp to bury the numerous bodies they found. Photographs of camp conditions can also be found on ww2online.org.

Teachers who have their students read The Diary of Anne Frank and other personal accounts might also be interested in our virtual field trip and special guest webinar about the Holocaust. “The Holocaust: One Teen’s Story of Persecution and Survival” virtual field trip is offered year-round and details the life of Anne Frank’s step-sister, Eva Schloss, who survived Auschwitz. A recording of this January’s student webinar with survivor and activist Luna Kaufman is also available for classroom viewing.

Other resources include the free downloadable lesson plan “When They Came for Me”  which uses Pastor Martin Niemoller’s famous quote and sources about WWII resistance movements to explore questions about personal and collective responsibility about the Holocaust. A one-page fact sheet, WWII Timeline lesson, and a link to The United States Holocaust Memorial Museum’s traveling exhibit, Deadly Medicine, are also available to help teachers provide students with a basic overview of the Holocaust and Nazi racial policies, and an understanding of these within the larger context of the war.

Finally, think about registering for one of our professional development opportunities. Each Spring and Fall, the Museum hosts the Anti-Defamation League’s Echoes and Reflections Holocaust multimedia program. Be sure to check our teacher workshop page to learn more about this and other future workshops.

For additional ideas and resources for Holocaust Remembrance Day (April 16) and Month, please visit our Education Blog, follow us on Twitter @wwiieducation and sign up for our free monthly Calling All Teachers e-newsletter.